Royal BC Museum scientists look to plant region’s biodiversity in the history books
May 11, 2016 11:43 AM By: Bronwyn Scott 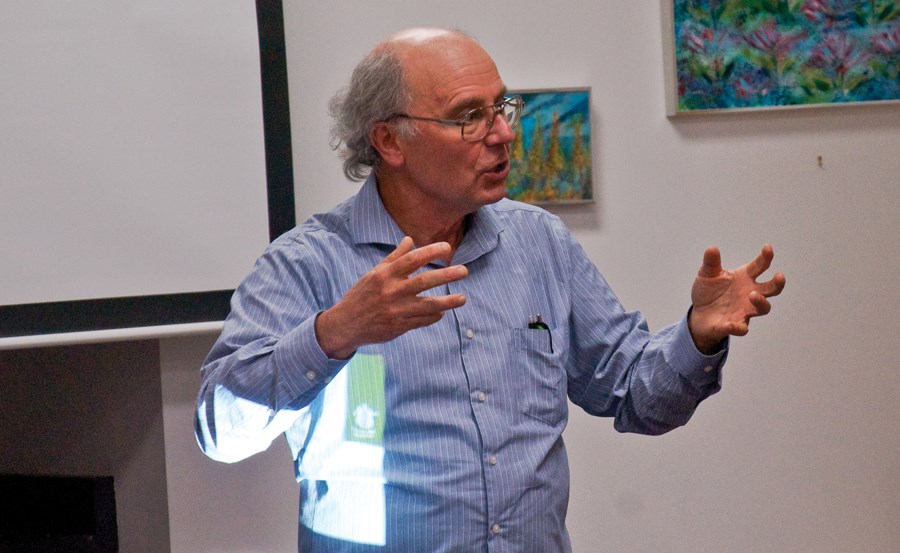 Dr. Richard Hebda, curator of botany and earth history at the Royal BC Museum in Victoria, presents some of his findings on the biodiversity in the Peace to a crowd of about 75 people at Peace Gallery North in Fort St. John on May 4.Bronwyn Scott

The living landscape of the Peace is making its way into the history books thanks to Dr. Richard Hebda of the Royal BC Museum and his team that’s researching the region’s biodiversity with the help of locals.

Hebda, curator of botany and earth history at the provincial museum in Victoria, has been studying plant life in the Peace for several years. He’s now working to make sure the Royal BC Museum is not just telling a Lower Mainland story, but a true British Columbian story, incorporating the unique ecosystems and vegetation of the Peace Region.

“Our main interest is the high elevations and what kind of plants grow there and what they can tell us about whether, or how covered, the area was by the last glaciation,” he said in an interview with the Alaska Highway News.

“Then that tells us something about how deep our roots of the life of our landscape go: How long have those plants been here? Do they represent some kind of lost worlds of the ice age?”

For the first time – “because very few people have done any collecting”—researchers are documenting what plants grow where in the Peace, and essentially “putting dots on maps where there were no dots, not because the plants weren’t there, but nobody ever looked,” he said.

On Wednesday, May 4, about 75 people crammed into Peace Gallery North in Fort St. John to hear Hebda give a free public lecture on the biodiversity of the region.

The following day, in the atrium at Northern Lights College in Fort St. John, he led a discussion about the region’s living landscape, and encouraged the community to contribute their knowledge of the species that live and grow here.

“I really enjoy being here and meeting the people of the Peace, and we hope to hear their stories on a regular basis,” Hebda said.

“We’ll be coming here more often and trying to work with the people in the region, we’re looking forward to it.”

Some of the team’s findings will be on display in the permanent gallery in the Royal BC Museum, but the more detailed accounts will be found in scientific papers and in magazines.

“It’s an exciting area for new discoveries,” he said.

Hebda also gave a talk at the Tumbler Ridge Public Library on Thursday, May 5.

Hebda has been with the Royal BC Museum since 1980. He also holds a faculty position at the University of Victoria’s School of Earth and Ocean Sciences.

Residents interested in contributing their knowledge to the project are encouraged to email peaceproject@royalbcmuseum.bc.ca.