'Shrek the Musical!' hits the stage

The world’s most famous ogre has come to the Energetic City. North Peace Secondary School students are performing “Shrek The Musical!” – based off the famous movie series.
Dec 10, 2014 9:21 AM By: William Stodalka 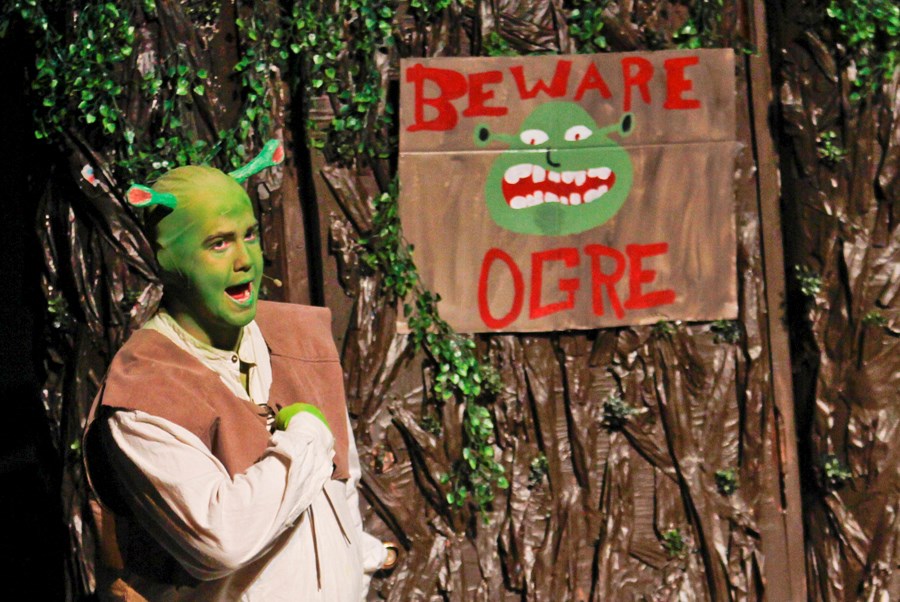 The world’s most famous ogre has come to the Energetic City.

North Peace Secondary School students are performing “Shrek The Musical!” – based off the famous movie series.

Emry Mika, the director of the play, said that it is the first time the school has done the musical. Its rights only became available to high schools in the last few years, she added.

The story involves the ogre – an outcast in the kingdom of Duloc – tasked to rescue a princess in an effort to get fairy tale squatters out of his home.

Putting on this musical was somewhat difficult, since the teacher’s strike forced them to put off three weeks of preparation.

As well, Shrek is “a spectacle piece so there is tons of costumes, lots of props, and intricate sets.”

Thankfully, the students were “some of the strongest” Mika has ever worked with.

“They’re fantastic, focused and dedicated so they’re really easy to work with and get stuff done.”

One of those kids was Aaron Duke. Having previously starred in high school productions of “A Midsummer Night’s Dream” and “Willy Wonka’s Chocolate Factory,” he now will play the famous green fellow.

“It’s so much fun,” he said. “I like Shrek because he reminds me a lot of me … people see him as just a big scary green ogre, but he’s a guy who wants to be known, who wants to have friends.”

Duke said that despite this, Shrek knows that he’s not supposed to.

“I can see a lot of that in me, too,” he added. “I have a lot of friends who just see me as Aaron Duke, this guy, but I have good friends who know me and see me so well.”

To get ready, Duke has had to do “a lot of training.”

“I would be singing voices all the times to get it at the right pitch so I wouldn’t bust (the audience’s) ear drums,” he said.

“There’s a lot of times where I’ll be singing his songs and I actually broke down crying once.”

Duke must do all this with a green spray on makeup, to boot.

So far, the public seems receptive. According to him, when he came out as the character in the recent Fort St. John parade, people were calling out “Shrek” to him.

Mika was optimistic that people would enjoy the play.

More shows will appear at the North Peace Cultural Centre from Dec. 11 to 13.