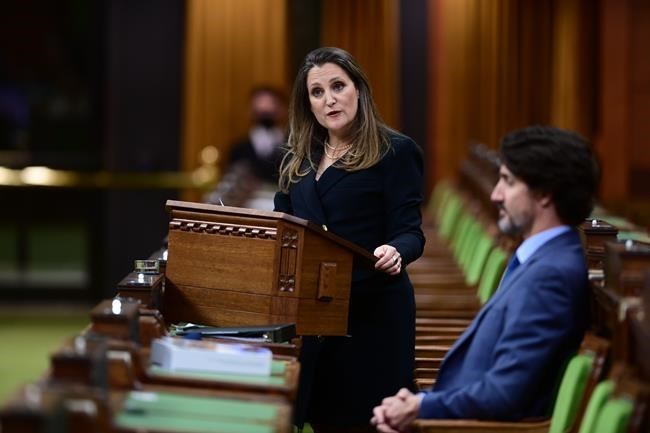 MP Bob Zimmer was still adding up all the new zeroes in the latest federal budget on Tuesday.

The first in more than two years, the 725-page budget released by Finance Minister Chrystia Freeland on Monday adds $101 billion in new spending over the next three years, posts $509 billion in deficits over the next two, and doubles the federal debt to $1.4 trillion by 2026.

“The Covid response, initially you couldn’t fault [the Liberals] for spending a bit there in crisis, but when you see them botch the Covid response as they have, and see other countries where we’re seeing them getting back to normal, there’s a couple of costs that are much more than money.”

“The answer to it, what these guys are doing, is spend a lot of money to make people feel better, I suppose, but our constituents don’t want to get more government cheques — they want to get back to work,” Zimmer said.

Much of the new spending is for a broad range of social programs, with $30 billion for national daycare arguably its highlight component. The plan aims to see an average drop in fees next year by 50% for preschooler daycare spaces, and has an ultimate goal of $10 a day child care across the country.

The government says the move will help thousands of mothers return to the labour force after their numbers dwindled due to daycare closures during the pandemic. Zimmer says how the plan will be delivered is something that he'll be paying attention to.

"When we were in government we always thought parents should have the choice, give every parent the same amount of money and let them make their decision," Zimmer said.

"It’s unfair just to give money to somebody that’s working out of the home. Well there's mothers and fathers that work in the home and they should be able to utilize that money as well if they choose to make that decision to stay home. They’re still paying taxes."

The first five years of the plan will focus on support for not-for-profit providers, leaving out for-profit centres and unregulated care.

After year five, the budget says the government will work with provinces and territories to revisit funding needs based on what the money has purchased to that point.

"All families will pay for the plan, but only families who choose or can access the type of care the federal government favours receive the subsidized benefit," said Andrea Mrozek, a senior fellow at the faith-based think-tank Cardus.

"The proposed plan devalues the work parents and other caregivers do outside of an institutional setting."

Spending would start at just over $3 billion a year, not taking into account the government's pre-existing 10-year spend on child care unveiled four years ago.

Funding rises from there to reach almost $8.4 billion in new spending in 2026, with the government promising $8.3 billion annually thereafter. The budget projections stop at 2026, after what the document describes as an initial five-year agreement designed to have the federal government cover half of national child-care funding.

At 725 pages, the budget includes a long list of various spending pledges that many view as a pre-election platform targeting a wide variety of voters, from seniors and their caregivers, to parents and business owners. Other spending highlights include:

- $18 billion over five years for aboriginal communities, including $6 billion for infrastructure, and $2.2 billion to help end the tragedy of missing and murdered Indigenous women and girls;

- $17.6 billion to promote a "green recovery", including $5 billion for industries to reduce emissions;

- $3 billion over the next five years to improve long-term care standards;

- $1 billion over six years to the Universal Broadband Fund to support a more rapid rollout of broadband projects;

- $500 million to create a tourism relief fund to support investments by local tourism businesses in adapting to and recovering from COVID-19;

- $200 million to establish a fund to combat anti-Black racism and improve social and economic outcomes in Black communities;

- $154.6 million to limit the spread of COVID-19 in federal correctional institutions;

- $180.4 million over three years to support student bilingualism across the country;

- $116 million over two years to address the opioid epidemic and other substance-abuse concerns;

- $101 million over two years to help wineries adapt to ongoing and emerging challenges.

Who pays the debt?

Federal debt charges, meanwhile, will nearly double to $39.3 billion by 2025, from $22.1 billion projected this year.

“What that means to people, and hasn’t been said enough, is that means your taxes are going to go through the roof, because somebody’s got to pay for this,” Zimmer said.

“We’re seeing a tightening of development and a dramatic increase in spending. That is unsustainable to say the least.”

Zimmer says the budget does include $1.9 billion for trade corridors, but only 15% of that is dedicated for the north. That works out to just $285 million, or about the price of a new Taylor Bridge, he said.

“The alarming part of all this spending, for me, is usually when you see money spent, you like to see things get built at times when the economy is down — roads are getting done, bridges are getting done for a better day,” Zimmer said. “You make that investment when times are tough. When we’re seeing all this money go out the door and very little visible infrastructure, we’re just wondering where the money’s going.”

Zimmer said he was pleased to see an increase to Old Age Security for seniors 75 and older, including a one-time $500 payment in August, and a 10% increase in regular payments by next summer.

“That’s been a long time coming and I’m glad they’re finally recognizing the importance of seniors and the needs that seniors have,” Zimmer said.

“We’ve always argued to spend the money where it's going to make a difference if you’re really wanting to tackle illegal firearms in urban centres,” Zimmer said. “This seems to be a good move but we’ll see how this rolls out.”

The budget also includes a number of new taxes on digital services, foreign homeowners, as well as "luxury" vehicles over $100,000. The new vehicle tax will affect workers in the northeast, Zimmer said.

"What’s a $100,000 truck to some in a place like Vancouver or Toronto, well that’s a work truck in our neck of the woods,” Zimmer said. “I think a lot of our folks up here that buy a work truck are going to be stuck with a bit of sticker shock.”

The budget has the early support of NDP Leader Jagmeet Singh, while Conservative Leader Erin O’Toole says he will be proposing amendments to the budget.

Many will be watching the budget debates closely, Zimmer said.

“I think a lot of Canadians are watching to see if there’s going to be an election spurred because of this,” Zimmer said. “I’m not sure yet.”