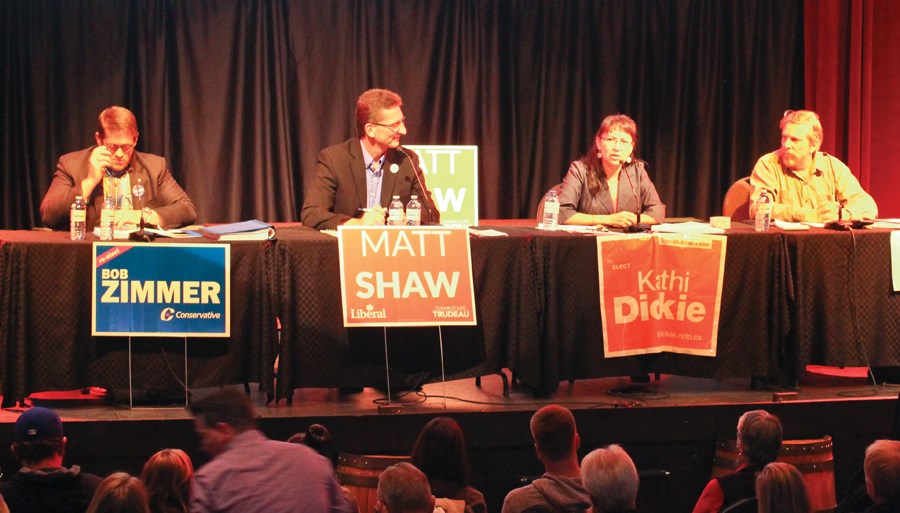 At the beginning of Tuesday night’s federal candidates debate in Fort St. John, about half of the 200 attendees who packed the Lido Theatre raised their hands when asked if they were undecided on their vote.

By the end of the two-hour debate, only a dozen or so shot up when the question was asked again.

Four candidates competing to become the next MP for Prince George-Peace River-Northern Rockies – one of the largest ridings in the country, with one of the longest names to match – took to the stage for two hours of questioning.

Two other candidates – the Green Party’s Elizabeth Biggar and Libertarian candidate Todd Keller – could not attend.

Candidates took questions from the news media and local residents. At times, the debate was polite and concise. At other times, candidates traded barbs and were drowned out by applause and partisan jeers.

Here are some highlights:

The most heated exchanges came over a question on calls for a national inquiry into missing and murdered Aboriginal women.

According to one statistic from the RCMP, 1,181 have gone missing or been killed since 1980.

All three opposition candidates want to see an inquiry held.

“It’s a bloody national emergency, and it’s a genocide on a small scale,” said Shaw. “(An inquiry) is the biggest priority we can put our energy into.”

Blackman and Dickie both support an inquiry.

Dickie, a former Fort Nelson First Nations chief, reiterated an NDP pledge to call an inquiry within the first 100 days of taking office if elected.

“Women are still going missing today. They are still being murdered,” she said.

“We need an inquiry to get to the root causes of those things.”

Zimmer agreed with Dickie on the statistics, calling them “shameful” but opposed the call for an inquiry.

“If I thought an inquiry would save one life, one life, I would absolutely do it,” he said, saying his government is already taking action on the issue. “There have already been 42 studies that have been done. The key is that we respond to it."

Zimmer said that “one of the major drivers” on the issue was a lack of economic activity or lack of jobs on reserves.

“Ultimately, when people have a job, they’re not in despair and they can stay on the reserve,” he said. “We want them to be happy where they live and go from there with their families.”

Zimmer’s answer prompted criticism from Dickie, who said she was “flabbergasted” by Zimmer’s comments.

LISTEN TO AUDIO OF THE EXCHANGE BELOW

“We had almost 1,200 women murdered because they didn’t have a job, and they wouldn't stay on the reserve?” Dickie asked, adding she knows of four women who have gone missing or been killed, cases that remain unsolved.

This prompted Zimmer to ask if Dickie had read the RCMP study on missing and murdered indigenous women, calling the study “comprehensive.”

“I’ve lived the life of an Aboriginal woman,” she responded. “I don’t need to read the study.”

JOBS AND THE ECONOMY

On the economy, Matt Shaw echoed the Liberal party’s line on deficit spending, saying governments should scale back when times are good and spend to stimulate the economy during recessions.

Justin Trudeau is unique among federal leaders for saying he would run deficits to pay for infrastructure spending.

Zimmer maintained that the country is not in a recession, saying his government will continue to balance budgets short of a serious downturn.

As in the Dawson Creek debate, Zimmer said that opening up new markets was key to the region’s economic stability.

Kathi Dickie didn’t dive into the deficit discussion, but argued the federal government should find ways to encourage innovation in the region as a means of breaking the cycle of boom and bust.

On infrastructure, she said the NDP would increase the gas tax by one cent to pay for projects that are often downloaded onto municipalities, acknowledging the idea would likely be unpopular with the crowd.

Zimmer was in the headlines often ahead of the election call for a whirlwind series of infrastructure announcements for the region.

Three out of the four candidates stuck with their party lines when Fort St. John resident Olga Gregoire posed a question on marijuana legalization.

Zimmer was quick to respond with his opposition, while Dickie spoke in favour of decriminalization, not outright legalization.

Shaw supported legalizing the drug, even though he believes nobody should use it.

However, Shaw called marijuana use a “victimless crime.”

“Is it really the role of the federal government (to punish marijuana users) because they choose to use a weed that grows just about anywhere?”

“The war on pot is retarded,” he said. “You can’t call a person a criminal if they’re smoking weed. That’s something they’re doing to themselves.”

Blackman used the word as a pejorative three times throughout the debates, despite warnings from the moderator.

A question about personal security versus personal liberty was also raised.

“You’ve got a lot better chance of getting hurt by a moose than a terrorist,” he told the crowd, which garnered applause. “We’re spending all this money on terrorism, but it’s all nonsense.”

Zimmer defended the bill, saying it allows the government to crack down on people who are recruiting for militant organizations, such as the Islamic State group, on social media. He said it does not target dissent or free expression.

“It’s on specific individuals that have already done something bad,” Zimmer said.

Dickie also criticized the bill, saying judges could issues orders “that can stomp on a person’s Charter of Rights.”

Blackman considered the government to be “playing a fear card,” with the bill, but added that the bill was needed.

“We need to be very careful with it,” he said.

—with files from Jonny Wakefield