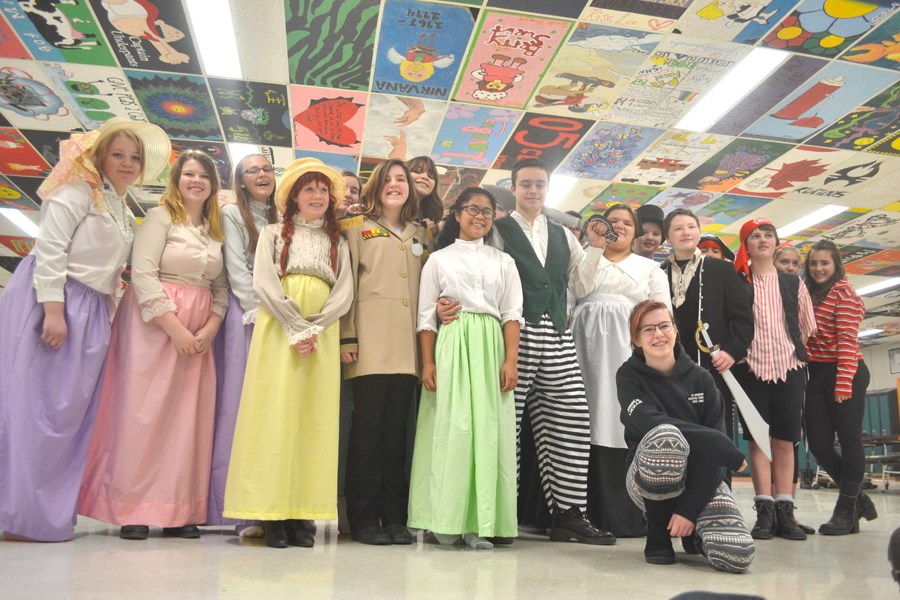 The pirates will be at the North Peace Cultural Centre from Jan. 15-17.David Dyck

If you’re in the mood for some adventure on the high seas, Dr. Kearney Middle School has you covered. They’re finishing off rehearsals for the annual school musical, this time treating audiences to their own swashbuckling take on Gilbert and Sullivan’s classic Pirates of Penzance.

“It is kind of a flagship for Dr. Kearney,” said Katie Matthews, the play’s director. “Over the last 15 years or so they’ve been putting on musicals, and it’s been whatever teacher that has been here has been doing it, so I’ve had some pretty big shoes to fill,” she said.

Last year was her first year in the role, and she put on a rendition of High School Musical. This year she said that besides many of the characters in Pirates of Penzance being interchangeable male and female roles, she also wanted to go with something a little more “classic.”

“Who doesn’t love pirates? Who doesn’t love sword fights? It’s a traditional love story; it’s a traditional Gilbert and Sullivan adaptation. They kind of paved the way for musical theatre and I wanted to bring some of that back into the musical,” said Matthews. “[The students] love musicals, but they wanted Pitch Perfect or Frozen, and this kind of brings it back to the more classical roots of musical theatre.”

“They were all gung ho for pirates and police officers and fighting, but getting them back into the 1800’s mindset of how people would act and what would be scandalous and what would be appropriate and how they would act . . . That kind of stuff was pretty hard for them to get their brains around,” said Matthews. “But I think that now that we’ve been practicing it for a solid three and a half months, we’re getting there.”

The teachers' strike dragged the summer break an extra several weeks, compressing the timeline and leaving only a week for auditions, but Matthews said the play has come together well.

“It’s actually very stressful with all the homework, we have tests coming up, we have to work really hard for this play,” said Elysia Cruz, who is playing the female lead. “But Miss Matthews gives us time, she helps us with all that. Overall it’s okay, it’s manageable.”

This is Cruz’s debut acting performance, and said she is “catching on.” Her co-lead, Spencer Prieur, was in last year’s High School Musical, and is playing Frederic in the upcoming performance. “I think it’s a fun piece, there’s a lot of adventure and a lot of comedy, and the romance itself is kind of funny, too,” he said. “I think I’m going to be ready, I’m feeling confident this year.”

Asked if he was doing anything to prepare for the North Peace Cultural Centre stage, he said that he was getting his family to help. “I’ve been kind of doing pieces in front of my family,” he said. “I’ve been acting it out for them, trying to stay in character and kind of roll with the crowd.”

The school band makes up the pit orchestra, with help from the community. Art teachers are putting together the sets and they have costume designers and musicians helping tweak the score.

It's a massive undertaking for volunteers.

The musical runs Jan. 15–17 at the North Peace Cultural Centre.