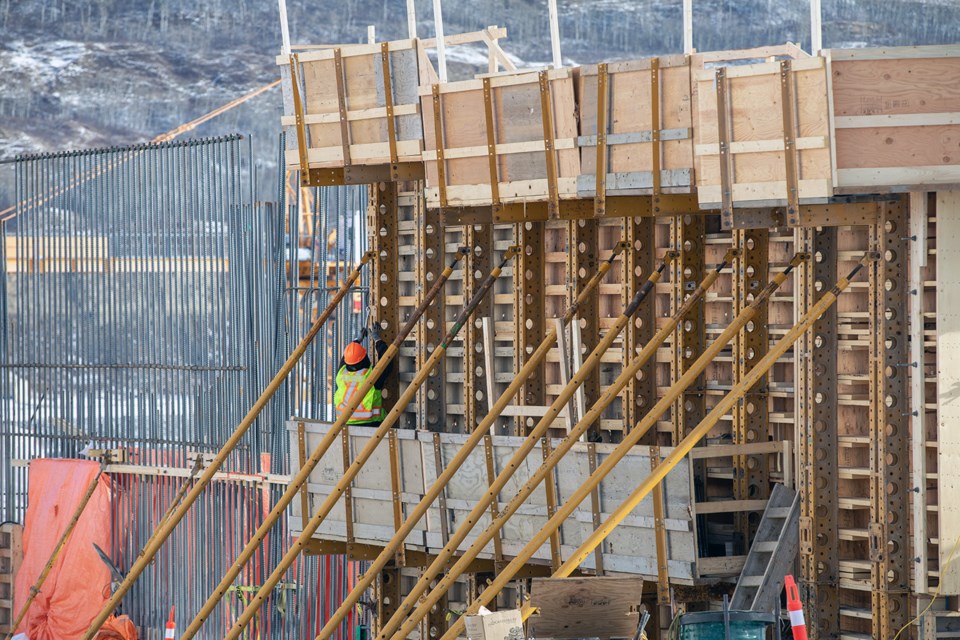 Building the formwork for the Site C spillway pier, March 2021.BC Hydro

Both U.S. president Joe Biden and Canadian Prime Minister Justin Trudeau have said their respective countries need to “build back better,” as hope for a post-pandemic economic rebound appears on the horizon.

But who is going to do all that better building?

Because Canadians are retiring at a rate that exceeds workforce entry rates, a skilled-labour shortage that has been predicted for about a decade has already arrived for B.C.’s construction sector.

“I would say it has gone from a flashing yellow light to a solid red light, in terms of the challenges it is presenting to the construction sector in particular,” said Chris Gardner, president of the Independent Contractors and Business Association (ICBA).

A recent ICBA survey found contractors reporting they have had to turn down jobs, are taking longer to complete projects, paying more overtime and spending more time on training.

BuildForce Canada estimates that 41,000 workers will retire from B.C.’s construction sector this decade. Only 35,100 new entrants are expected to fill those jobs.

“Combining retirement and expansion demands, the construction industry will need to recruit close to 59,650 workers over the coming decade,” BuildForce says in a recent B.C. industry snapshot.

The residential homebuilding sector is already feeling the pinch, which is reflected in the time it takes to complete new projects.

“We’re pretty good at getting those projects started,” Brendon Ogmundson, chief economist for the BC Real Estate Association (BCREA), said of new housing starts in B.C. “We’re really bad at finishing them. Those construction times keep getting longer and longer.”

Major projects like LNG Canada, the Site C dam and the Trans Mountain and Coastal GasLink pipeline projects appear to have secured the workers they need. A lot of planning and training went into ensuring a reliable skilled workforce for those megaprojects.

But with so many workers tied up with those big energy projects, smaller projects in B.C. may find it harder to attract and recruit workers. In addition to B.C.’s four big energy projects, a number of public works projects are breaking ground or starting in earnest this year, including the St. Paul’s Hospital redevelopment and the Broadway SkyTrain expansion.

In the homebuilding sector, there is a shortage of experienced framers, said Larry Clay, president of Clay Construction and incoming first vice-president of the Canadian Home Builders Association.

It’s not that some young people aren’t keen on carpentry. The demand for carpentry programs at the BC Institute of Technology (BCIT) reports a long wait list for its carpentry framing and forming foundation program.

The ICBA survey found all contractors in B.C. reporting shortages of glaziers, insulators and steel fabricators.

“There is a skilled trade shortage right across the board,” said Scott Jacob, president of Jacob Bros. Construction, which builds roads, airports, hotels and highrises and employs 250 to 300 workers. “Big, small, medium – it doesn’t matter. Every company has a skilled labour shortage. Through the aging demographic, we are losing more experienced tradespeople than we’re educating every single year. We’ve all been talking about this for a long time, and what we haven’t done a good enough job of is making it appealing. We haven’t told the really good story about why there are great jobs in the construction industry, and we’re paying the price for that now.”

In addition to the skilled trades shortage, there is also still a dearth of women in construction. The BC Construction Association (BCCA) confirms that only 6% of construction workers are women.

The good news for any young person thinking about working in construction is that the labour shortage has been pushing wages up. The average wage for a construction worker in B.C. is $30 per hour, and, according to the ICBA, some tradespeople can earn as much as $50 per hour.

But because there aren’t enough young Canadians to replace all the Canadians who are now retiring, Jacob thinks Canada will need to revisit its laws governing imported workers.

“I think nationally we have to look at our immigration policy,” Jacob said. “I think it’s time we maybe de-emphasized the need for people to come in with degrees and cash, and instead get some blue-collar tradespeople.”

Nelson Bennett reports on energy, mining, forestry, fisheries, and resources for Business in Vancouver. Email him at nbennett@biv.com