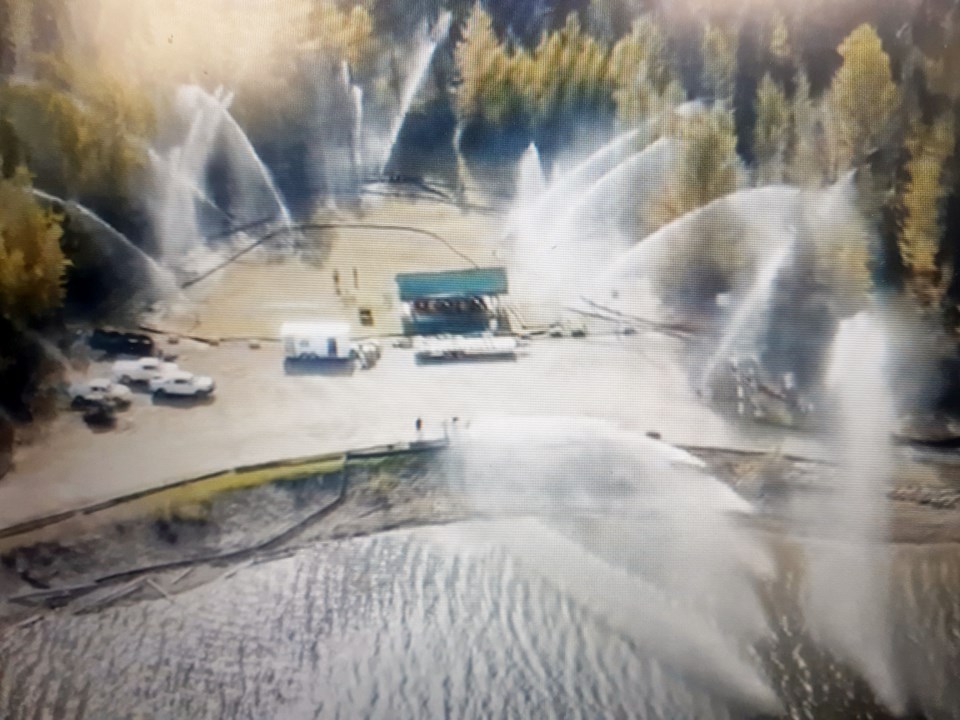 Safeguard, a wildfire fighting company based in Fort St. John, demonstrates how it uses its high-powered pumps and manifolds to create a water curtain to make it rain as a means to protect towns from destruction in wildfires. MLA Mike Morrs says it's time the province declared a state of emergency to get resources like Safeguard involved in fighting the fires in B.C.Safeguard website

With B.C. on pace for one of its worst-ever wildfire seasons, what will it take to convince the B.C. government to declare a state of emergency?

Prince George-Mackenzie MLA and Liberal Critic for Public Safety Mike Morris would certainly like to know. For weeks he’s been calling on the provincial government to enact its emergency powers mandate to free up more resources to fight B.C. wildfires.

BC Public Safety Minister Mike Farnworth has said a province-wide state of emergency won’t be declared until the government is asked to by the BC Wildfire Service, Emergency Management BC and the provincial Fire Commissioner, and as yet he hasn’t received that direction from those government agencies.

“(Premier John) Horgan is saying there’s no advantage to calling a state of emergency other than getting a group of people together and that’s fundamental reason for doing it,” said Morris.

“He says it’s an enthusiastic partisan effort on behalf of the opposition and he takes his advice from the experts within the ministries. He forgets that we were once in that position and we called the state of emergency in 2017. We understand the fundamentals behind that, and why they haven’t done that to now, I’m mystified.”

During the devastating 2017 wildfire season, when the Liberals were in power, the province declared a state of emergency within hours of town of Cache Creek being evacuated under threat of the Elephant Hill fire that ravaged 1,920 square kilometres of the Bonaparte River watershed and burned 120 homes.

The almost total destruction of the southern Interior village of Lytton in a wildfire whipped by strong winds on June 30 resulted in two deaths and is a glaring example of how ill-prepared some of B.C.’s smaller communities are to fight fires.

As a former RCMP officer, Morris knows firsthand what emergency powers provide. He said it eliminates the red-tape bureaucracy which can impede gaining approval for resources needed to act on an emergency.

“If you have a fire boss and he needs an airplane of 100 guys on the ground he goes and gets them,” said Morris. “Otherwise, he’s got to go through the chain of command and get the minister or deputy minister to get those resources for them.

“We’ve heard stories about WorkSafe forbidding people to go to work (on the fires) until they have outhouses in place. That’s B.S. You’ve got to get the job done and it just amazes me they’ve let it go this long without declaring a state of emergency. It alleviates a lot of the pressure on the people doing the job when they can get those resources anywhere, any time they want.”

The 2003 wildfire season was the worst in B.C.’s history, with 2,500 fires that destroyed 334 homes and businesses, much of that caused by the Okanagan Mountain fire in Kelowna. Three pilots were killed fighting the fires that year and 260,000 hectares of forest was burnt. Loss of property and the cost of fighting the fires totalled $700 million.

Resource-based projects ongoing in the province have crews working in rural areas on pipelines, mining projects and forestry operations and that’s led to a shortage of qualified first-aid attendants available to firefighting crews. Morris said a state of emergency would give firefighters the authority to take those first-aid attendants away from their normal duties to join fire-suppression efforts.

Morris is also calling for the province to invest more in its aerial firefighting equipment. He’s seen how effective the Conair Air Tractor AT-802F scooper fixed-wing aircraft are with their amphibious scooping capabilities. The planes have the capability to skim over lakes or rivers to refill their 3,000-litre water tanks within 15 seconds. The province has 1,700 bodies of water large enough to allow scooper aircraft to refill.

“We’ve got 10 of them and they’re in two squadrons of five, so they fly in formation and just come in one after the other and scoop and load and dump it and they just keep making these circuits, and they are the most effective piece of equipment that we have,” said Morris.

“I think we should double or even triple that and have them in the province here. The problem with B.C. is they’re too late on the uptake and a lot of these resources have been contracted out to other parts of the country and other parts of the world.”

BC Wildfire Service is also utilizing land-based air tankers which drop water or fire retardant, and helicopters that carry water buckets. The Canadair CL-215 turboprop air tankers, which have scooping ability, are also involved but there are only four of those in the Abbotsford-based Conair fleet.

No fixed-wing resources have been dedicated this year to fighting fires in the Prince George Fire Centre. The BC Wildfire Service is concentrating its planes on the southern half of the province where there are more interface fires threatening more densely populated areas, homes, businesses and infrastructure.

“They’ve let things get out of hand down south so badly, we’ve got so many properties and communities and ranches being evacuated and in danger right now, so they’ve put all their assets into them and abandoned the rest of the province because they don’t have a state of emergency and they don’t have the resources,” Morris said.

“BC Wildfire (Service) is tapped out. They don’t have one bit more of resources to help out here.”

But there are other firefighting resources are available. Last year, Morris observed a demonstration in Mackenzie by Safeguard, a Fort St. John-based company that specializes in mass water deployment as a means of stopping wildfires. The water curtain capabilities utilize 20 water cannons fed by lakes or rivers which can soak forested areas to put up a water barricade in a line as long as 20 kilometres.

The Safeguard website says the company’s crews have been dispatched three times by the B.C. government to fight fires (Elephant Hill fire in 2017, Shovel Lake and Burns Lake fires in 2018), but not this year.

“They can saturate an area around a community and they have trucks and trailers ready to go on a moment’s notice,” said Morris. “They’ve got millions of dollars worth of pumps and state-of the-art equipment and (210 fire crew personnel).

“They’ve offered help to the province and the province has not accepted their help yet. They can set up around Ashcroft or Canim Lake, anywhere that’s in danger of getting hit by the fires right now and the province is sitting on their hands.”

Indigenous leaders have joined the Liberal opposition in pressuring the provincial government to enact its emergency powers authority.

“People losing their entire life investment in their properties is just unacceptable,” Grand Chief Stewart Phillip, Union of BC Indian Chiefs’ president told Global News. “An entire town has burnt to the ground with loss of life. These fires are increasing with about 26 new fires every couple of days. We’re not even in full fire season, which is August, and these fires continue to intensify.”