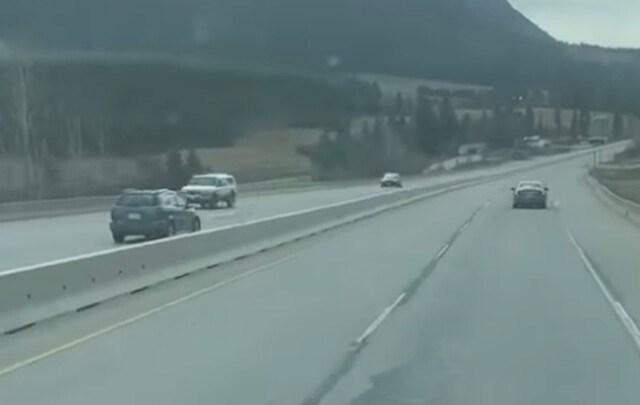 A car is seen driving in the opposite direction.Joshua Farley

It's a miracle no one was injured by a wrong-way driver on the Trans-Canada Highway, Tuesday.

Joshua Farley did what he could to warn oncoming drivers that a car was heading the wrong way down the highway near Salmon Arm.

Farley posted dashcam video of the incident to social media showing a small Ford car in the oncoming lanes, travelling at highway speeds.

"I’m a local garbage hauler coming back to Salmon Arm with a load. I was travelling in the slow lane headed towards Salmon Arm, past Balmoral, and trucks going the other way just started honking and flashing lights. I looked over, and there this lady was just driving all casual in the fast lane, at speed," said Farley.

"Not once did brake lights come on while other cars were passing and no attempts made to get to the side of the road. The lady travelled in the fast lane all the way from Balmoral Road to White Lake Frontage Road at the bottom of the hill.

"I drove with beacons and lights flashing, honking at oncoming traffic to get out of the way, travelling at 90 km/h."

Farley said he contacted police via Bluetooth, and they were searching for the vehicle.

Castanet has reached out to Salmon Arm RCMP for comment about the incident.