Afternoon Tea: Where it came from and how to make it

A few years ago, I had the privilege of attending afternoon tea at The Empress Hotel in Victoria, arguably the most popular tea house in Canada. The amount of work and preparation that goes into this meal is astounding
Jul 9, 2021 10:22 AM By: J.E. Stanway 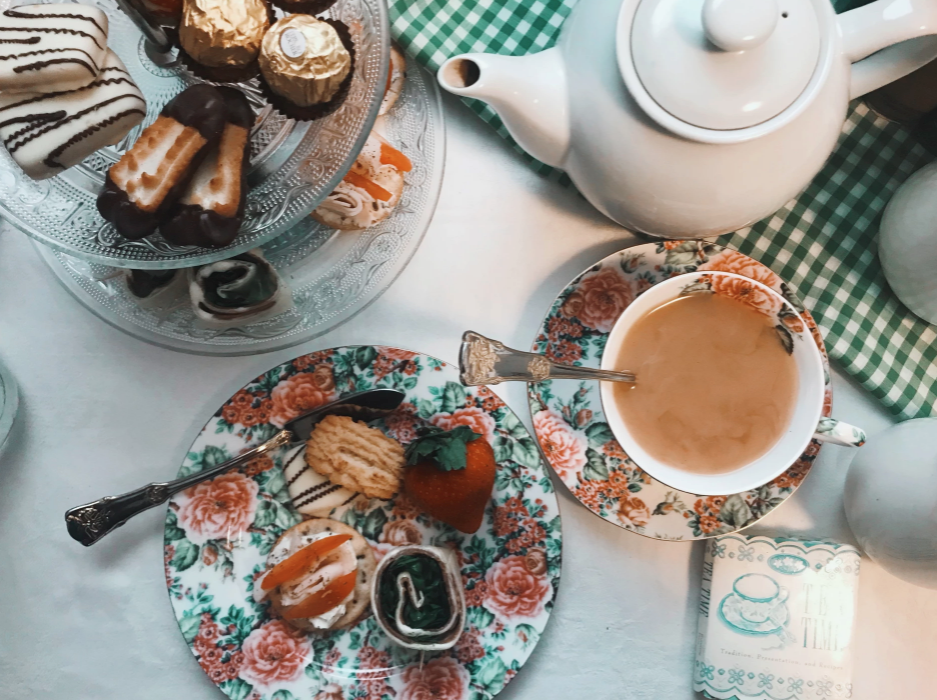 J.E. Stanway: "Perhaps, like myself, you don’t live in an area where a traditional tea service is readily available. And due to COVID restrictions, this may be even more difficult to find. But putting together your own afternoon tea service is not as difficult (or as expensive) as you might think."J.E. Stanway

Afternoon tea - a tradition that has been around for over 180 years and thoroughly enjoyed by all the generations that have passed through that time. In the last few years, the tradition has received a spike in popularity, no doubt because of period dramas dominating a large part of modern media. Personally, ever since I watched Downton Abbey for the first time, I’ve gained a new appreciation for tea time as an art form and try to integrate elements of it into my daily tea break. The background of this tradition is both funny and interesting, and, now that I know more about it, I’ve gained an even deeper appreciation for the custom.

Afternoon tea was popularized by Anna, The Seventh Duchess of Bedford, in 1840. During those years, the fashionable time to eat dinner wasn’t until 8 p.m., meaning most aristocratic households went for up to eight hours in between meals. Anna hated this custom, as she found that by mid-afternoon, she would have terrible hunger pains. She eventually resolved to disregard fashion and had her servants bring tea, bread and butter, and cake to her private rooms around four in the afternoon. She soon developed this routine into her daily life and eventually began inviting friends to join in on the delicious fun! Queen Victoria, a life-long friend to Anna, loved this idea and decided to integrate it into palace life. With the upper classes loving this new idea, this practice was soon adopted into English society and, from that point forward, slowly began to merge into a defining English tradition.

What makes it so special

If you have ever been served a traditional English tea service, you know how intoxicating it is and how it really feels like an event. A few years ago, I had the privilege of attending afternoon tea at The Empress Hotel in Victoria, arguably the most popular tea house in Canada. The amount of work and preparation that goes into this meal is astounding. A selection of sweets, savouries, breads, and jams all have to be prepared fresh and with only the best ingredients. The tea selection must be loose-leaf, in order to retain the full bouquet of flavour, the dinnerware must be high quality, preferably bone china. Your dress and grooming must be at minimum semi-casual (though tradition would insist you dress formally), meaning no open-toed shoes or hoodies at the table, and, lastly, your decorum and poise should be reflective of all that is ladylike and demure.

As you can easily guess, paying for an afternoon tea service is not cheap. It cost about $75 per person when I attended (due to COVID, the tea room is temporarily closed), but it was well worth the price of admission. I can still remember the full flavour of the Earl Grey, the rich and cloud-like texture of the clotted cream, and the feeling of being drawn into another era. There is true grace and sophistication about this tradition that is very difficult to express. It’s almost as if you are, for a brief moment, being given a glimpse of another life, being shown a world that may be gone, but remnants of it still remain.

How to Put on Your Own Tea Service 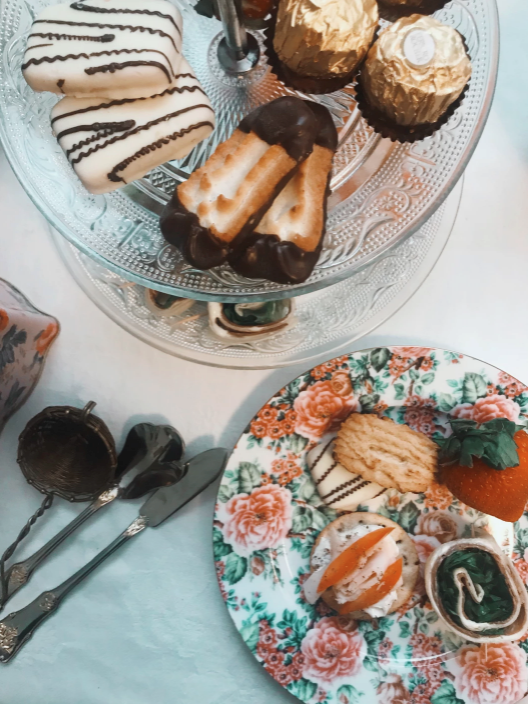 Perhaps, like myself, you don’t live in an area where a traditional tea service is readily available. And due to COVID restrictions, this may be even more difficult to find. But putting together your own afternoon tea service is not as difficult (or as expensive) as you might think.

Start with the china. If you already own a tea set, you’re a step ahead. Websites like Amazon have fantastic deals on tea sets that are very lovely and cost under $100 if you don’t own one already. In proper traditional style, you must acquire:

Prepare the food. Tradition states that clotted cream, biscuits, Victoria Sponge, and egg mayonnaise sandwiches are staples during afternoon tea. Cake is also a welcome guest. If you’re trying to be economic, stick to recipes that require less expensive ingredients (butter and cream, for example, add up quickly). Cucumber sandwiches, baking powder biscuits, white cake with jam, or a box of inexpensive chocolates are all fantastic options for a filling tea.

Properly steep the tea. When preparing the tea itself, there are rules of thumb one simply must follow in order to do things properly. Below are the steps you must take in order to tea successfully:

Warm the teapot. While the kettle is boiling, fill up your teapot with hot water, and leave the lid closed. Place a warmer over the teapot to prevent the pot from cooling off. This practice will keep your tea fresh longer.

Stick to looseleaf. In order to gain the full taste and aroma of your selected blend, toss away the teabags. For a two-cup pot, 2-3 scoops of tea leaves are generally acceptable. This will vary depending on the strength of the tea. Blends such as Earl Grey, Darjeeling, and Assam are traditionally served.

Tea first, milk second. When making a cuppa, milk is often put first. For a pot, however, since the tea is already brewed, the milk always goes last. Anything else is sacrilege. 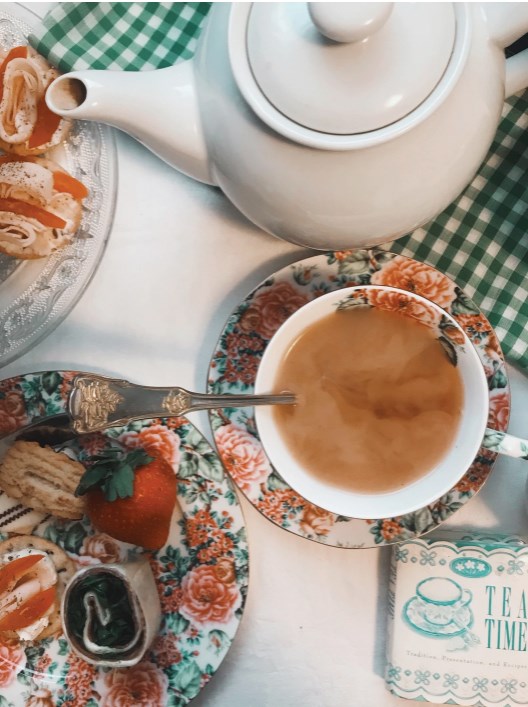 Be creative with your layout. Afternoon tea is all about extravagance! Therefore, take advantage of this occasion to pull out your best table linens, fill vases of flowers, throw in some vintage ornaments - deck out your table in as much finery as you can get your hands on. Pinterest has some fantastic design ideas, and photographed here is my own table design.

Dress and act the part. When taking tea, it’s always important to look your best. Now that it’s spring, a sundress or a dainty skirt is the perfect thing to throw on, and be creative! If you want to dress like an Edwardian lady in your own house for a day, who’s going to stop you? And mind that you don’t raise your pinky - regardless of popular belief, this action is a slight and regarded by many (including the aristocracy) as rude and elitist.

Make it social. Despite COVID-19 restrictions on gatherings in many areas, you can still make afternoon tea a social event! Get your friends to set up their own tea services, and enjoy each other’s company over Zoom or Facetime. And if you live in an area where small gatherings are permitted, even better! Spring is the ideal time to indulge in friendship and finery, and nothing accomplishes that better than afternoon tea.

J.E. Stanway lives and writes in Fort St. John, and is the Editor of The Postmodern Journal. Read more works by visiting thepostmodernjournal.com.