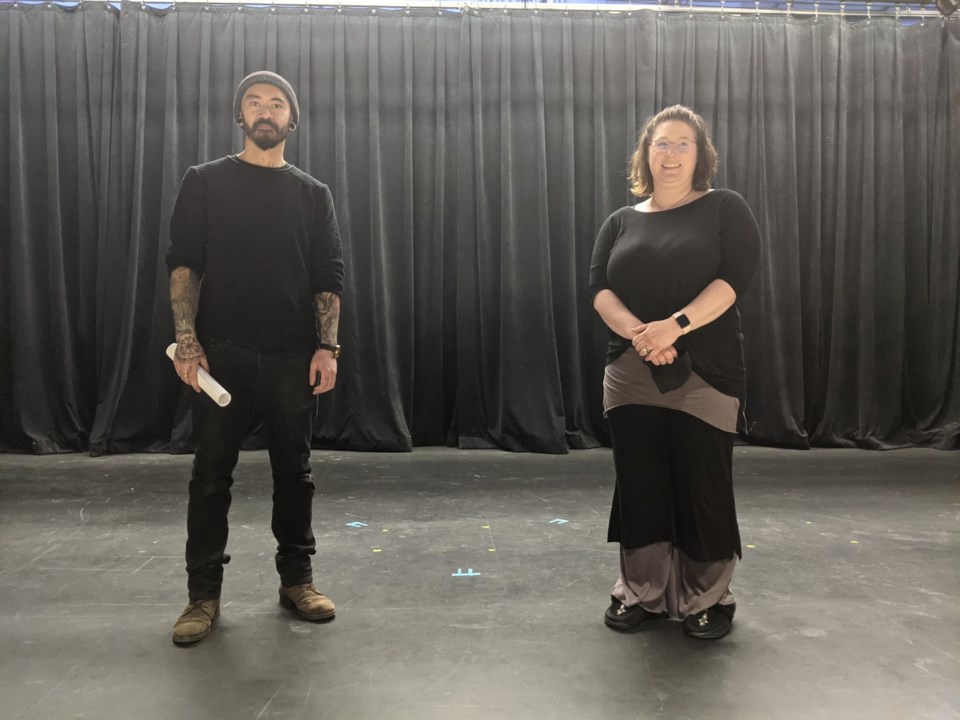 KPAC theatre coordinator Kurtis Nguyen and executive director Johanna Martens are excited to bring back the Peace River South Festival of the Arts this April, after missing 2020’s event. Giancola

After the 2020 edition of the Peace River South Festival of the Arts was cancelled for the first time in event history, the organizers of the festival and people at the Kiwanis Performing Arts Centre promised they would never let that happen again.

They have lived up to that performance.

“The hardest part about cancelling the event last year was seeing how devastating it was to our students. We said we would never let our festival go by the wayside again, and it’s been a really hard battle because most people across the province didn’t know what to do, but we persevered and found a solution,” said KPAC executive director Johanna Martens. Registration is now being accepted for the festival, which will be 100% virtual this year.

From now until April 8, parents and performers can go to prsfa.net to register, to find out what is required in terms of recording their performance, and to submit that performance. Judging will take place from April 8 to 16, with performers receiving both a written and oral review. However, this is different than the virtual events many organizations and non-profits have had to resort to. More than just a socially-distanced, do-it-at-home version of a festival, the very popular honours concert will stake place, with professional filming and recording of the selected acts being done at the KPAC theatre, and edited together for a free livestream (with options to donate) presented online on May 14. More impressive is the fact that out of the 36 regional music festivals that take place in B.C. each year, only eight are continuing in some shape and form for 2021, and only six are still having their honours concert, of which the Peace River South is one.

“When it came to doing the festival this year, (KPAC theatre manager Kurtis Nguyen) was instrumental in launching what it would become. We participated in a provincial meeting with other organizers to see what they were doing, and we realized nobody had any answers. Kurtis stepped up and gave us some guidance on how to best operate,” Martens said.

“The festival is a big deal for kids, it’s a chance to get scholarships or to help them move to the next level, or a chance to play in front of your friends and family and show what you’ve been working so hard on,” said Nguyen.

“We (at the KPAC) had already gotten used to recording performances and doing things virtually, and now we have a whole new website in place to put on this kind of event that we’ll be able to keep doing this in the future no matter what, because virtual is the way things are going.”

The festival would typically attract more than 300 acts, and even more performers, as some dance and musical categories consist of groups. Neither Martens nor Nguyen know what to expect, but are happy with the 100 individual performers and 30 groups that signed up in the first five days, and feel good about the way things are going.

“The reception has been pretty positive so far, we’re doing well and will move forward with this site going forward. We’ve heard from a lot of kids who are very excited there will be a festival this year,” said Martens.

One added bonus of this year’s festival is it will allow adjudicators to participate without travelling to Dawson Creek, and some performers who may live a bit further away to send in recordings. Although not everyone will be able to play in front of their invited audience this year, those in the honours concert will be able to have many more people watch than would have ever been able to before.

“The honour concert is important, it’s more of a showcase than a judged performance, and this will open us up to possibly a worldwide audience, family overseas or in Ontario will get to watch and that’s pretty neat,” said Ngyuen.