Anyone in the Peace Region with a love for arts, culture, and heritage has certainly heard of Sue Popesku or of her legacy. Now, a website preserving the many years she dedicated to building and enriching local communities is online.
Jul 8, 2021 4:16 PM By: Matt Preprost 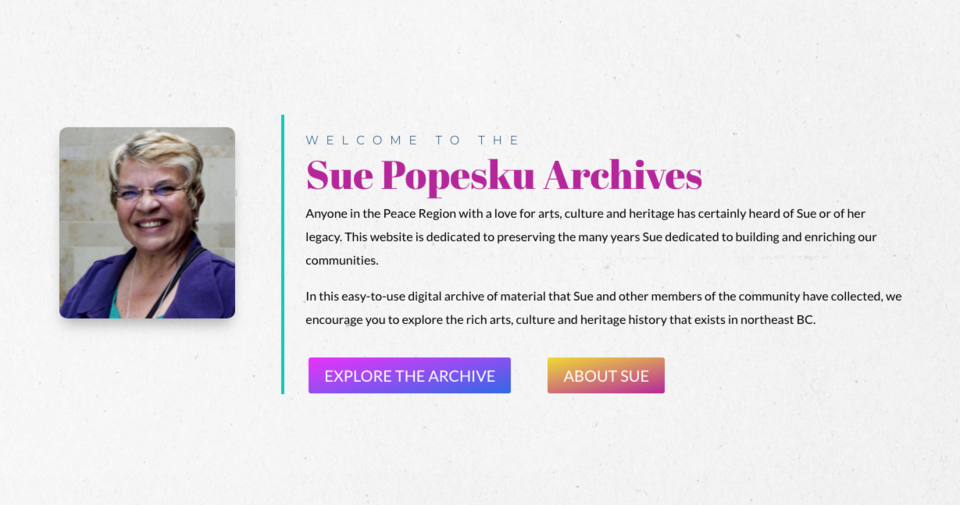 Anyone in the Peace Region with a love for arts, culture, and heritage has certainly heard of Sue Popesku or of her legacy. Now, a website preserving the many years she dedicated to building and enriching local communities is online.

The Sue Popesku Archives have officially launched at suepopeskuarchives.ca, and feature the rich arts, culture and heritage history of northeast B.C.

The website is being developed by the Peace Liard Regional Arts Council in partnership with the Fort St. John North Peace Museum. The Arts Council says the website is still under construction and that new features and content will be available as its development continues.

Summer students are busy uploading the arts, culture, and heritage archives from Popesku's many boxes of materials collected over many decades going back to the 1970s and 1980s. Popesku was known for compiling volumes of history books filled with event programs, newspaper clippings, photographs and more for local community groups, and students have 50 boxes of material to sort through.

“She never threw anything out. She kept every scrap of paper related to any arts, culture, or heritage event,” said Executive Director Donna Kane about the development of the archives earlier this year.

Originally from Chicago, Popesku met her husband Sorin in the early 1970s in Australia. They were both teachers, and moved to Fort St. John in 1974. It was here where Popesku quickly became one of the city’s most tireless volunteers, fundraisers, and builders.

Indeed today, much of her legacy and dedication can be seen across the city: the Cultural Centre, the Museum, the Hospital Foundation, the Artspost, the street banners, the flower pots. If you can name it, Popesku was likely to have her hand in it, whether that was leading the charge herself, or mentoring anyone with a creative idea to entertain or make the city better.

Popesku was a dependable force behind the scenes, and brought in millions in grants and community dollars to support the development of the growing city, whether it was for the hospital foundation or an arts group, or making sure the Cultural Centre was built and opened in 1992.