T abias is nine years old. But his alter ego, Cap’n Imagination, is infinity years old. He has speed that surpasses the Flash, intelligence superseding Dr.
Jun 1, 2019 9:00 AM By: Norma Rrae 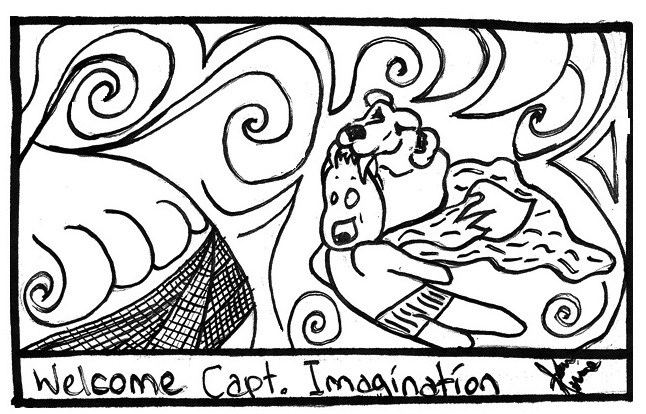 Tabias is nine years old. But his alter ego, Cap’n Imagination, is infinity years old. He has speed that surpasses the Flash, intelligence superseding Dr. Strange, and he's sharper looking than Iron Man; he's the superhero everyone looks to the sky for. Except for Sister; she reminds him his size hardly scales Ant Man.

The camouflage from his mask, a decapitated teddy bear head, is so concealing that it doesn’t even need to cover his face. It only proved his powers were mightier than the mighty Thor, stealthier than the surreptitious Black Panther, and classier than the sumptuous Batman.

The steel cut muscles on his chest shred T-shirts to confetti; his shorts are made extra stretchy for when he turns Hulk-like; and his boxer briefs are made by the Incredibles’ tailor to ensure that if he goes flames on, his butt wouldn’t show.

His Achilles heel is the fox tail pinned to his shorts. It tells Step Mother (courtesy of a black snail trail through the kitchen) when the dirt monster (a mud puddle from the garden and hose) has won a battle and it’s time for a bath (kryptonite.)

“No wet superheroes in my house,” Step mother said, dragging him to the tub.

“I’m Aquaman!” Tabias retorted as he fought against her super villain power.

“OK, Aquaman,” she said with a chuckle. “Then I guess you’ll enjoy the bath.” She threw him in and closed the door.

“But the Kraken will get me!” Tabias wailed, trying to climb out. Naked and slippery, he fell back in.

Step Mother laughed from the other side of the door. “I thought you were Aquaman?”

Tabias pushed himself back and forth in the tub until the water splashed onto the floor; faster until the waves grew so large that he had to plug his nose and dive under.The water became cold in those depths of the bathtub, but Tabias kept his eye on the prize. A shiny pirate treasure at the bottom?

He swam closer, wrapped his fingers around the silver, and pulled with all his strength. It was the bath plug! Suddenly, the water spun into a tornado and sucked Tabias through the open drain.

An angry roar warned he had arrived in enemy waters. The Kraken appeared.

He was infuriated with Tabias and his presence. Strong tentacles wrapped around Tabias and crushed him. If Tabias had his fox tail, he could’ve tickled the monster to let go, but evil villain Step mother had co-conspired! Then, an idea.

“Temerarious!” Tabias shouted through the gurgle of water, and jammed the silver bath plug into the Kraken’s mouth.

The monster bulged, like a balloon near bursting, and released Tabias. The Kraken floated upward in the dark water, forcing Tabias back up and out of the drain.

“Tabias!” shouted Step mother. “Where in the wild is the bath plug?"

Norma Rrae is an author based in Fort St. John. Read more of her works at notmewriting.com.