Is there anything more Canadian than a moose? The majestic beasts are usually spotted along the highway, occasionally in someone’s yard, and now at Peace Gallery North.
Feb 8, 2017 9:47 AM By: Aleisha Hendry 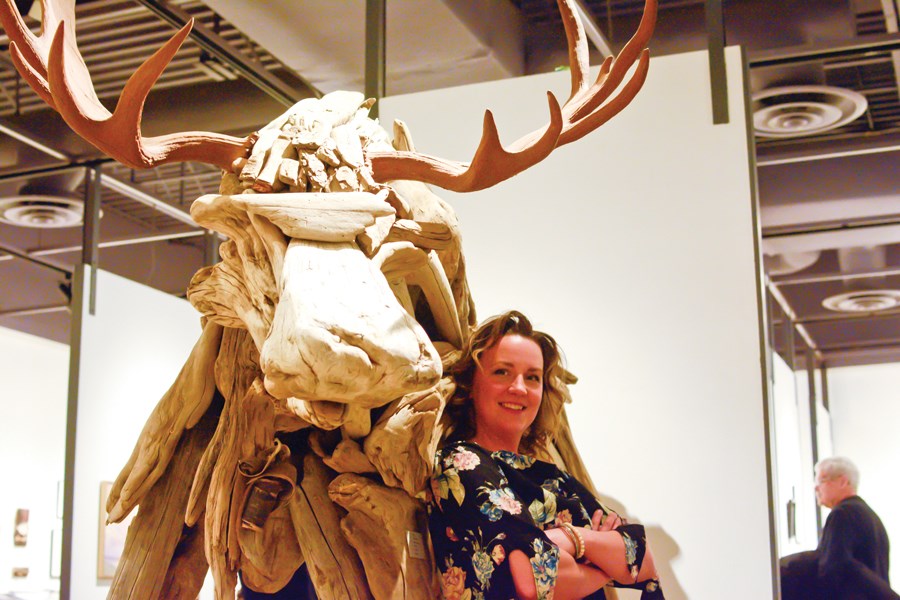 Local artist Michelle Pringle stands with her driftwood moose sculpture at the opening of My Canada, the first exhibition on the year at Peace Gallery North, on Feb. 3. - Aleisha Hendry Photo

Is there anything more Canadian than a moose?

The majestic beasts are usually spotted along the highway, occasionally in someone’s yard, and now at Peace Gallery North.

A full-sized moose made from driftwood was the showcase piece at the opening of My Canada, an exhibition of local artists with pieces representing what Canada means to them.

Local sculptor Michelle Pringle created the piece, entitled Sturgill, after country singer Sturgill Simpson, whom she listened to while she was making it.

“I don’t know if you can get anymore Canadian than a full-sized moose,” she said. “Why is the Canadian animal a beaver? It should be a moose.”

Pringle creates all sorts of animals and other items from driftwood collected from Williston Lake, making her work about as local as it gets.

“Better pickings than on Vancouver Island,” she said.

“You go to Williston and there’s driftwood as far as the eye can see.”

Sturgill came together for Pringle in a way that made her think he was just meant to be.

“He came together so easily, I put him together and would say ‘I need something here’ and look at my pile and think ‘OK, this piece,’ and it would just wedge in like a puzzle piece,” she said.

There were plenty of other animals on display at the My Canada opening, from bison to bumblebees, horses to bears.

Alison Newth also created a moose, but in acrylics on a black-toned canvas.

“To me, Canada is landscapes and wildlife,” she said. “Normally I paint them separately, but I decided to paint them together this time, best of both worlds.”

Her painting titled Into The Wild uses bright colours rather than the browns and greens seen in nature. Newth says it’s meant to represent the light at sunset, which can change how colours are seen.

Eliza Stanford chose a different approach with her piece. Her painting Emerging Spring represents springtime in the North.

While spring is often considered a beautiful season most places, in the Peace Region, it’s rather dull and dead looking, said Stanford.

“The snow is gone, but there’s remnants of what the snow has done: it’s pushed the grass down and it’s lying in some beautiful patterns on the ground, and there are hints of colour, like the red and yellow, showing us that it’s almost going to happen, and then eventually it explodes into summer,” she said.

The exhibition showcases just how much artistic talent there is in the Peace Region, the true north, strong and free.

My Canada runs until Feb. 25 at Peace Gallery North.