Enbridge officials were in Fort St. John and Taylor over the past week to give councillors an update on the company's regional projects. Enbridge sold its Alberta and B.C. gathering and processing assets to Brookfield Infrastructure in a $4.
Nov 26, 2019 11:59 AM By: Alaska Highway News Staff 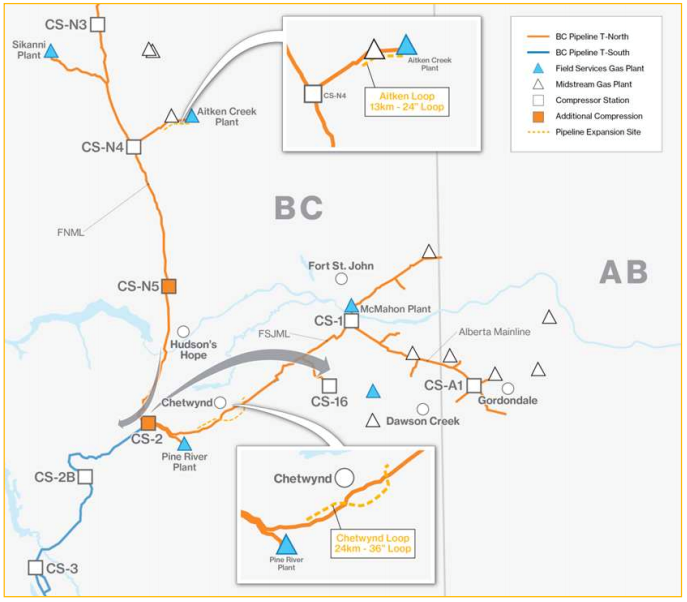 Enbridge officials were in Fort St. John and Taylor over the past week to give councillors an update on the company's regional projects.

Enbridge sold its Alberta and B.C. gathering and processing assets to Brookfield Infrastructure in a $4.3-billion deal announced in 2018. The second phase of the deal, which includes the McMahon gas plant in Taylor, is expected to close by the end of the year.

"Even though there’s been lots of changes… I’m here to say we’re still committed to the communities," Michaela Bjorseth, engagement manager for Enbridge, told Taylor councillors on Nov. 18.

Here's an overview of Enbridge projects in the queue and what the company is looking to do about caribou:

The project has received approval from the National Energy Board, now called the Canada Energy Regulator, as well as permitting approvals from the BC Oil and Gas Commission.

The project is estimated at $565 million. Click here to read more.

This project includes upgrades to Compressor Station 1 to be able to operate independently from the McMahon plant, now operated by NorthRiver Midstream.

Enbridge plans to submit a project application to the Canada Energy Regulator in December.

Pending approval, construction could begin in the winter or spring of 2020, with an in-service date targeted for 2021.

This project will add capacity on the T-South system, which runs from south of Taylor to the U.S. border, Bjorseth said.

Work includes installation of new compressor units and gas coolers at five existing compressor stations, and upgrades to compressors at two other stations and one meter station. The most northern work will take place near Azouzetta Lake.

This project is still at a high level, Bjorseth said, and the company is exploring opportunities to separate natural gas liquids from its transmission gas.

A straddle plant is being considered west of Chetwynd that would extract the liquids and ship them via a new pipeline to a fractionator and rail facility. Enbridge is still refining the scope of the project with its customers, Bjorseth said.

A project description has been submitted to environmental assessors. Pending the regulatory process and approvals, construction could begin as soon as 2022, with an in-service date in 2024.

The project is estimated at $2.5 billion. Click here to read more.

Enbridge must offset caribou habitat losses as part of approval conditions for four recent projects, and is currently looking at locations to carry out that work, Bjorseth said.

"We are going to be offsetting up to potentially 400 to 600 hectares of caribou habitat, so it's quite a large footprint," Bjorseth told Fort St. John council on Nov. 25.

"We're really interested in working with local governments, local communities, indigenous communities, on where those should be. This could be replanting, it could be access controls."

Enbridge has inspected its entire transmission system with the latest state-of-the-art tools after an explosion north of Prince George in October 2018. The tool has double the number of sensors and is "more accurate at assessing a potential problem such as stress corrosion cracking," Bjorseth said.

Enbridge will be increasing the frequency of inspections with the tool, and has also nearly doubled the amount of integrity digs across its system, Bjorseth said.

"This is where we go in, excavate around the pipeline and physically inspect it, and take any necessary repairs," Bjorseth said.