Enbridge Inc. has more than doubled its investment in Westcoast’s T-North and T-South over the last several years and expects expansions to continue for years to come, a senior company official said Tuesday.
Dec 11, 2019 9:50 AM By: Elsie Ross 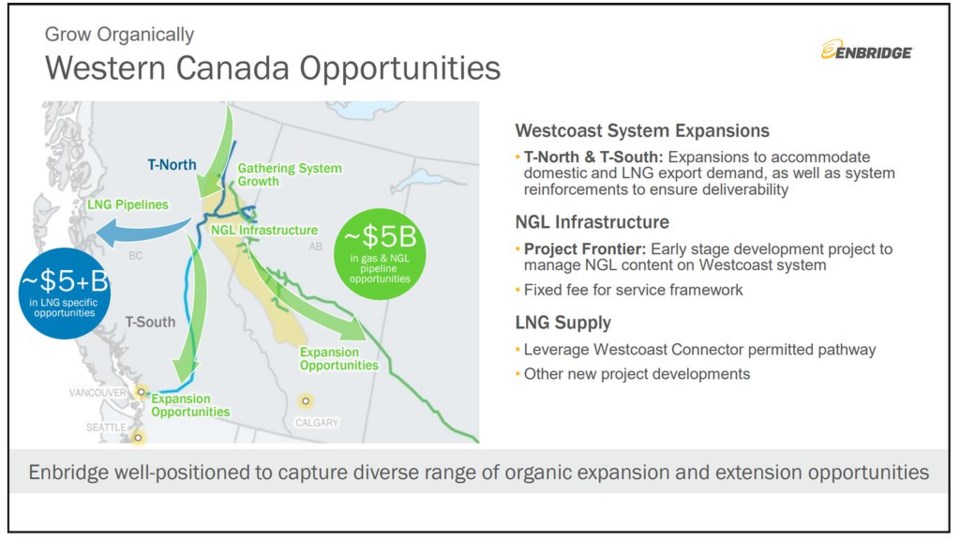 Enbridge Inc. has more than doubled its investment in Westcoast’s T-North and T-South over the last several years and expects expansions to continue for years to come, a senior company official said Tuesday.

The project is expected to come into service in 2021, about the same time as its $500 million Spruce Ridge project in T-North which provides needed access for Montney producers trying to reach export markets, said Yardley.

“This is a great investment on T-South to serve both growing demand of domestic needs in Vancouver and the Pacific Northwest but also an LNG export market, all under a cost-of-service framework,” he said.

Another area of focus is the Westcoast Gas Transmission Connector pipeline which has been on the books for some time, analysts heard. “It’s got a nicely-developed route to Prince Rupert, it’s scalable and cost-effective,” he said. “Any of the next phase LNG projects that have Prince Rupert in their sights are talking to us with regard to the West Coast Connector.”

Enbridge also is exploring the development of natural gas liquids infrastructure in Canada so that its customers can fully monetize the liquids that currently are entrained in the gas stream and don’t have an outlet, said Yardley.

It has filed a project description with the B.C. Environmental Assessment Office for Project Frontier which would involve building an NGL extraction facility, a pipeline and associated facilities in northeastern British Columbia, possibly as early as 2024.

Read the full story at the Daily Oil Bulletin by clicking here.