For Canadian resources, there would be pros and cons to Biden-Harris White House, say observers

First, Barack Obama killed it. Then Donald Trump resurrected it. Now, Joe Biden, who is favoured in polls to win the next U.S. election, is taking a kick at a perennial Canadian football: the Keystone XL pipeline project.
Aug 19, 2020 9:33 AM By: Nelson Bennett 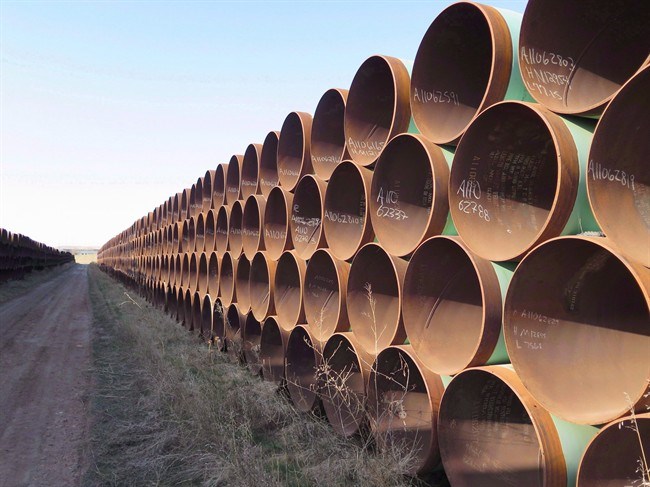 A yard in Gascoyne, N.D., which has hundreds of kilometres of pipes stacked inside it that are supposed to go into the Keystone XL pipeline, are shown on Wednesday, April 22, 2015. THE CANADIAN PRESS/Alex Panetta

First, Barack Obama killed it. Then Donald Trump resurrected it.

Now, Joe Biden, who is favoured in polls to win the next U.S. election, is taking a kick at a perennial Canadian football: the Keystone XL pipeline project.

At the invitation of Trump, Canada’s TC Energy resurrected the $10 billion project – a 1,900-kilometre 830,000-barrel-per-day pipeline running from Hardisty, Alberta, to Nebraska via Montana and South Dakota.

Now, there is a possibility the project could be halted again by presidential fiat.

If Biden were to make good on the pledge to rescind its permit, it would be another blow to Alberta – which is backing the project with a $1 billion equity and $6 billion loan guarantee from the provincial government – and, possibly, to Canada-U.S. relations.

University of Calgary economist Jack Mintz said Biden will come under pressure from unions to walk back his pledge.

“Biden’s a union guy, and he’s going to be going against the unions that are quite supportive of finishing the pipeline, because it’s their jobs,” Mintz said.

Alberta can also count on the American Petroleum Institute (API) going to bat for Keystone XL. Frank Macchiarola, API’s senior vice-president of policy, economics and regulatory affairs, said it has lobbied hard in favour of Keystone XL because of its role in supplying U.S. refiners heavy oil.

If Biden cancels the project, Mintz expects TC Energy would sue for damages and that Canadians would demand a strong response from the Justin Trudeau government.

“In the case of Alberta, it will be a huge loss. This is the most efficient and best way of getting oil down to the Gulf Coast.”

It’s not the only way, however. Alberta producers would still be able to move heavy oil to refiners on the Gulf Coast by rail and via tanker through Vancouver and the Panama Canal, once the Trans Mountain pipeline expansion is complete.

“It costs a few bucks more by tanker per barrel, but it’s feasible,” Mintz said.

Biden has vowed to stop issuing new leases on federal land for oil and gas extraction and increase stringency for methane emissions standards – something that could benefit natural gas producers in Western Canada, because it might mean less natural gas production in the U.S. and higher prices.

“That could stand to benefit Canadian producers,” said Karen Graham, a public policy consultant and principal at KMG Strategy specializing in energy, environment and cross-border issues.

On the other side of the energy coin, Biden’s US$2 trillion “clean energy future” plan could be good for some Canadian industries, provided his policies don’t exclude Canadian products like lumber, hydrogen fuel cells, steel and aluminum.

The plans call for heavy investment in infrastructure, including railways and high-speed trains, nuclear power, carbon capture, renewables, energy efficient buildings and building retrofits – all of which would produce a surging demand for many of the things Canada produces.

Biden has promised to immediately sign back onto the Paris Agreement. Notably absent from Biden’s plan, however, is carbon pricing, which many economists say is one of the most important climate action tools.

Even if the U.S. never adopts carbon pricing, that doesn’t mean Canada will be at a disadvantage, Jaccard said, because energy intensive trade exposed (EITE) mechanisms are used to shield Canadian industries that pay carbon taxes against competitors that don’t.

Isabelle Turcotte, federal policy director for the Pembina Institute, thinks Biden will move on some form of federal carbon pricing, but only after the election. Talking about carbon taxes during a campaign, after all, is a good way to lose an election, especially in the U.S.

And she thinks bringing the U.S. back into the Paris Agreement fold and implementing strong climate policies is ultimately good for Canada.

For one thing, Biden’s plan would align the two countries on things like fuel efficiency standards for light-duty vehicles, as well as low-carbon fuel standards.

“We’re about to go into some pretty substantial conversations as a country here with the consultation on how Canada should design its pathways to get to net neutrality by 2050,” Turcotte said. “There’s a whole question of our carbon budgets that could also be energized by how the U.S. also carries out a similar conversation under a Biden administration.”

As for whether Canadian energy and resources companies will be better or worse off with Joe Biden in the White House, Graham points out that merchandise exports from B.C. to the U.S. (about 20% of which is energy) fell by about 25% since Trump took office – from about $2 billion in 2017 to $1.5 billion.