What exists now? The current Trans Mountain pipeline was built in 1953 and moves about 300,000 barrels a day of crude and refined petroleum products from Strathcona County near Edmonton to Burnaby.
Apr 28, 2018 12:39 PM By: Lindsay Kines 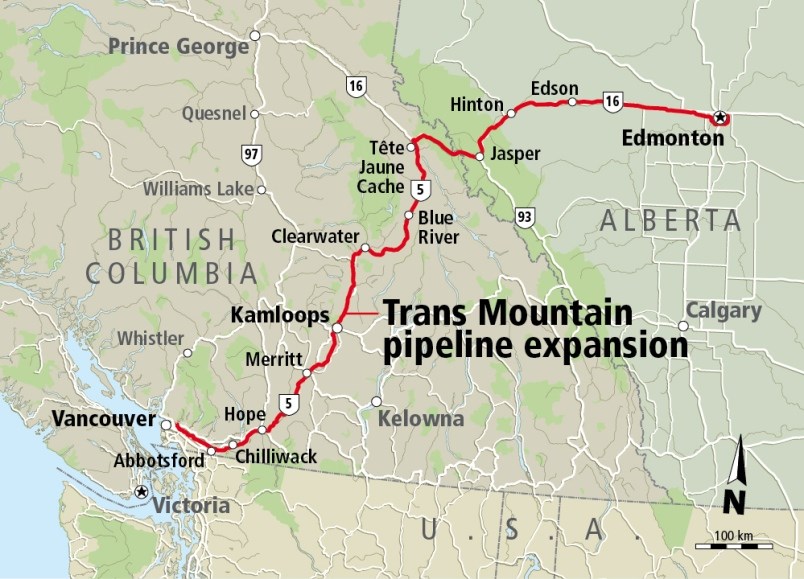 The current Trans Mountain pipeline was built in 1953 and moves about 300,000 barrels a day of crude and refined petroleum products from Strathcona County near Edmonton to Burnaby.

How big is it?

The pipeline is 1,150 kilometres long.

What does it carry?

Various crude oils make up 85 per cent of what flows to British Columbia. Refined products — gasoline, diesel, jet fuel — account for 15 per cent.

Where does it go?

Four per cent, all of it made up of refined products, is unloaded in Kamloops. Fifty-four per cent, all of it crude oil, goes to Washington state refineries via a line from Sumas. Thirty-three per cent — refined products, crude for the Parkland refinery, crude for the nearby Westridge terminal — goes to Burnaby. Nine per cent, including crude for shipping and jet fuel for Vancouver International Airport, goes to the Westridge terminal.

Who owns the pipeline?

The Canadian division of Kinder Morgan, a company with headquarters in Houston, Texas, owns and operates the pipeline.

What do they want to build?

Kinder Morgan applied to the National Energy Board in December 2013 to twin the existing line and thereby triple capacity to 890,000 barrels a day of crude oil and refined products. The Canadian government approved the project on Nov. 29, 2016.

What products will the lines carry in the future?

The existing line will carry refined products, synthetic crude oils, light crude oils and will have the capability to move heavy crude oils.

The new line will carry heavier oils and have the ability to transport light crude oils as well.

How much will it cost?

The cost of the expansion project is pegged at $7.4 billion. The project will add approximately 980 kilometres of new pipeline underground and reactivate 193 kilometres of existing pipeline. The project will add 12 pump stations, 19 tanks at storage terminals and three new berths at Westridge Marine Terminal in Burnaby. Once the berths are built, the number of oil tankers loaded at the terminal is expected to increase almost seven-fold, to 34 a month from five.

Sources: Trans Mountain Pipeline Project and the National Energy Board