One year ago, the partners behind LNG Canada formally sanctioned the $40 billion project.
Nov 13, 2019 8:54 AM By: Nelson Bennett 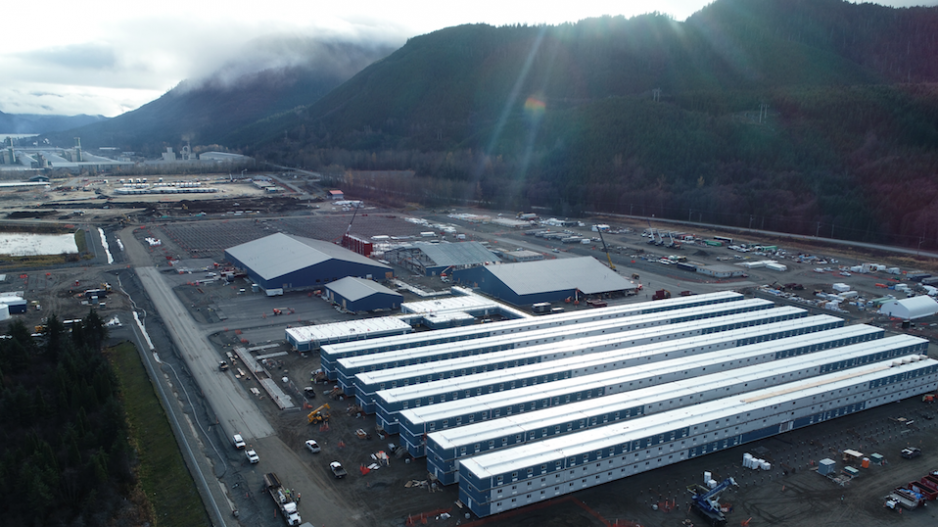 Being built to house workers for the LNG Canada project, the town-sized Cedar Valley Lodge will have 4,500 rooms and will feature an entertainment and recreation complex with a movie theatre. Submitted Photo

One year ago, the partners behind LNG Canada formally sanctioned the $40 billion project.

Today, roughly 1,000 workers are on site in Kitimat – about half of them from the Kitimat-Terrace area – and that’s just to set the stage for the main construction phase, which isn’t expected to start for another couple of years.

Last week, Business in Vancouver toured the project in Kitimat, which is booming, according to Kitimat Mayor Phil Germuth.

Located at the mouth of Douglas Channel, next to the recently upgraded Rio Tinto (NYSE:RIO) aluminum smelter – the scale of which is impressive in its own right – the LNG Canada site at 400 hectares is about the size of 550 soccer fields.

At the north end, the Cedar Valley Lodge, a self-contained work village that will house up to 4,500 workers, is starting to take shape, while at the south end, dredging barges are busy scooping up sediment – some of it contaminated from historical industrial activities – to deepen the channel for liquefied natural gas (LNG) carriers. The dredging alone currently employs about 150 workers.

In between these two bookends is the main site, where a battalion of more than 70 pieces of earthworks machinery – dump trucks, graders, excavators – has already moved about one-third of the 2.8 million cubic metres of fill needed to prepare the site.

If you ground up the Great Pyramid of Giza, it wouldn’t quite provide all the fill that’s needed.

On site are 6,000 40-metre steel pilings, made in Turkey. They will be driven into the ground to support the LNG complex, which will include two LNG processing modules, known as trains.

In July 2021, LNG modules that will be built in Asia are expected to arrive. That is when most of the tradespeople – electricians, welders, pipefitters – will be mobilized to start putting it all together. Peak construction will be between 2022 and 2024.

“That’s when the skyline of the project changes every day, virtually,” said LNG Canada general manager Vince Kenny, who spent the last five years on an LNG project in Australia. “It’s quite an intense couple of years.”

From 2022 to 2024, up to 7,500 people will be employed on the project. The shifts will be staggered, with employees working two weeks on and one week off, so no more than 4,500 will be on site at any one time. Another 2,500 will be working on the associated $6.2 billion Coastal GasLink project.

The project is so massive that a work camp in Kitimat, the 1,186-room Sitka Lodge, is being used to house some of the workers who are building a bigger work camp.

Cedar Valley Lodge is more like a temporary town than a work camp. The work village, being built by Bird-ATCO Joint Venture, will have maximum occupancy of 4,500 rooms, an entertainment and recreation complex that will feature a movie theatre – something the town of Kitimat doesn’t even have – separate gyms for men and women and a basketball court. The first 1,500 beds will open in April 2020.

The idea behind Cedar Valley Lodge is to avoid having workers moving into Kitimat or Terrace and pushing rents up, which often occurs on large projects when contractors provide living-out allowances.

“From the very beginning, we made a commitment not to support living-out allowances,” said Susannah Pierce, director of external relations for LNG Canada. “We don’t want people to be displaced, which is why we went on a very rigorous process to ensure that we developed housing to support our workers, and developed a camp which, as you saw today, would make people want to stay and come back to.”

Some of the early work done on the project has been marine habitat restoration. For every hectare of marine habitat disturbed, two must be added as an offset.

One fish-bearing creek, for example – Beaver Creek – has to be redirected. Workers with the Haisla-Triton Limited Partnership are working in the stream, physically relocating fish and amphibians.

“Literally they are in there with their muckers taking out fish and amphibians by the bucket and relocating them to other spots,” said LNG Canada area construction manager Trevor Feduniak.

New salt marshes are also being created, and a new fish ladder was built this summer on Anderson Creek. When the Rio Tinto aluminum smelter was built in the 1950s, a new road and bridge over Anderson Creek created a barrier for salmon, cutting off about one kilometre of gravel spawning beds upstream from the bridge.

A new fish ladder was built in the summer, and this fall, for the first time in 70 years, salmon have been able to make it past the bridge and up into the gravel beds above the bridge.

“We did one count two months ago, and we’re well over 100 coho have made their way up,” Feduniak said.

“Our dredging is doing a lot of cleanup,” Feduniak said.

There are already two marine terminals extending into Douglas Channel, both owned by Rio Tinto, one of which will be taken over by LNG Canada.

That terminal is also where the massive Asia-built LNG modules will be brought in, before being trundled to the site.

The site is being prepared for a four-train complex, but only the first two trains are part of the $40 billion that was approved in last year’s final investment decision. The Kitimat LNG complex represents $17 billion of the $40 billion in capital spending.

While it would make some sense to capitalize on the workforce that will be in place for the first two trains and sanction the second phase (two more liquefaction plants) while the project is still under construction, Pierce said the sanctioning decision will depend on markets and the first two-train project being completed on time and on budget.

“We need to make sure that Phase 2 is competitive,” Pierce said. “We want to see how we perform on Phase 1. The next two trains need to have a market, and they need to be competitive.”

LNG Canada and its main contractor – JGC Fluor – have committed to a hiring policy that gives preference to local workers, women and First Nations. As of September, of the 1,000 people employed on the project, 520 are from the Terrace-Kitimat region.

JGC Fluor has awarded 38 contracts to date for everything from coffee supplies to the multimillion-dollar Cedar Valley Lodge (Bird-ATCO Joint Venture).

Some of the larger contracts have gone to international firms, like VINCI Construction in France, which has the $400 million contract to build the site’s LNG storage tank.

To date, $1 billion in contracts and procurement have gone to B.C. companies, more than half of which – $558 million – has gone to firms and First Nations in the immediate region.

A number of firms directly or indirectly working on the LNG Canada project have partnered with First Nations in the area, notably the Haisla.

The Haisla Nation has several joint ventures or partnerships that have contracts with LNG Canada or JGC Fluor, including:

• HaiSea Marine, a partnership between the Haisla and Seaspan, with a $500 million contract to provide tugboat service for LNG carriers.

Women in the workforce

LNG Canada has worked with a number of institutes to provide the necessary education and skills training to prepare locals with skills and trades, and has committed to employing 25% of the workforce as apprentices.

As part of a commitment to get more women into skilled trades, LNG Canada and JGC Fluor launched the Your Place training program, designed to recruit women to trades and train them. In response to a recent call for applications, 1,000 women have applied.

The applicants will be placed in a four-week work-readiness training program and then take part in an apprenticeship program. Of the 12 women in the first group, three are First Nations.

One of the programs KVI offers is a high school upgrading program. It also works with the British Columbia Institute of Technology to provide a bridge watch program to certify people to work on tugboats.

As an industry town, the District of Kitimat (population 9,000) and the Haisla Nation are the biggest supporters and beneficiaries of the LNG industry in general. The town’s main industry has always been the Rio Tinto aluminum smelter, which was built in the 1950s and underwent a $6 billion expansion and modernization in 2014 and 2015.

But other industries in Kitimat have come and gone. In 2008, 120 locals lost their jobs when Methanex shut down its methanol plant, and in 2010 another 535 jobs were lost when West Fraser Timber Co. Ltd. shut down its Eurocan pulp mill.

Both of those industrial sites make up part of the LNG Canada site. Once the LNG plant is in operation in 2025, it will provide 300 to 450 permanent jobs, depending on whether it expands to four from two trains.

The District of Kitimat will receive industrial taxes from LNG Canada that start at $1.6 million a year during a five-year construction period, rising to $9.7 million per year once in operation.

The nearby city of Terrace, a 45-minute drive from Kitimat, is less enthusiastic about the project. While some citizens and businesses are profiting from jobs and increased commerce, the city is experiencing a strain on housing and public services, like policing, but getting no additional tax revenue.

The town is coping with higher crime rates and homelessness, believed to be related to increased industrial activity, not just from LNG Canada but from other projects, like mines, as well, according to Terrace Mayor Carol Leclerc.

“It’s really tough to be the best supporting actor when you don’t have any tax dollars to help out,” she said.

She said Terrace has been lobbying the provincial government through the Northwest BC Resource Benefits Alliance to get the same kind of revenue sharing it provides to towns, like Dawson Creek and Fort St. John, that are along the Coastal GasLink pipeline corridor though the Northern Capital and Planning Grant. Dawson Creek gets $12 million annually through the program, for example.

“If we had $12 million or $13 million in the City of Terrace’s pockets, things would look a lot different,” she said.