The Coastal GasLink pipeline should generally have minor impacts on the area governed by the Wet'suwet'en hereditary chiefs if it's constructed, according to an environmental assessment office report on the project.
Jan 16, 2019 10:10 AM By: Mark Nielsen 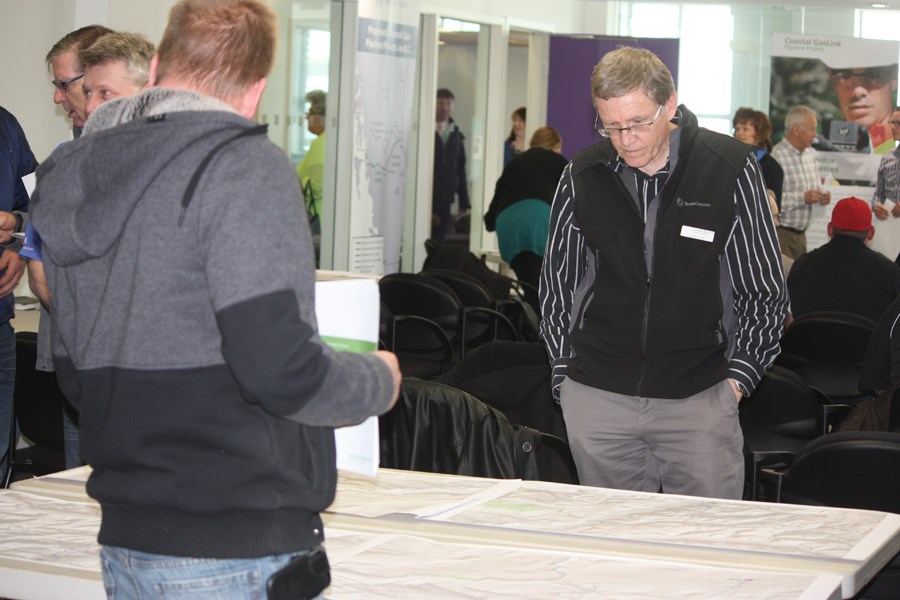 Attendees review a map for the proposed Coastal GasLink pipeline project at a TransCanda Corp. open house at the Calvin Kruk Centre for the Arts.Mike Carter

The Coastal GasLink pipeline should generally have minor impacts on the area governed by the Wet'suwet'en hereditary chiefs if it's constructed, according to an environmental assessment office report on the project.

However, the report also says the hereditary chiefs, as represented by the Office of the Wet'suwet'en, oppose the project, saying it is in "deep conflict with core Wet'suwet'en laws and values."

The matter came to a head last week when RCMP were called in to take down a blockade on the Morice River Forest Service Road south of Houston and arrested 14 people in the process.

The move was made after CGL secured an interim injunction prohibiting interference with pre-construction work along the route where is passes through that area.

On Aboriginal title, the EAO concluded the pipeline would have low to moderate impacts and they have been addressed by ensuring the Office of the Wet'suwet'en and other groups within the First Nation are "meaningfully consulted and accommodated around the potential effects of this proposed project."

On hunting, the EAO concluded the project would have a moderate impact, saying the right to hunt in the area may be affected for a short time during the construction phase, when access may be restricted for safety reasons. It also proposed a condition allowing access to the area for traditional use activities once the project is completed.

On trapping, the Office of the Wet'suwet'en did not provide any information on any trap lines that may be held by its members, the EAO says, but added the work may require short- or long-term relocation of portions of traplines.

"However, the proposed pipeline corridor is narrow enough that the disruption to each trap line should not prevent a trap line holder from trapping in other parts of the trap line territory, and should therefore have a relatively small effect on overall access to trapping," the EAO says in the report.

As such, the project was expected to have minor impacts on members' right to trap.

On fishing, the Office identified a dozen fishing sites near the route of which only one, on the Nadina River, is directly on the route. The next closest is 2.8 kilometres to the north at Bulkley Lake.

However, it would also cross the Clore River, Gosnell Creek and Morice River.

"The majority of fish-bearing watercourse crossings would be constructed using an isolated trench method to avoid and minimize potential impact on fish and fish habitat," the EAO says in the report.

"Open cut trench method would be used only for non-fish bearing watercourse crossings, or where the channel is dry or frozen to the bottom."

As well, hydrostatic testing would be planned for the summer or fall when the water supply is high and warming the water is not necessary. As well, no additives would be put in the water and CGL has assured the pipe used for the testing will be internally coated and so very clean.

On gathering, the EAO found crossing Gosnell Creek woulc adversely affect wetlands in that area. In answer, the EAO proposed site-specific mitigation and monitoring and a "not let loss" target for wetland structure.

Given the narrowness of the corridor, the EAO doubted access to sites to gather berries would be limited.

The Office identified a number of cultural heritage sites - used mainly for hunting, trapping or fishing and some associated with cabins, within 2 1/2 kilometres of the pipeline, particularly along the Morice River valley area, as well as a number of trails crossing the pipeline route.

Requirements of the Heritage Conservation Act must be met prior to and during construction, the EAO said, and rated the impact as minor.

About 180 kilometres of the 670-kilometre pipeline would pass through Wet'suwet'en traditional territory. While all five elected Wet'suwet'en band councils support the project and have entered benefit agreements with CGL, the hereditary chiefs maintain they have authority over all off-reserve territory.

The EAO's report was part of a provincially-mandated review of the project.