Some of the world's biggest oil and gas companies are at work in two of Canada’s hottest oil and gas plays, the Montney and Duvernay. Analysts with Peters & Co.
Jan 25, 2019 11:46 AM By: Deborah Jaremko 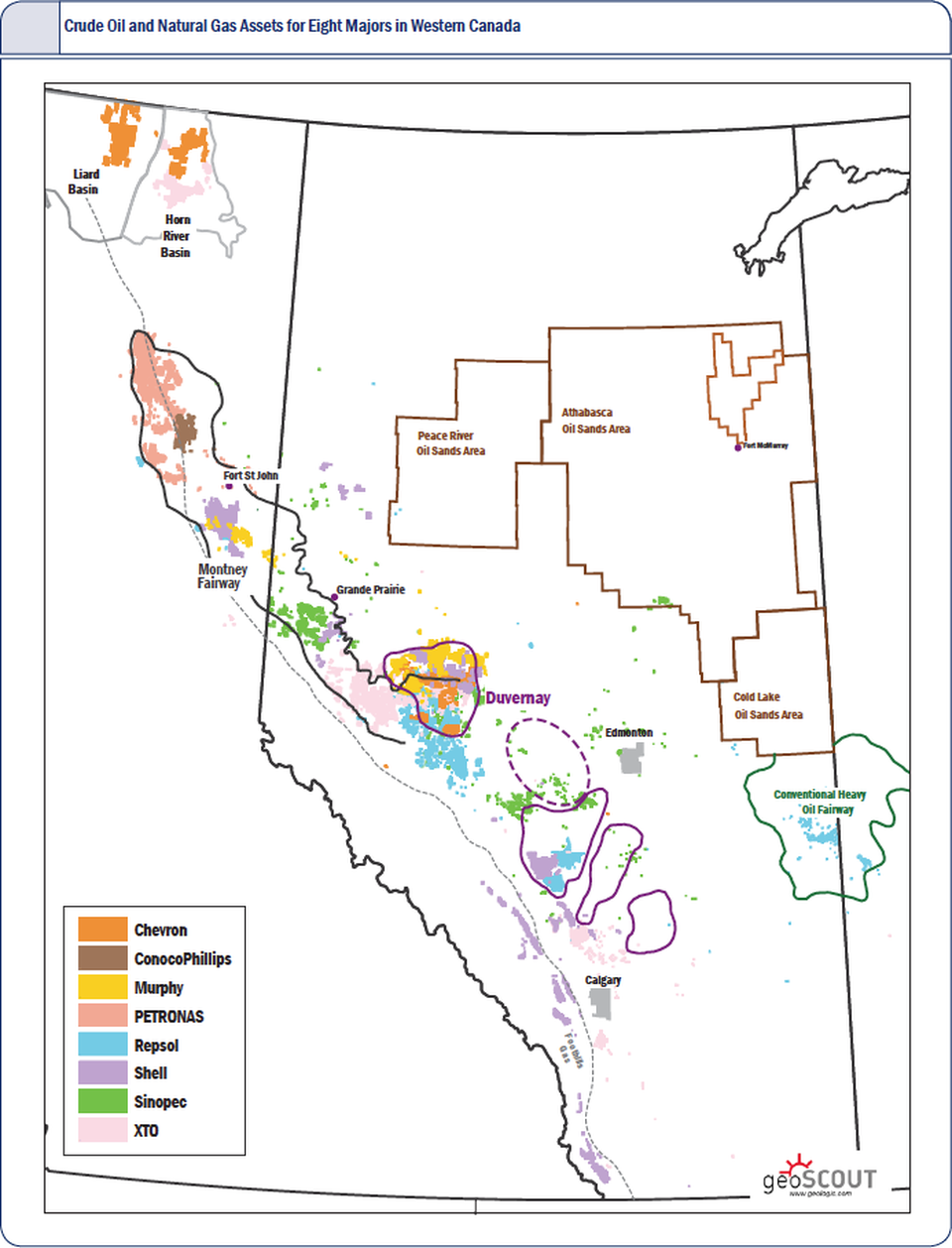 Some of the world's biggest oil and gas companies are at work in two of Canada’s hottest oil and gas plays, the Montney and Duvernay. Analysts with Peters & Co. Limited provided an update this week on the activities of eight of those companies: Chevron, ConocoPhillips, Murphy Oil, Petronas, Repsol, Shell, Sinopec and Exxon Mobil.

Here’s what they had to report.

Peters & Co. said that Chevron’s main focus currently is on developing the Duvernay at Kaybob, approximately 260 kilometres northwest of Edmonton. The company drilled 37 wells there in 2018 and is producing approximately 82 mmcf/d of natural gas plus liquids, making it the the third largest Duvernay producer in the area, analysts said.

Chevron has committed to long-term infrastructure deals at Fox Creek with both Pembina and Keyera, they added.

ConocoPhillips continues to delineate its Montney resource at Blueberry in northeast B.C., Peters & Co. said. The company drilled a 13-well test pad in 2018 that is currently in progress.

The company increased its 2019 Canadian budget by US$200 million year-over-year to US$500 million, which also includes spending at its Surmont in situ oilsands project. ConocoPhillips plans more delineation drilling at Inga/Blueberry and possibly additional infrastructure spending, analysts said.

Murphy Oil is currently producing approximately 220 mmcf/d from its operated position in the Montney fairway at Tupper/Swan/Sunrise, Peters & Co. said.

In addition, the company drilled several multi-well Duvernay pads throughout 2018 in both the gas-condensate and volatile oil windows at Kaybob as part of its joint venture with Athabasca Oil Corporation, in which Murphy holds 70 percent interest and is the operator.

Malaysia’s state oil company is a 25 percent owner of the LNG Canada project, which received a positive final investment decision in October 2018.

The same month, Petronas brought a drilling rig into the Town area of the Montney play in northeast B.C. — its first drilling since April 2017, analysts noted.

The company has also committed 700 mmcf/d on the North Montney Mainline, which is expected to be in service in Q4/2019.

Spain’s Repsol drilled three Duvernay wells at Willesden Green in 2018, which are testing the extent of the oil window with two of the wells reporting initial oil production in November, Peters & Co. said.

With the positive final investment decision on LNG Canada, led by Shell, development at the company’s Groundbirch acreage in northeast B.C. continues.

Duvernay development at Kaybob has also been robust, analysts said, with Shell having approximately 200 Duvernay wells on production.

New well licenses indicate that drilling will shift towards the north/northwest, into the volatile oil window, they said.

China’s Sinopec has a sizeable Montney asset of approximately 150,000 net acres south of Pipestone at Wapiti, according to Peters & Co.

The company currently has 24 Montney wells on production, of which, only ~10 wells have been brought on stream over the last three years.

Peters & Co. said that Exxon Mobil and its subsidiary, XTO Energy, are focused on developing the gas-condensate Duvernay at Kaybob, with 27 wells drilled in 2018.

The companies also continued delineation of the Montney resource at Resthaven with two new drills in 2018, plus nine new wells brought on steam throughout the year.