Alexandra Lehmann's hockey journey is proof that there's a way for northern girls to keep playing hockey after high school, and beyond.
Apr 1, 2021 12:47 PM By: Dillon Giancola
Previous Next
1 / 1 Alexandra Lehmann is dialed in on the play in front of her during SWHL A play in Switzerland this year.supplied
Expand
Previous Next

When goalie Alexandra Lehmann emailed the Swiss Ice Hockey Federation inquiring about playing for the national program, she had no idea that 12 months later she'd be winning the championship of the country's top female hockey league, in part on the strength of her two final-round shutouts.

Lehmann was coming off her second season with Ottawa's Carleton University, where she was part of a goalie tandem and posted a .919 save percentage in eight games, when U Sports announced it was cancelling the 2020-21 season. Holding dual citizenship with Switzerland and Canada and looking for a chance to keep playing hockey, she reached out to Switzerland.

"I addressed the email 'to whom it may concern,'" Lehmann said, laughing as she recalls the memory. "I didn't expect much, but they decided to bring me in. The IIHF requires that you be a resident of Switzerland for at least a year before playing for the Swiss national team, so I moved there in July, continuing my third year studies at Carleton, had a trial period at Lugano and ended up making the team."

"It feels great, I've never won anything like this. It was a new experience to me, and really exciting. I'm kind of sad it's over to be honest because the games were so competitive," Lehmann said. Lugano had only beat the Lions once in the regular season, losing 10-1 in their last match before the playoffs, but they had no problem with Zurich once the games mattered most. 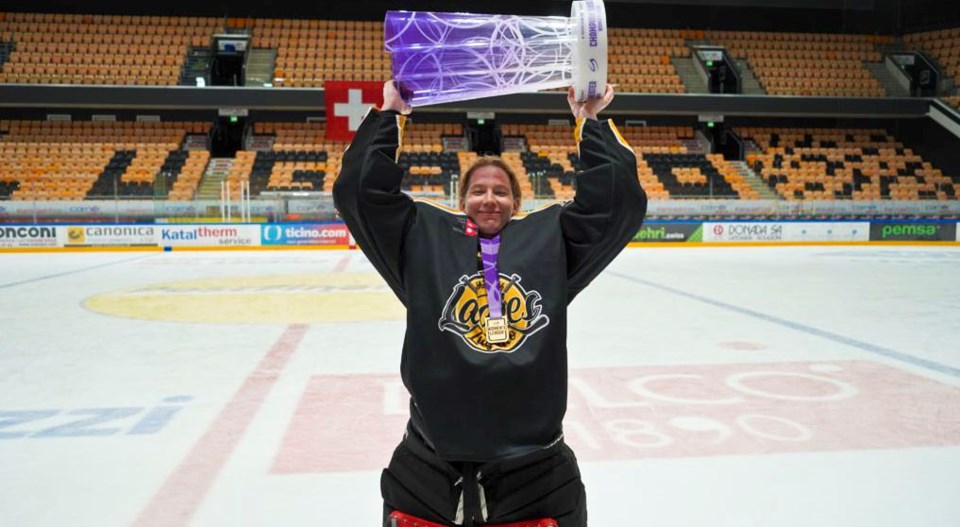 Alexandra Lehmann lifts the SWHL A championship trophy after beating the ZSC Lions 1-0 in Game 4, March 28, 2021. By supplied

Lehmann's hockey journey has been a unique one, to say the least, but it's proof that there are opportunities for girls from the Peace region to play hockey at a high level, and for females to play after college.

Growing up in Cecil Lake, Lehmann played all her minor hockey with Clearview, until Grade 10. She juggled her time playing for both Clearview and Terrace for a period, before joining the Kimberly Hockey Academy in the Kootenays to continue her development. Fort St. John's Brad Fast played four seasons with the Michigan State Spartans in Lansing, Michigan, and he used his connections to help Lehmann finish her U18 season there.

She posted a 2.24 goals against average in 60 games at Michigan during the 2017-18 season. She enjoyed the experience playing in the States and thought about playing her college hockey there, but decided to go back to Canada and ended up at Carleton.

However, when she got there, things were harder than she expected at first.

"It was tough. We had a stellar fifth-year goalie at Carleton my first season there, and I didn't even dress until January. I went from playing 60 games a season to not dressing at all, and it was really hard," Lehmann said.

However, she didn't let the adversity stop her.

"I went home that summer, worked my butt off, and apparently I improved a lot. I went into the season as the main goalie before getting hurt," she said.

Given her two seasons of ups and downs, and the fact that the pandemic was making it hard for anybody to play hockey anywhere, it would have been understandable if Lehmann took a year off, but she wanted to play.

"I want girls to know that you can keep playing after (U18). A lot of girls from home do go to the ACAC, and the Predators seem top notch. You hear often when girls from the North go to B.C. provincials that people say players from the south might have more skill or be in shape, but the northern kids know how to grind it out and play a tough game," said Lehmann.

"That's a really valuable skill to have, especially in life. And it's important for kids to know that you can go play all over the world. There are tons of leagues to finish your career. At 21, I'm already old for a Canadian female player, but here, there are players who are 30, 35, and that's common."

Not that it's a perfect system, by any means. Players in the SWHL A get paid a small amount and need full-time jobs, Lehmann said, with some women needing to use vacation time to make playoffs and bigger tournaments.

She's unsure what her future has in store — she could return to Carleton, she could come home, or could stay in Lugano. She's in the national team system and may get a look going into next year.

Either way, she's happy with how things have turned out so far.

"It's been a wild ride. Really high highs, really low lows, but I kept a good mindset through everything. Playing in Europe is as much about the experience as it is about hockey itself, and understanding there's a gigantic world out there beyond North America is pretty huge," Lehmann said.