Benson bears down on Olympics 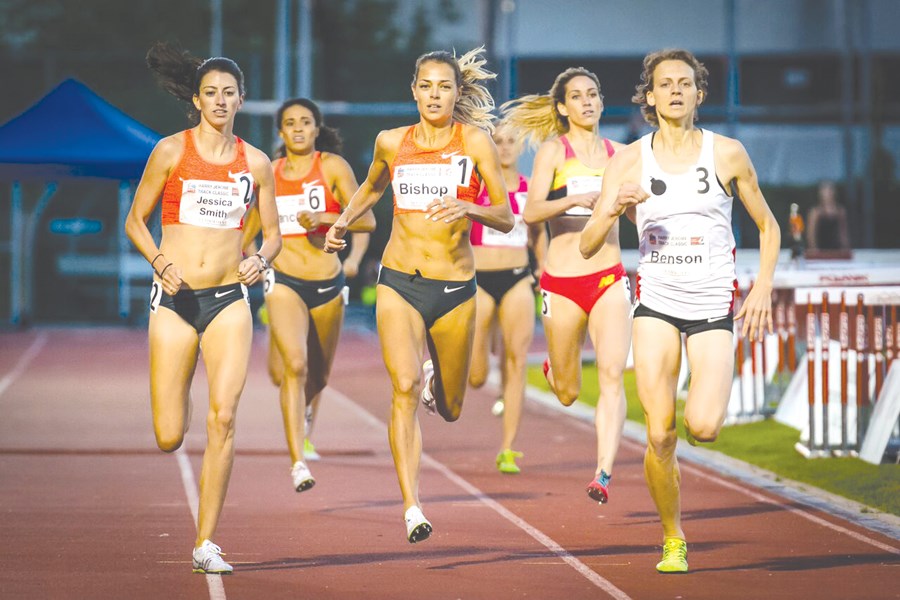 800m runner Fiona Benson (far right) leads the pack at the Harry Jerome Classic in Burnaby on June 8. Benson finished the race in a time of 2:01.48, just eight one hundredths of a second behind winner Jessica Smith.

On the track at the Olympic games in just under a year, a local resident could stand before the massive crowd in Rio De Janeiro, Brazil, a long way from the trails of Tomslake she grew up training on.

She would probably give a cautious wave, not nervous about racing though, because that’s just never been her style.

The 24-year-old is living on borrowed time in the track and field racing world, a relative unknown a year ago and extremely new to track and field, having only raced in a handful of top competitions and now potentially competing in two Olympic races.

Fiona Benson is that girl, who grew up just outside of Dawson Creek and doesn’t yet know what the next 11 months will hold for her.

What she is doing is embracing the ride that continues to rise to the top with no intention of slowing down or finding a decline.

After Benson took the Canadian track world by storm in qualifying for the 2015 Beijing IAAF Track and Field Championships in the 800 metre, she continued her rise with a personal best 1:59.59 that gave her another time under the prestigious two–minute mark this year.

On the Canadian side only Benson and world champion silver medalist Melissa Bishop have cracked that mark this year and are two of the five Canadian women in history to break the mark.

“My main emotion coming out of Worlds was excitement for when I race more, race better, and run faster,” Benson said about her race in the semi’s when she finished fifth, but with a personal best.

“It was certainly not one of my strongest races; at the same time I'm so grateful for this season and the chances I have now to really earn my stripes and become a skilled runner, instead of crossing my fingers and hoping things go my way.”

Benson followed that up with an Olympic standard qualifying race in the 1,500m to close out her season in Italy.

“I went to Europe for the extra travelling and racing experience, and if the season's fitness translated into a 1,500m standard that was a huge bonus, and a real head start on next year's goals.”

Benson added the most valuable lesson she learned between Beijing and Italy was really putting together what it takes to be a professional runner.

“Running can be lonely,” she said.

“The best part of Beijing was probably meeting a bunch of people who all share the lifestyle; it makes the idea of 'running pro' more normal and do-able.  When I went to Europe to race after I actually saw people I recognized, and that was great.”

As for her goals in 2016, with two Olympic qualifying times, it means she can spend the year focusing on whichever discipline she wants, with the assurance that she can likely go to the Olympics in the event she chooses. It’s still too early to tell.

“The 1,500m has been my favourite distance since the first time I raced it, and I think it will be my ultimate focus,” she said.

“This year just worked out better to chase the 800m, and I think it worked really well with my experience level and fitness base, but we've got a year to decide which will be my stronger event in 2016. Luckily they complement each other well; I think I can work on speed with the 800 and strength with the 1,500 during the regular track season, and make the final decision closer to the Olympics.”