It may have been a trial run for Zone Provincial Championships later this month, but the 50 plus athletes at the annual Dawson Creek Sneak were dealing with more than just a new course when they organized at the start line on Saturday.
Oct 5, 2015 5:29 PM By: Byron Hackett 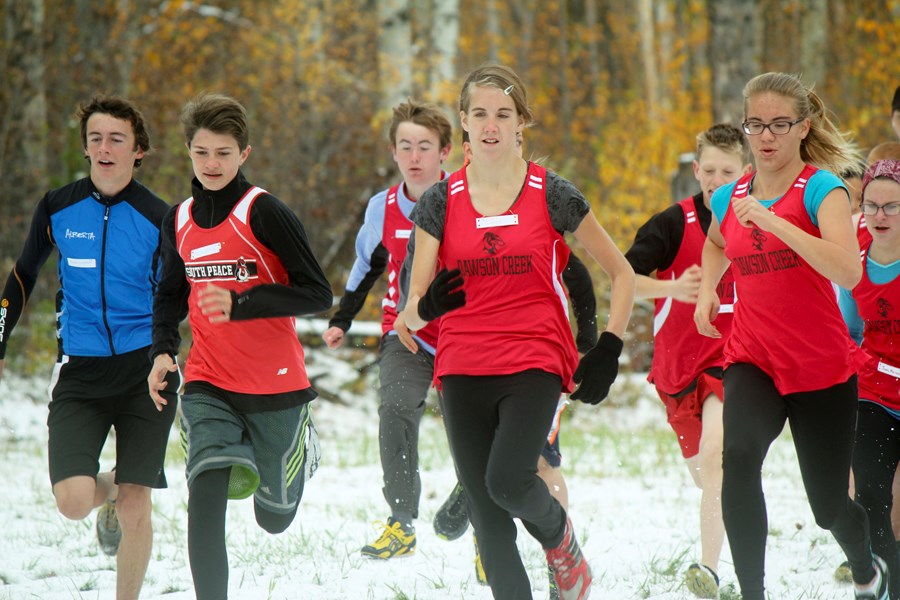 Roger McPhail, Ashley Wangler and Shauna Wangler got off to a good start in the Dawson Creek Sneak on Saturday at the Bear Mountain Nordic Trails.Byron Hackett

It may have been a trial run for Zone Provincial Championships later this month, but the 50 plus athletes at the annual Dawson Creek Sneak were dealing with more than just a new course when they organized at the start line on Saturday.

It was minus one and there was at least a few inches of snow on the ground at the Bear Mountain Nordic Ski Trials and although it seemed like it at times, skiing wasn’t on the agenda for the annual cross country event.

“Considering the lovely conditions,” Dawson Creek Secondary School cross country coach Eric Wolf said with a cold chill in his voice and as much sarcasm as he cold muster.

“It went quite well, we don’t usually have a big turnout for our elementary races which is not surprising, especially since our elementary series is going. Really good turnout from my team, and it’s the first race for Fort St. John and Tumbler Ridge students got a chance to come to…It’s great for them to get a chance to be on the course…this was a great experience.”

Wolf added that the conditions on the trails Saturday were less than ideal and in difficult weather, it’s all about preparation.

“You plan your warm up and keep warm really…in these kind of conditions you just want to keep your body warm and stay warm as long as you can,” he said.

The race was broken up into two categories, first 14 students ran 1.6 kilometres in the elementary category, with Emalee Chapple of Fort St. John coming out with the top time of seven minutes and 52 seconds. Drake Horseman was second with a time of 8:04 and John Garwah was third in 8:07.

In the combined junior and senior high school race, in the 4.3km distance, Jordan Lundstrom had the top time of 16:36 and Ashley Wangler had the top female time in 20:07. Hannah Lundstrom was second in the Jr. high girls race with a time of 20:46 and Kenzie Chillcott from Dr. Kearney Middle School was third in 21:42. Adam Wangler of DCSS was the second Jr. boy to finish in 17:06 and Dario Staples finished third in 17:07.

There was some confusion in the 6.3km race for the senior boys, as several ran more than the required distance and a few ran just short of the distance. Tyler McElderry from DCSS ended with the best time of 29:56. Chris Nelisson finished second in 32:37 and Branson Tufford had a time of 32:39.

Overall, Wolf thought his team ran well and is in a good situation to finish the season strong.

"I have a pretty good plan about what to expect to do [over the next three weeks],” he said. “They are working hard, their running form has really improved and they are getting faster… a bit harder workouts and get a bit more speed out of them. The girls are running quite well and as a team they are really cohesive together.”