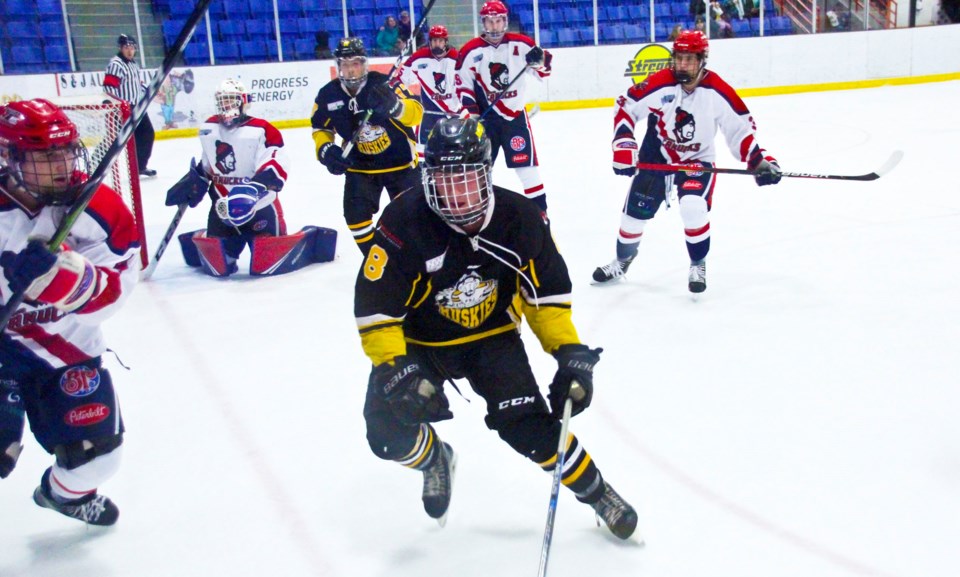 Dean Whitcomb made a big impact on the Huskies in his 2.5 years with the team. His leadership, physical intensity, and big-play prowess will be missed.Dillon Giancola

After parts of three seasons with the Fort St. John Huskies, forward Dean Whitcomb is making the jump to college hockey, and will play for Marian University in Fond du Lac, Wisconsin next season.

“It was a wild series of events. I was in the middle of the bush loading logs when the Marian coach called me,” Whitcomb said. “It never crossed my mind that a college team would be looking way up here but I’m excited.”

Whitcomb, who aged out of junior this year, was one of the most versatile and reliable players on the Huskies roster.

“Dean is a very impactful individual, and a really intelligent player,” said Huskies coach Todd Alexander. “He would show up to to the rink with dirt on his face after working a 10-hour shift in the bush, and then would be the hardest working guy at practice.”

Whitcomb made an impact on the Huskies the minute he joined the team, halfway through the 2018-29 season. He was thrown in the lineup and became a playoff hero. In Game 5 of the NWJHL final that year, Whitcomb scored the tying and game winning goals against the County of Grande Praire Kings in the final six minutes of the game to send the Huskies to Grande Prairie up 3-2, and won the title in Game 6.

However, it was far from a guarantee that he would make that kind of impact when the Huskies reached out to him. Whitcomb was living in Europe at the time he got the call, and hadn't played hockey in six months.

"I hadn't played in a long time. I was nervous, but I instantly became best friends with everyone. That's what made the team so good, we were so tight and nobody felt left out in the room," Whitcomb said.

Whitcomb becomes the fourth Huskies player to make the unlikely jump to Marian. This year’s captain, Aiden Tegart, committed to the team in February, and former Huskies goalie Jonathan Bateman is already there. Jarod Lang, who graduated last year, is a two-time ACHA defenseman of the year with Marian.

"It's definitely a plus to have your buddies already there. Reuniting with (Bateman) will be a hoot," Whitcomb said.