In an effort to integrate skateboarding into school programming, Dr. Kearney students took part in an introduction to skateboarding class June 8 and 9, with a very stoked response from students and teachers alike.
Jun 10, 2021 10:57 AM By: Dillon Giancola
Previous Next
1 / 1 Daville Black showed his fellow Grade 8 students the ropes during gym class at Dr. Kearney, June 9, 2021.Dillon Giancola
Expand
Previous Next

In an effort to integrate skateboarding into school programming, Dr. Kearney students took part in an introduction to skateboarding class June 8 and 9, with a very stoked response from students and teachers alike.

Cole Andrews led the classes, which consisted of teaching students everything from proper stance and how to correctly push off, to going up and down a ramp, according to their ability.

"It was totally awesome. The district went and bought high quality skateboards and we had good equipment to work with. The teachers were active and involved in helping out, and the kids just went for it," Andrews said. "There was that typical mix of students in gym class who hung back a bit, but for the most part they were trying hard and not afraid to wipe out."

Andrews said the school district, led by Director of Instruction Carleen Andrews, recognized a need to highlight some unorthodox sports, and purchased some new skateboards and equipment. The Dr. Kearney sessions were part of a district trial to see what the interest would be, with the potential to make skateboarding a regular gym class lesson, or to give schools a one-day skateboard camp each year going forward.

"I like it very much, there aren’t many opportunities to skateboard at school so this was great," said Grade 8 student Janessa Huxley. "I've been skateboarding for two years. I love the fact that you can do a bunch of tricks if you know how to do it properly, and I would love it if we could do this more regularly at school." 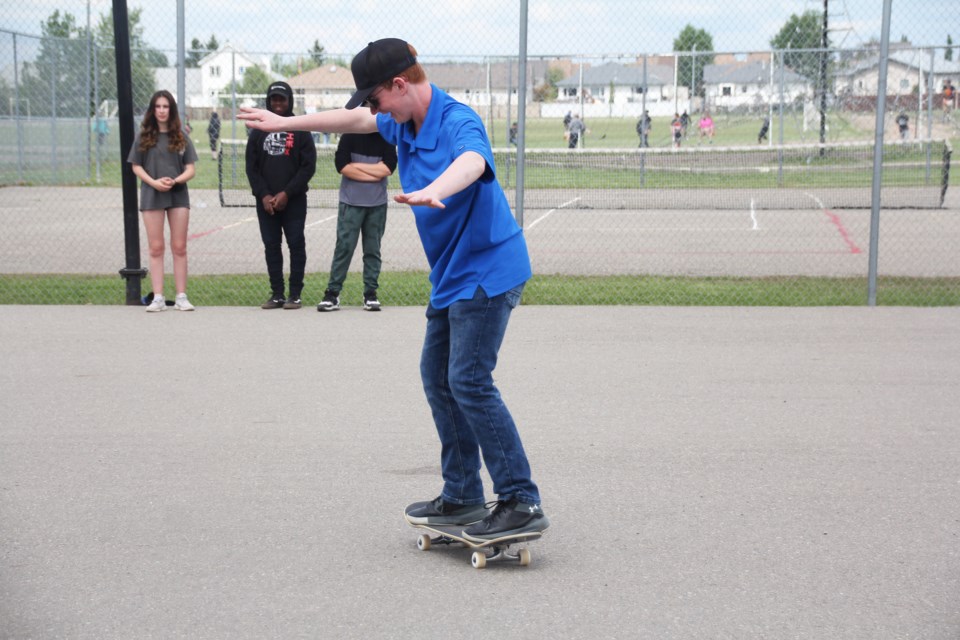 Brayden Rowe tentatively found his way on the skateboard during a Dr. Kearney gym class, on June 9, 2021. By Dillon Giancola

The school district last gave skateboarding a try in February 2020, when the Indigenous skateboarding group Nations came to Fort St. John to host a clinic for Indigenous junior high students. Plans to bring the group back this year were delayed due to the pandemic, but Andrews said talks are in the works for doing something similar in the future.

Dan Cimini, whose Grade 8 physical and health education class participated on June 9, thought the classes were a great idea.

"This is cool, a lot of kids don't always want to participate in phys-ed, or don't see themselves as athletic, but here they are wanting to give it a try. Plus, skateboarding is just cool, and it's great to see this being offered," Cimini said.

It's unclear how skateboarding will fit into the curriculum going forward, but Cole Andrews is confident it will be included.

"We really want to continue skateboard programming in the school district going forward, whether that's through bringing up pros to skate with at-risk youth, doing classes like this, or holding camps for Indigenous students," he said.

Skateboarding has positive impact on youth
Feb 6, 2020 9:00 AM
Comments