This week. the Fort St. John Huskies are focused on playing the Sexsmith Vipers at the North Peace Arena on November 23.
Nov 20, 2019 11:00 AM By: Dillon Giancola 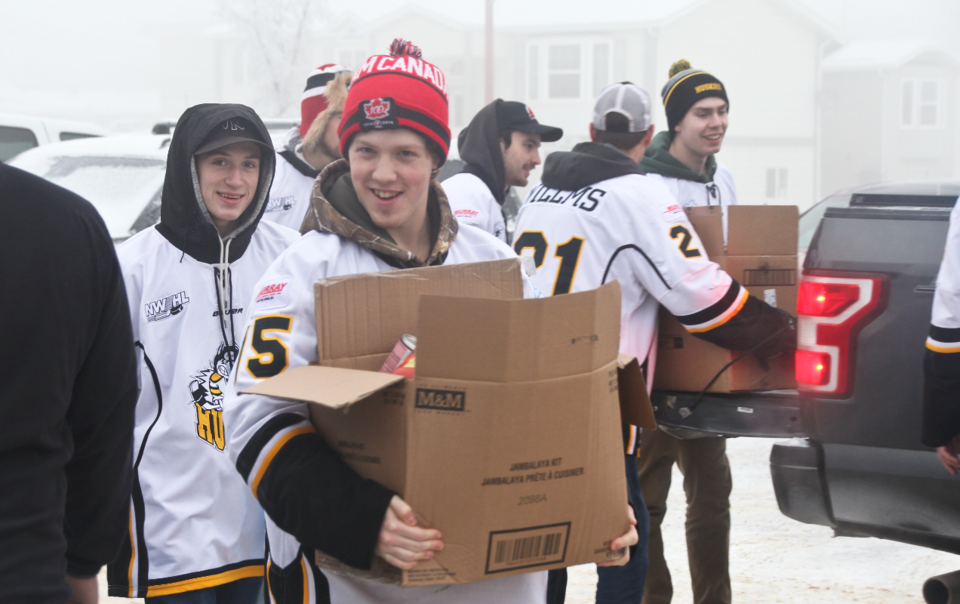 Huskies player Joel Bourgeois was all smiles while loading the team bus up with food on Dec. 2.Dillon Giancola

This week. the Fort St. John Huskies are focused on playing the Sexsmith Vipers at the North Peace Arena on November 23. After, the Huskies will turn their attention to two of their annual charity fundraisers — the Men's Health Game and Teddy Bear Toss on November 30, and the Fill the Bus charity food drive on December 1.

The Huskies host their rivals from Dawson Creek, the Canucks, at 8 p.m. on November 30. Not only is it sure to be a good game — as of today the Huskies and Canucks are one and two in the standings, respectively — but money will be raised for the Fort St. John Hospital Foundation, from the gate and 50-50, and there will be a Movember booth to join in on the mustache fun. As well, the Huskies will host the Teddy Bear Toss, with all the bears going to the Salvation Army. The toss is a longtime Senior Flyers tradition that the Huskies are carrying on in their absence.

The 22nd Fill the Bus food drive goes the next day, with proceeds going to the Salvation Army. The team is looking for volunteers to help in the collecting and sorting of food. To volunteer, meet at the North Peace Arena at 10 a.m. on Sunday, December 1, or call Al Karasiuk at 250-261-9466 to find out how you can help.