In just under one month the Fort St. John Senior Flyers will take to the ice at the North Peace Arena to embark on a season that the team hopes will extend further into the spring than in did last season.
Sep 10, 2014 11:59 AM By: Byron Hackett 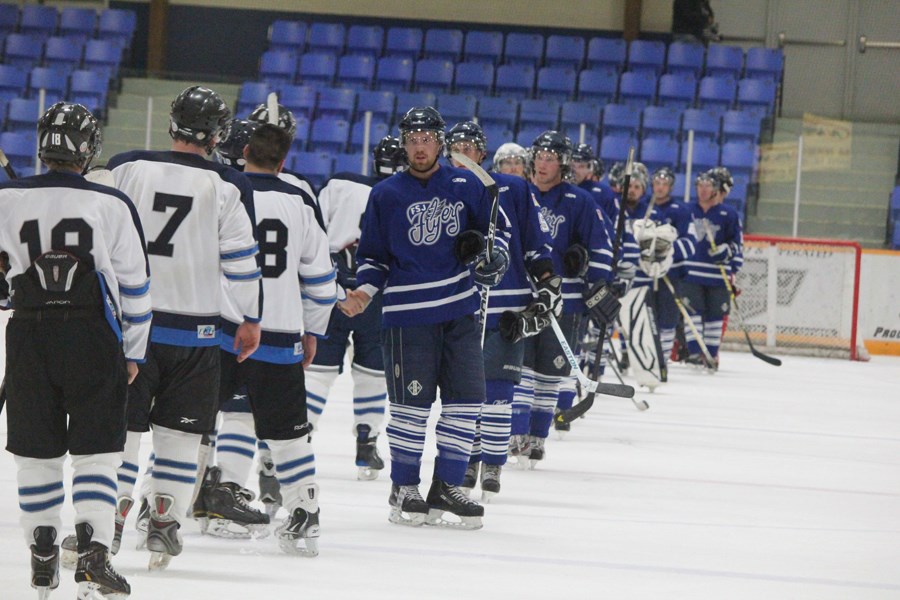 The Fort St. John Senior Flyers will open up training camp on Monday, October 6 at the North Peace Arena.Byron Hackett

In just under one month the Fort St. John Senior Flyers will take to the ice at the North Peace Arena to embark on a season that the team hopes will extend further into the spring than in did last season.

On Monday the team released the plans for training camp, which will take place over five ice sessions from Monday, October 6 to Wednesday, October 15. After that the Flyers will take on the Fort Nelson Yeti in a two game mini series on Saturday October 18 at 8:30 p.m. and Sunday October 19 at 1:00 p.m.

Fort St. John Senior Flyers General Manager Lee Hartman said there is always an uncertainty at this level about the group that will turn out for the camp, but from what he has heard he expects a good showing.

“I think we are going to have a good group of guys out for training camp. We’re hearing that there are some guys that have moved into town for work, so there might be some new faces,” he said. “We had a really young team last year and I think they are chomping at the bit after the way we went out of the playoffs last year.”

That is certainly one of the challenges of senior hockey, replacing the bodies that have moved on for work or various reasons, but Hartman sees it as a welcome challenge. The group this year will likely find itself more experienced than the one that lost 4-0 to the Spirit River Rangers in the first round of the playoffs.

“It’s fun because we don’t know who has moved to town or what could possibly lie ahead,” he said. “We look forward to it…we know some of the young guys and some of the veterans that are coming back—the nucleus of our team and we are pretty confident in that. It’s fun to see.”

“We have a couple Huskies that are graduated from last year that are still in town and going to probably dawn the Flyer Jersey this year. That’s fun too,” he said.  “The Huskies are doing a real good job of developing players and making them fit in our system quickly and easily.”

Hartman also hopes that his team will be able to make it all the way to the Coy Cup, which early signs indicate will be played in Fort Nelson.

“We are looking forward to a couple exhibition games right off the start of the season with them. We hope to head up there sometime early in the season to get some games in with them and get a little rivalry going so if we are able to make it to the Coy Cup we can face off with them.”

Training camp dates are as follows all at the North Peace Arena: