Isabella Ziebart will suit up for the GPRC Wolves women's soccer team next season.
Mar 10, 2021 10:06 AM By: Dillon Giancola 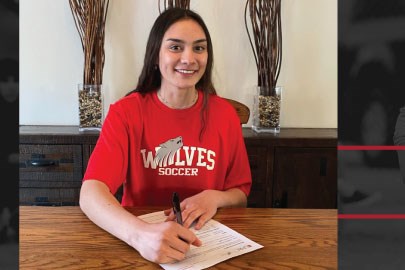 Isabella Ziebart has signed on to play for the Grande Prairie Regional College Wolves women's soccer team next season. GPRC

Isabella Ziebart is making the jump to college soccer, after the Fort St. John player signed with the Grande Prairie Regional College Wolves women's soccer team for the 2021-22 season.

“I am grateful for the opportunity provided by GPRC to continue playing soccer after high school. I am confident that the coaching staff at GPRC can help take my game to the next level," Ziebart said in a release.

Ziebart has a lot of accomplishments to her name, winning back to back MVPs of the Kelowna Canaday Day tournament with the FSJ Northern Strikers in 2018 and 2019, and winning the Caledonia Cup in 2019, among other impressive tournament showings.

“I am most excited to be contributing to the women’s soccer team’s success on and off the field, getting to know my new teammates, and continuing to play with fellow former players from FSJ Northern Strikers,” Ziebart said.

GPRC is a good place for Ziebart to start her college career, as the Wolves have signed many players from Fort St. John in the past four years. Wolves coach Chris Morgan previously coached in Fort St. John, and his experience with these players has been instrumental in bringing them over to GPRC. Ziebart is no exception.

“I first coached Isabella as a guest coach for the U14 Fort St John Soccer Club in 2015. Isabella was a standout player at that time. I have continued to monitor her development while she played competitions in Edmonton. A multi-talented athlete, Isabella will bring a dynamism to the Wolves midfield next season,” said Morgan.

Ziebart is currently in her Grade 12 year at NPSS. She's the second North Peace athlete to sign with a college team for the next school year after Gryphon Talbot signed with the Olds College basketball team in February.