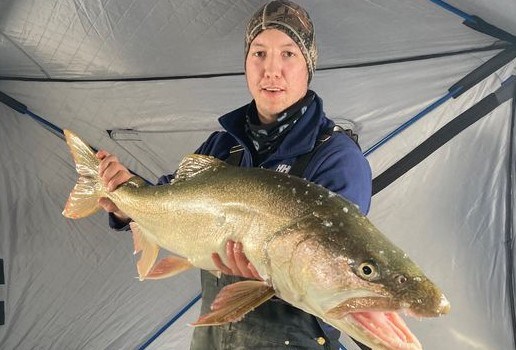 Kenneth Hampel shows off his 90cm Lake Trout, caught while participating in the Shake Off the Blues Ice Fishing Derby.supplied

The inaugural Shake Off The Blues Ice Fishing Derby came to a conclusion on March 7. When it was all said and done, the Prince George-Mackenzie riding finished in first place with 1,080 points, followed by Cariboo-Chilcotin and Peace River North for silver and bronze, respectively.

Peace River South was fourth out of the five participating provincial ridings with 512 points, behind PRN’s 688. The North had 36 catches, from 13 members.

The five Northern B.C. MLAs were the main sponsors of the event, with Prince George-Mackenzie even saying a few words on the derby during a recent meeting of the legislative assembly. While the winning riding was originally going to get 50 % of the proceeds, Angler’s Atlas President Sean Simmons said the prizes will be divided up between all five ridings, according to the results. Each MLA chose a charity from their riding to receive the prize money.

The prize money for Peace River North will go toward the Fort St. John Women’s Resource Society, chosen by MLA Dan Davies.
Simmons is pleased with how the virtual derby went.

“I think it was a really good first test for ice fishing in Northern BC. We were able to get people out and enjoying the sport in a crazy year, all while social distancing and being safe,” said Simmons. “It’s been a lot of fun and a great opportunity to see some great fish and some enormous beasts.”