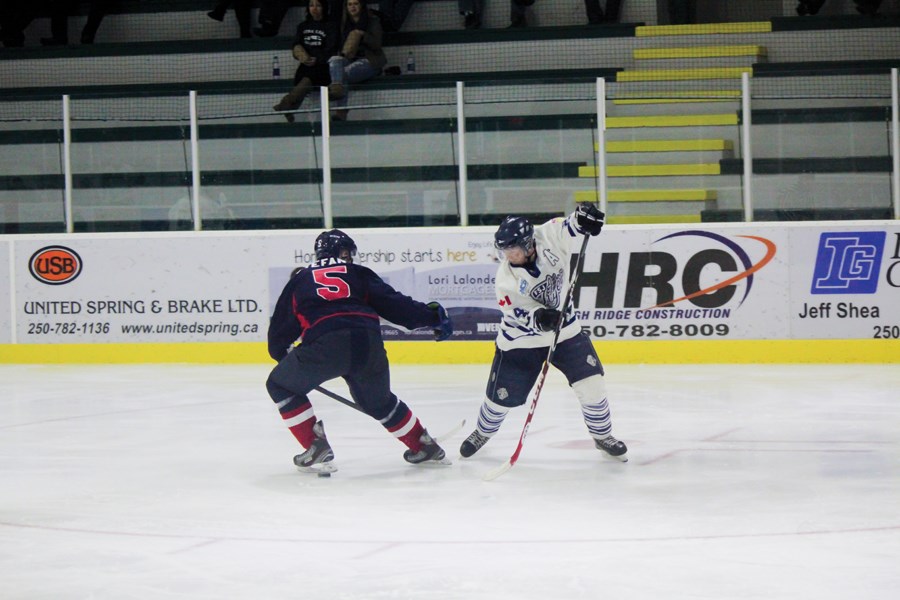 It was like a game of last goal wins, with no end in sight after two periods of play.

The Fort St. John Flyers did end with the last goal, shutting the Dawson Creek Senior Canucks (7-2-1-0) out in the third period in a 9-5 win at Memorial Arena on Tuesday night.

The rink was packed with the biggest crowd all year, and fans were treated to an offensive show that the NHL would have been drooling at.

Adam Horst, Ryan Carter and Joey Massingham each scored twice for the Flyers (10-1-0-2) and rookie goalie Travis McLean won his fourth game of the season. Offensively, Horst noted the team has just been clicking in their last three wins.

“Our last couple games have been good, in practice we just worked on playing our positions better and applying a little more pressure and it just seems to click better for us when we apply pressure instead of sitting back and letting them come to us,” the assistant captain said.

Six goals in the first period started the show, with the Flyers scoring four, including a Ryan Carter marker 24 seconds into the game.

Lorne Weaver scored only a minute later, and on a night that wasn’t friendly to goaltenders, Mike Lalonde lit the lamp 22 seconds after that.

The Flyers would score three more times in the first on Canucks goalie Lincoln Carriere, who allowed all nine goals on 34 shots. Jeff Shipton, Joey Massingham and Carter rounded out the scoring in the opening frame.

Chris Stevens opened the scoring in the second on a power play point shot for the Canucks, but Massingham responded 24 seconds later. Goals in less than a minute were a trend Tuesday, as Jeff Stevens scored 40 seconds after the Flyers goal.

Rick Cleaver’s two-point performance moved him four points ahead of Manning’s Josh Rutherford for the overall points lead in the NPHL.

The loss was the Canucks first on home ice this season and head coach Mike Cooper said it was just a talented team that exposed his club’s defensive weaknesses on Tuesday.

“Fort St. John came to play, they worked hard, they got the puck behind our D. They forced our defense and they hemmed us in our own zone and they got quality goal scoring chances,” he said.

On the other hand the Flyers have won their last four games, a streak that Horst believes has simply come on the back of hard work.

“That was a great end to the first half of the season,” he said.

“The last three games for us have been our turning point and we’ve made big strides in the last three and we’ve been improving. We seem to be working on the stuff that’s paying off.”

Fort St. John is now off until Jan. 2 when they travel to Spirit River.

The Canucks will play two more before the break, a trip to Spirit River on Friday followed by the Falher Pirates coming to Dawson Creek on Saturday, Dec. 19.