North Peace Hockey League teams held a third conference call Thursday night regarding the status of the 2020-21 season. Nothing new was reported for the Fort St.
Nov 13, 2020 11:06 AM By: Dillon Giancola 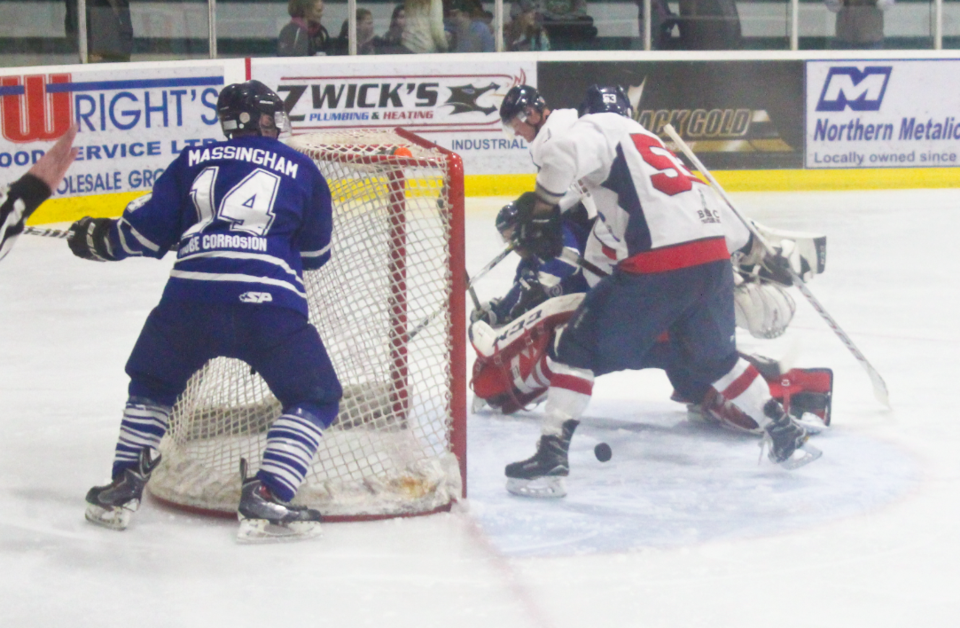 Joey Massingham watches the puck cross the line during the Flyers crushing 4-3 overtime loss in Dawson Creek on Jan. 18 against the Sr. Canucks.Dillon Giancola

North Peace Hockey League teams held a third conference call Thursday night regarding the status of the 2020-21 season. Nothing new was reported for the Fort St. John Flyers and Dawson Creek Senior Canucks — cross border travel still isn't permitted and the lack of revenue from ticket sales and sponsors would make playing a season a tough task.

According to Flyers President Paul van Nostrand, who was present for the call, three of the Alberta teams are proposing to play a shortened season in a three-team cohort. Regardless of what happens, the league has told teams unable to play this year, or who take a pass on the season, that they will not need to go through the rules and procedures for joining the league as a new team would.

While the Flyers await further word on the fate of the season, it’s hard not to wonder what missing a second-straight season would mean for the Flyers and the state of senior hockey in Fort St. John.

The Flyers weren’t able to ice a team last year due to a lack of committed players. According to van Nostrand, the commitment is there this year.

The Flyers had a core group of players dedicated to reviving the team and ensuring there was enough people to play and attend practices and games. Among that core were mainstays Adam Horst, Travis McLean, and Joey Massingham, as well as Robbie Sidhu and Ty Gullickson.

Missing the 2019-20 season didn’t dampen the group’s interest and will to play.

“I still have a love for the game. It’s always nice to still compete at a good level of play, and be with the guys around the rink and in the locker room,” Massingham said.

“We had just the right amount of guys to come back. We all really want the Flyers to survive, but we have to see how covid affects it,” Massingham said, adding it may be hard to hold a shorter season at this point due to other commitments that guys may have made in the meantime.

However, if the team isn’t able to play this year, Massingham doesn’t think that will affect the chances of the Flyers returning to the ice in 2021-22.

“All that means is that there will be two more years of younger guys coming in with legs,” Massingham said about the prospect of missing a second-straight season.

“There is still a lot of hockey talent in the community. Plus, most of us have been doing this for 25 years and haven’t found anything to take its place yet.”

Van Nostrand is hopeful as well, and doesn’t plan on moving on from the Flyers.

“I sincerely hope we’ll continue on regardless. I’m not planning to abandon the ship for some time yet,” said van Nostrand.

“I’m hopeful by the time spring and summer come around in 2021 there will be a handle on things nationally. I’m very optimistic and my wish is that we’ll have a team for the 2021-22 season.”