Enthusiasm is not a skill, but an attitude. So, as eager soccer players arrived at the Dr. Kearny gym in Fort St. John for the 9th annual University of Victoria Vikes soccer camp this week, head coach Bruce Wilson knew what to expect.
Jul 28, 2016 1:25 PM By: Byron Hackett 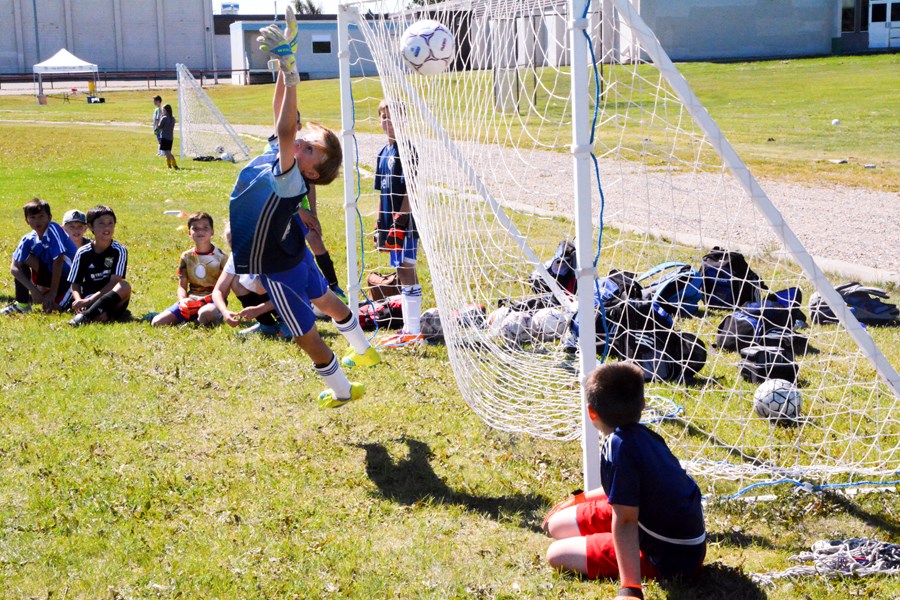 Aiden Korfmann, 10, attempts a wild diving save at Vikes soccer camp in Fort St. John. The runs all week long at Dr. Kearney and Surerus Fields and will wrap up on Friday.Byron Hackett

Enthusiasm is not a skill, but an attitude.

So, as eager soccer players arrived at the Dr. Kearny gym in Fort St. John for the 9th annual University of Victoria Vikes soccer camp this week, head coach Bruce Wilson knew what to expect.

“We enjoy coming up to Fort St. John,” Wilson said. “The kids that we work with are very good, very nice to work with and our coaches like it.”

Wilson has been a soccer coach for nearly three decades and says the one thing he and his counselors always notice, most of whom are current or former Vikes players, is how engaged kids are with the skills from day one.

“The fact that they want to be there, there are soccer-related kids. Often in Victoria we get kids in our soccer camps that aren’t necessarily soccer players,” he said.

“This camp is all soccer people and we notice it right from the opening day. The coaches have mentioned to me they are very keen and they really want to be here and it’s great to work with kids like that.”

Numbers are down this year, last year’s camp had about 92 players from ages 9-16, this year only 63 are registered. Despite this, Wilson says he is still continually impressed by the talent that is being fostered in the younger age group of players in Fort St. John.

“I’ve always said when I come up here the little guys, all the players up here are as good as anyone down in Victoria,” he said.

It is in the years the follow that Wilson recognizes where the problem might arise, as playing against top level talent means regular trips to Edmonton and Prince George.

Wilson added it’s tough in just a week to pass on very specific skills, but he noted giving the group the building blocks to take back to their teams into the indoor season and next year a vital to growing as a player.

“Basically it’s all about running, it’s about passing and dribbling and shooting and control,” he said. “Each day we have a different theme… and Friday is a combination of everything. We try to go through all the fundamentals of the game and always keeping the camp fun.”

Kaden Atkins, a veteran of the Vikes camp, said while he enjoys learning the fundamentals, he thinks having university level players teaching the skills is crucial to improvement.

“It’s really cool for them to come here and teach us how they do it,” he said.

Mason Miranda, 15, added the coaching has really improved his shot since he’s been at the camp the last few years.

“Shooting, because I’ve never been a very hard kicker, but they helped me with the fundamentals of it because they have experience,” he added.

Wilson and his UVIC player coaches will have very little time to recover before their pre-season gets underway as after a long trip back to Victoria on Saturday, they start into training for the upcoming year on Sunday.