Speedway petitions to have fans allowed at race track 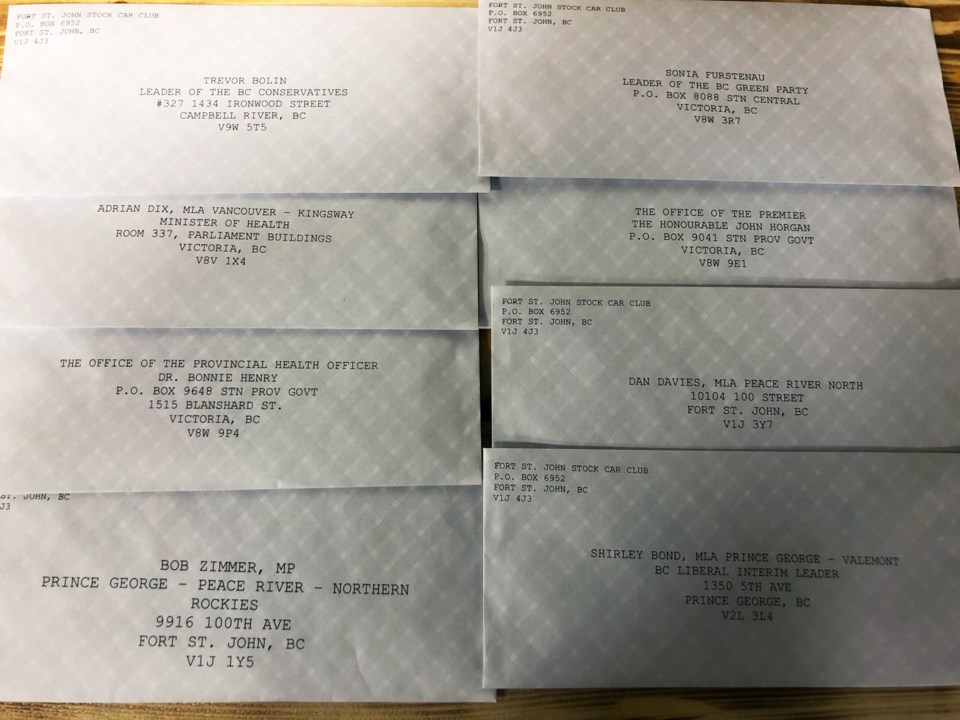 The letters sent out to government officials on behalf of Taylor Speedway and the Fort St. John Stock Car Club to petition to have fans allowed at the track.Krysta Lafountain

Peace Region motorsport season is are just around the corner, and although there are no PHO restrictions preventing car races from taking place, restrictions remain on on the amount of people that can participate on public events and gatherings.

Like many non-profits, the Fort St. John Stock Car Club and Taylor Speedway rely on revenue from ticket sales to survive, and letters have been sent to local and provincial government officials petitioning for spectators to be allowed at races this season.

"Since the onset of Covid-19, all aspects of life have been affected, no doubt, more industries than others. However, the non-profit areas have been affected severely, due to lack of the ability to generate income to maintain our facilities, and make ends meet when it comes to the costs to keep our organizations operating. We rely heavily on donations from sponsors, membership fees, and income generated by our fans coming to watch our sport," reads part of the letter, written by Speedway director Krysta LaFountain.

"As most motorsports in BC is held outdoors, and all locations having the facilities necessary to maintain proper cleaning and spacing protocols, we are petitioning for motorsports across the province to be allowed to have spectators allowed at our events."

The Taylor Speedway season is set to start May 28 and 29 with the Bomber Invitational.

LaFountain has sent letters to MLA Dan Davies, MP Bob Zimmer, and PHO Bonnie Henry, among others, and encourages other members, race fans, and members of other racing groups in the province to do the same.

"I really hope this goes beyond just our club. The rest of the clubs around the province could petition for their tracks to be open too, and I encourage people to copy and paste, print, or send their own letter," LaFountain said. The full letter can be found on the Taylor Speedway Facebook page.

The Taylor Speedway was able to hold its season last year, but had to limit the number of people at the track to less than 50. This meant only half of the car classes could race in a weekend, only one pit crew member was allowed per driver, and no fans were permitted at the track.

"We rely a lot on income generated from our fans who come watch. We just barely got by last year, we had a lot of club members, sponsors and executives help us out with that, but we don't know how sustainable that is," said LaFountain.

"I think people don't realize how big racing is in our province. We should find a way to make it work. Most of the tracks in the province are non-profits, and every industry is affected, but ours is one that seems to get thrown on the back burner. If everyone made enough noise, maybe this could become an issue (authorities) would think about."

Though a schedule is in place, LaFountain said it remains to be seen what race weekends will look like, and whether the races will be financially viable enough to take place.

In the letter, she describes how fans could be allowed in safely.

"Our facilities are large, and instituting social distancing is an easy step to allow our spectators to come watch our events safely. It is possible for the spectator benches to be blocked off every six feet to allow for the proper social distancing to keep our fans and volunteers safe," reads the letter.