Several Fort St. John user groups were frustrated and blindsided last week when the city abruptly announced the North Peace Arena wouldn’t be reopening in November as planned. “(It) was very disappointing,” Fort St.
Oct 26, 2020 11:37 AM By: Dillon Giancola 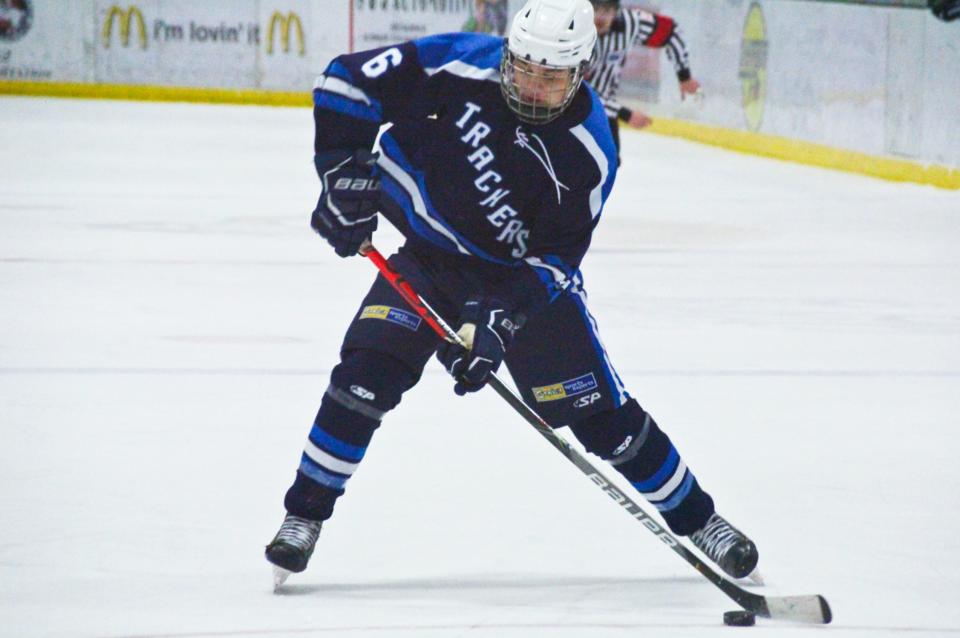 Mason Gosling rifles a shot on the Barons net as the Trackers overmatch Fort McMurray 10-2 at home on January 11, 2020.Dillon Giancola

“(It) was very disappointing,” Fort St. John Huskies President Michael Bacso said, referring to the city’s Oct. 19 announcement. “(The city) gave us one date, then they bumped that back, and bumped it back again. I understand they have a staffing issue, but a lot of companies in town have had those issues and they have been able to figure it out.”

The Huskies are one of the many groups that rely on, and anticipated, the arena’s opening. Among the others are the Figure Skating Club, the Minor Hockey Association, the Trackers hockey club, and the city’s rec hockey leagues.

“Obviously, we were definitely looking forwad to getting back into the North Peace Arena, especially for the stability of knowing exactly what ice time would be,” said Jennifer Hammond, head coach of the Fort St. John Figure Skating Club.

“We all understand it’s a difficult time and that nobody knows the answers yet. But the primary focus for us is youth, and to help them make decisions to be healthy. When we are limited by our city, it’s pretty frustrating.”

Trackers head coach Gerard Dicaire said not having the arena open for use affects everyone.

“The city has blamed modified schedules, staff shortages and the pandemic as reasonings for changing opening from November 2 until 2021. What they don’t realize is having the third ice surface is essential,” Dicaire said.

After first blaming staff shortages for the delayed reopening, the city elaborated Oct. 22, saying that it wasn’t able to get new staff properly trained and certified in time.

“To be truthful, we agonized over the decision. What it came down to was an assessment,” said Milo MacDonald, the city’s new chief administrative officer. “We realized we have great staff not fully trained, (and with) the backdrop of technical requirements, we weren’t confident we could fully guarantee that we could be able to do it safely.”

Delaying the reopening until 2021 has real consequences for these user groups. For minor hockey, athletes would typically have three ice times per week between practices and games.

FSJMHA President Dave Batten said not having a third ice surface will likely result in some teams and age groups having just one ice time per week. Most teams have had two ice times a week for the past two months, but that’s expected to change as younger age groups are about to start and will need a share of its allocated ice time.

The figure skating club has been operating its Star programs since September, but hasn’t been able to begin its CanSkate program for beginner skaters, and was relying on the opening of the arena. In addition, ice times at the Pomeroy Sport Centre have been released on a month-to-month basis, making it hard for clubs to maintain members.

"We usually have registration that covers an entire year, and a set schedule, but now we can't guarantee what programs and ice times we can have each month. We've already had skaters in younger age groups who were able to participate in our September, but with a different schedule for October, were unable to continue," Hammond said. "That's not how we like to run our cub."

Another issue facing minor hockey and figure skaters is the 15 minutes required between ice times to sanitize benches, surfaces, and equipment. This eats into the amount of time a skater can have per ice time.

"Our skaters are now only skating 45 minutes a session. For our oldest group of skaters, who typically had two sessions a week, that were an hour and a half long each, they are now cut down to just 45 minutes or an hour at a time," Hammond said.

Outside of September training camp, the Huskies rely on the use of the arena to run all aspects of its program besides road games.

"We don't know the full extent of how we'll be impacted or what kind of ice time we'll have," said Bacso. "Right now we have three practices per week, not including games. Our first choice is to keep playing at the Pomeroy, but if that's not available we would have to reach out to Taylor or Clearview for more arena space."

The Trackers are affected in a similar way.

"We used to have two team concept practices during the week and games every second or third weekend," Dicaire said. "Now we are struggling to find ice twice per week due to all user groups sharing two ice surfaces."

There are ice times available during the daytime Monday to Friday, and sometimes on the weekend, though a lot of those don't comply with user group needs.

"The frustration level is high with the city's decision and they need to re-evaluate," Dicaire said.