OTTAWA — Canada's chief public health officer says new information on COVID-19 and variants prompted the National Advisory Committee on Immunization to suddenly cancel its planned announcement on who should get the Oxford-AstraZeneca vaccine.
Apr 21, 2021 3:03 PM By: Canadian Press 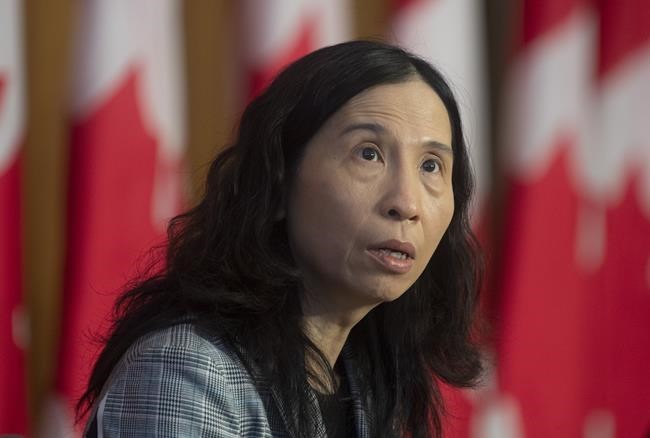 OTTAWA — Canada's chief public health officer says new information on COVID-19 and variants prompted the National Advisory Committee on Immunization to suddenly cancel its planned announcement on who should get the Oxford-AstraZeneca vaccine.

NACI was minutes away Tuesday afternoon from providing an update to its advice that AstraZeneca shouldn't be given to people under the age of 55 but the planned briefing was called off. That cancellation came even as five provinces had already decided to lower the age limit as doses of the vaccine sat in freezers and cases of COVID-19 soared.

The cancellation immediately led to concern from some Canadians that NACI knew something they didn't about the vaccine's safety.

Not so, said Dr. Theresa Tam, who is not part of the committee but interacts with them as the country's top public health doctor.

Tam said Wednesday the panel believed some new data on the virus and its variants of concern, and the effect they were having on severe outcomes, had to be taken into account. She said that information came from the provinces and territories and she doesn't know if the new data will change the advice NACI had been set to deliver.

"Just to reassure everyone that it is because they received some new data that they thought was pertinent in terms of analyzing the impact of the COVID-19 on the population in light of variants of concern, and not because of any changes in the data already existing for the thrombosis disorder itself," Tam said.

NACI said on March 29 that the vaccine should be used only in Canadians at least 55 years old as regulatory bodies in Europe and Canada studied data on a small number of people who developed a rare blood clotting disorder after being given a dose of AstraZeneca.

The thinking at the time was that early data showed more of the people getting the clots were under the age of 55 and that COVID-19 posed a much higher risk to people over 55, therefore getting vaccinated was even more critical to that age group.

A week later, European and British regulators both said the vaccine was safe and very effective, even though it did appear the vaccine could be causing a new syndrome — now called vaccine-induced prothrombotic immune thrombocytopenia, or VIPIT — in a very small number of people.

The syndrome is caused by an immune reaction that affects the blood platelets, leading to clots in the brain and digestive system.

There were reports at the time of 222 people getting VIPIT out of 34 million shots.

Health Canada said last week its review of the data came to the same conclusion. Canada has had three confirmed cases of VIPIT — one woman in her 30s in New Brunswick, a man in his 60s in Alberta and a woman over the age of 55 in Quebec. All three are recovering at home.

Canada has received 2.3 million doses of AstraZeneca overall, and expects to get at least 23.6 million by the end of September.

Tam couldn't say when NACI would come out with updated advice, but she said the provinces that jumped ahead of those recommendations did so using information provided to them at a meeting with NACI over the weekend.

"So they do have the analysis at hand as they were making their decisions that you have seen announced over the last few days," she said.

All provinces agreed to follow the NACI recommendation in March, even though the advice was not binding.

British Columbia, Alberta, Saskatchewan, Manitoba and Ontario this week stepped away from it, offering AstraZeneca to people at least 40 years old. Quebec chose to offer it to people who are at least 45. The Atlantic provinces, where the COVID-19 pandemic is under control, have not changed their age limit at this point.

NACI is made up of vaccine experts who volunteer their time to make non-binding advice on how vaccines should be used in Canada. The group of 14 doctors, public health policy experts and infectious disease scientists develop their guidance based on a consensus view of available scientific data.

While Health Canada authorizes vaccines based on their risks and benefits, NACI's role is then to look at the authorized vaccines and recommend how they are used, such as who should get them first.

Provinces get to decide whether to follow the advice.

Several European countries continue to limit the use of AstraZeneca to individuals older than 55 or 60, including Italy, Germany and France, while Denmark and Norway are no longer using it at all.

The United Kingdom recommended it not be given to people under 30 or to pregnant women.

This report by The Canadian Press was first published April 21, 2020.

Liberals tap another military officer to replace Fortin on vaccine campaign
May 17, 2021 6:30 PM

B.C. residents who had AstraZeneca vaccine can choose second-dose vaccine
May 17, 2021 6:23 PM
Comments