VANCOUVER — A British Columbia provincial court judge compared a man's actions on breaking COVID-19 rules to selling the powerful opioid fentanyl on the street as she sentenced him Wednesday.
Apr 28, 2021 5:09 PM By: Canadian Press 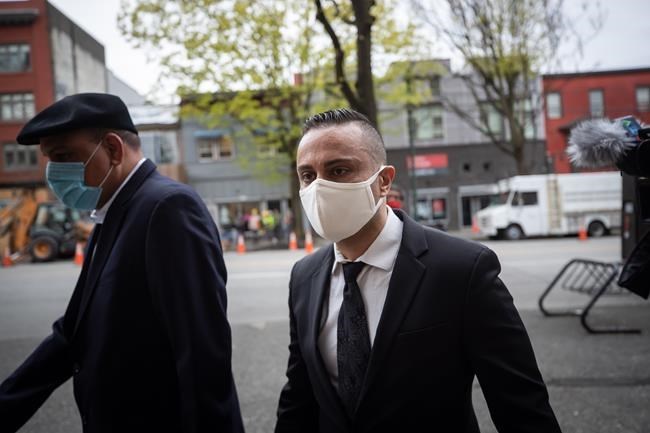 VANCOUVER — A British Columbia provincial court judge compared a man's actions on breaking COVID-19 rules to selling the powerful opioid fentanyl on the street as she sentenced him Wednesday.

Mohammad Movassaghi was handed one day in jail, a $5,000 fine and 18 months' probation after previously pleading guilty to disobeying a court order, failing to comply with a health officer's order and unlawfully purchasing grain alcohol.

Judge Ellen Gordon described the event as "a crime, not a party," and something attended by people "foolish enough" to put their and their grandmothers' health at risk.

"What you did, sir, is comparable to individuals who sell fentanyl to the individuals on the street who die every day. There's no difference. You voluntarily assumed a risk that could kill people in the midst of a pandemic."

Vancouver police used a search warrant in January to enter the penthouse condominium and more than $17,000 in fines were issued against him and guests in the home.

Gordon noted his one-day jail sentence has already been served, but he'll also have to complete 50 hours of community service.

The police warrant alleged that the condo had a stripper pole and spot and mood lighting, and a woman told police that people were asked to remove their shoes to prevent noise.

The sentencing began about an hour later than scheduled because the judge insisted that Movassaghi present himself in person rather than on the phone.

Crown lawyer Ellen Leno said Movassaghi is the first person in B.C. to be sentenced under the province's Public Health Act for breaching COVID-19-related orders.

She said the sentence and fine should be a deterrent and "send a clear message to others."

The judge said she would have "imposed" a "period of incarceration" had the Crown asked for it.

Leno said police arrived at Movassaghi's home around 3 a.m. and found 78 people in the roughly 1,800-square-foot space. She described the scene as a "makeshift nightclub," saying people were "shoulder to shoulder."

"There was a pole mounted spanning the two floors, with a topless woman standing next to the pole and people seated watching her," she said.

The police saw menus for "Granny's Exotic Bar" that had drinks for sale priced between $26 and $1,500 for a bottle and a DJ station, Leno said. Lap dances cost $46.

The Crown also said police found Movassaghi hiding when they went into his condo.

This was disputed by his lawyer, Bobby Movassaghi, who is also the brother of the accused.

The defence lawyer told the court that the party had "blown up into something a lot more than what it was supposed to be."

Gordon replied by saying that what Movassaghi hosted was "not a party."

"I have parties, or I did prior to the pandemic, and I invited people, I invited guests," she said.

Movassaghi told the court he wanted to apologize to the judge and to the public for his "grievous error of judgment."

In the months since, Movassaghi said he has been following the public health orders "to a T," practising social distancing and wearing a mask.

"I learned a hard lesson."

This report by The Canadian Press was first published April 28, 2021.

Note to readers: This is a corrected story. A previous version said Mohammad Movassaghi pleaded guilty to two counts of failing to comply with a health officer's order.

Black man's jaywalking ticket in Halifax was racial discrimination: rights board
May 5, 2021 3:21 PM