Canada to unveil emissions targets and India's grim record: In The News for April 22

In The News is a roundup of stories from The Canadian Press designed to kickstart your day. Here is what's on the radar of our editors for the morning of April 22 ... What we are watching in Canada ...
Apr 22, 2021 2:18 AM By: Canadian Press 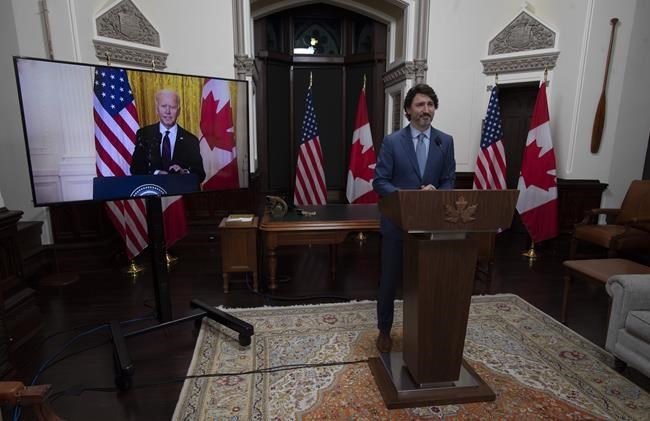 In The News is a roundup of stories from The Canadian Press designed to kickstart your day. Here is what's on the radar of our editors for the morning of April 22 ...

OTTAWA — Prime Minister Justin Trudeau is set to announce today what Canada's new targets will be for reducing greenhouse gas emissions by the end of the decade.

The government says he will unveil the targets during a virtual address to world leaders convened by U.S. President Joe Biden for a summit on fighting climate change.

Trudeau will speak at a session which the U.S. State Department says is where leaders will discuss their country's situation and "announce new steps to strengthen climate ambition."

Biden and Vice-President Kamala Harris are scheduled to open the event, which will also include speeches from the leaders of China, the European Commission, United Kingdom and India.

Canada enters the event as Biden is trying to advance America's efforts on fighting climate change and has focused billions in spending to promote electric vehicles.

Like Biden, Trudeau is under pressure from different groups to bring forward a higher emissions reduction target.

TORONTO — Daycare workers are calling on the Ontario government to move them up in the province's COVID-19 vaccination priority list.

An open letter to Premier Doug Ford written by the Ontario Coalition for Better Child Care and the Association of Early Childhood Educators of Ontario asks him to make inoculating daycare staff a priority.

It has more than 10-thousand signatures.

A survey jointly conducted by the two organizations in March found that 70 per cent of 1,875 respondents wanted to be vaccinated immediately.

The same survey found that 43 per cent of respondents have considered leaving the daycare sector since the pandemic began..Carolyn Ferns, the public policy and government relations co-ordinator for the Ontario Coalition for Better Child Care, says her membership is worn out after more than a year of the pandemic.

She says the government needs to recognize the important work done by daycare workers and prioritize them for vaccines.

MINNEAPOLIS, Minn. — The family of Daunte Wright is preparing for his funeral today.

It comes just days after guilty verdicts were handed down for the former Minneapolis police officer whose killing of George Floyd set off protests around the world and a reckoning over racism.

Her chief said it appeared the officer mistakenly used her gun instead of her Taser.

The officer resigned soon after and is charged with second-degree manslaughter.

The 314,835 infections added in the past 24 hours raise India's total past 15.9 million cases since the pandemic began. It's the second-highest total in the world next to the United States. India has nearly 1.4 billion people.

A large number of hospitals are reporting acute shortages of beds and medicine and are running on dangerously low levels of oxygen.

The New Delhi High Court on Wednesday ordered the government to divert oxygen from industrial use to hospitals to save people’s lives.

The government is rushing oxygen tankers to replenish supplies to hospitals.

India’s Health Minister Harsh Vardhan said today that "demand and supply is being monitored round the clock.”

He said in a tweet that to address the exponential spike in demand, the government has increased the quota of oxygen for the worst-hit seven states.

Chris Hadfield became the first Canadian to walk in space. Hadfield and an American colleague on the space shuttle "Endeavour" crew unfolded and installed an updated model of the Canadian-built robotic arm that would help build and maintain the International Space Station.

LOS ANGELES — The 200,000-plus LeVar Burton boosters who signed a petition calling for him to be the new “Jeopardy!” host will get to see him try the job on for size.

Burton is among the final group of guest hosts for the quiz show, which lost its longtime Canadian host Alex Trebek to cancer in November.

The show's producer has put off announcing Trebek's successor.

Burton's fans say the “Star Trek: Next Generation” and “Roots” star would be a good fit.

OTTAWA — A Bloc Quebecois MP apologized Wednesday for taking a screenshot of a Liberal colleague who inadvertently appeared nude during virtual proceedings in the House of Commons last week.

Bloc MP Sebastien Lemire rose on a point of order to apologize for breaching parliamentary rules, which prohibit taking photos or video of proceedings.

He did not specifically name the MP involved — Liberal William Amos, a fellow Quebecer who represents the Pontiac riding.

"Today I would like to apologize to the House for breaking the rules by taking a photograph of a colleague during question period on April 14,” Lemire said in French.

Lemire said he's already apologized personally to Amos but added: "I nevertheless want to reiterate it publicly, to him personally, to his family, to colleagues and to anyone I may have offended."

"I have no idea how that photo made its way into the media," he added.

But Liberal whip Mark Holland said the apology, while welcome, doesn't resolve the issue. He said the Bloc is so far refusing to reveal with whom Lemire shared the screenshot, frustrating attempts to find out who leaked it publicly.

"It's essential we know where Mr. Lemire sent this photo," Holland said in an interview. "We do not accept that he is not going to say where he sent this."

"This is an image that has been shared around the world, has become a joke, a punchline in late-night talk shows in other countries."

The government has asked House of Commons Speaker Anthony Rota to investigate the matter. Asked if Liberals have also asked for a police investigation, Holland said "we're now reviewing all of our options."