China up for discussion at G7 Leaders' Summit, but also back home in Canada

CARBIS BAY, CORNWALL, ENGLAND — The thorny issue of how to handle increasing competition and aggression from China came up as leaders of the world's wealthiest countries gathered Saturday in an English seaside resort, although it remains to be seen h
Jun 12, 2021 6:20 PM By: Canadian Press 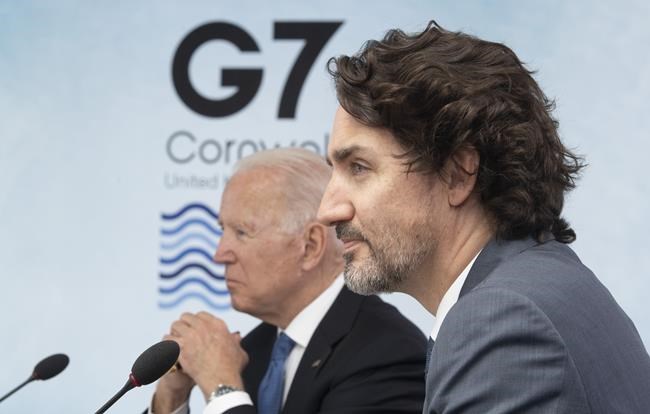 CARBIS BAY, CORNWALL, ENGLAND — The thorny issue of how to handle increasing competition and aggression from China came up as leaders of the world's wealthiest countries gathered Saturday in an English seaside resort, although it remains to be seen how far they will go in standing up for human rights.

Prime Minister Justin Trudeau has faced calls for stronger action on the issue, including from the Opposition Conservatives, who have urged him to press his fellow G7 leaders to take a collective stand against China and push for the relocation of the 2022 Beijing Olympics.

The Associated Press reported that United States President Joe Biden is set to make such a move by asking the G7 leaders to call out China for its use of forced labour practices against ethnic minorities, including Uyghur Muslims.

It cited two senior administration officials, speaking on condition of anonymity, saying the president wants to see the denunciation included in a communique signed between all participating countries when the summit hosted by British Prime Minister Boris Johnson concludes on Sunday.

The G7 leaders also presented an infrastructure plan called "Build Back Better for the World," a name that echoes Biden's presidential campaign slogan but also a phrase used often by the Trudeau Liberals when talking about post-pandemic recovery. The plan calls for spending hundreds of billions of dollars alongside the private sector, while adhering to climate standards and labour practices.

It is designed to compete with China's "Belt and Road Initiative," which launched a network of projects in large parts of the world, primarily Asia and Africa. Critics say China's projects often create massive debt and expose nations to undue influence by Beijing.

Trudeau has been under increasing pressure at home over Canada-China relations, most recently around two scientists at the National Microbiology Lab in Winnipeg who were escorted out of the premises in July 2019. The two scientists, Xiangguo Qiu and her husband, Keding Cheng, were eventually fired in January. The Liberal government has now turned over documents relating to the issue to the National Security and Intelligence Committee of Parliamentarians.

Both Liberal backbenchers and opposition MPs voted back in February in favour of a Conservative motion that labelled China's treatment of Muslim Uyghurs in its Xinjiang province as a genocide. Trudeau and most of his cabinet abstained from the vote.

Stopping short of calling it a genocide, the prime minister has characterized China's treatment of Uyghurs and other ethic minorities as amounting to "systematic human rights abuses."

Canada also joined the United Kingdom, U.S., and European Union in imposing sanctions on Chinese officials over these actions, which it said was supported by "mounting evidence."

Canada's relationship with China has fractured — and under a microscope — since Beijing detained Michael Kovrig and Michael Spavor, two Canadian citizens, days after the arrest of Huawei executive Meng Wanzhou at the Vancouver airport on an extradition request from the United States.

Trudeau has said officials are working hard to get both men home and views their detention as a retaliatory pressure tactic from China over Meng's arrest.

Canada is also under pressure to decide how much longer to keep the border with the U.S. largely closed as more of its population is getting vaccinated against COVID-19.

Speaking on condition of anonymity to reporters on the trip, a federal official said Trudeau and Biden discussed the border when they talked on the side of another session with G7 leaders.

The two leaders talked about the steps both countries are considering to "cautiously" and "gradually" make changes to the border closure, the official said.

The Canada-U.S. border has been closed to non-essential travel for more than a year after an agreement was struck between both countries in hopes to keep COVID-19 from spreading.

Trudeau and Biden also talked about China, and the work happening to get Kovrig and Spavor released, according to the official.

Canada's prime minister started the second day of his summit bumping elbows and smiling for the cameras with French President Emanuel Macron ahead of the pair's bilateral meeting.

A readout from Trudeau's office said they agreed to collaborate on a list of initiatives, from developing cultural exchanges and making new commitments to promoting gender equality, particularly in the economic recovery from COVID-19.

Next to Merkel, who doesn't plan to seek re-election after her current term in office expires, Trudeau is the second-longest serving leader out of his G7 colleagues.

This report by The Canadian Press was first published June 12, 2021.

— With files from The Associated Press