VANCOUVER — Former premier Christy Clark has told British Columbia's inquiry into money laundering that she first heard from sources within government in 2015 about a spike in suspicious cash entering casinos.
Apr 20, 2021 4:08 PM By: Canadian Press 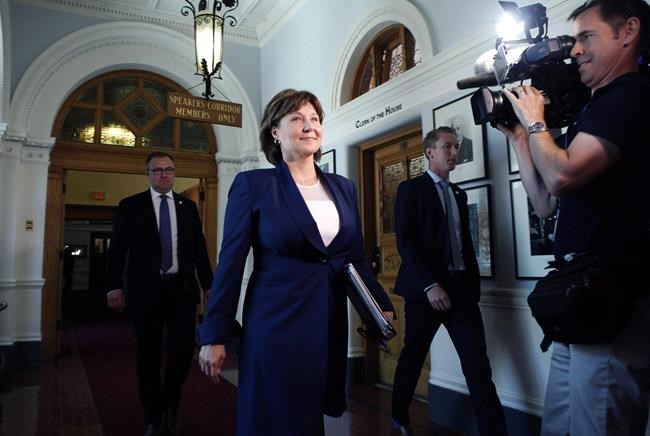 VANCOUVER — Former premier Christy Clark has told British Columbia's inquiry into money laundering that she first heard from sources within government in 2015 about a spike in suspicious cash entering casinos.

Clark testified Tuesday that she was concerned the problem was "apparently at an all-time high," though government officials also believed the spike was confirmation that increased training among B.C. Lottery Corp. and provincial gaming enforcement staff was working.

The concerns raised in 2015 by Mike de Jong, who was the minister responsible for gaming, spurred the creation of the joint illegal gaming investigation team, a division of B.C.'s anti-gang police agency, she told the Cullen commission.

Clark testified her government had also acted quickly to implement a 2011 report that recommended changes to its anti-money laundering strategies.

Patrick McGowan, a lawyer with the commission, asked Clark whether she was aware that between 2012 and 2015, large cash buy-ins at casinos consisting mostly of $20 bills had become commonplace in the Lower Mainland.

Clark said she was not, but her government was taking various anti-money laundering actions at the time, including restricting the exchange of small bills for large bills and transitioning to electronic funds transfers in casinos.

"I wasn't being kept abreast of the large cash buy-ins and the reports from law enforcement specifically," she said, adding she assumed that police would act on any reports of suspicious transactions.

McGowan asked Clark whether she would have intervened or raised concerns if she had been told about large sums of cash, mostly in $20 bills, being dropped off late at night and accepted.

"I can't answer questions about what might have happened," said Clark. "I can say that we took significant action in the years that I was there, and I think confirmation of its effectiveness is that the current government is continuing with those actions that we undertook."

When McGowan asked if Clark knew that the vast majority of money reported as suspicious was being accepted by casinos, the former premier testified she had not been aware

A discussion about managing the potentially competing pressures of maximizing provincial revenues while minimizing the risk that the financial proceeds of crime were entering casinos "was never necessary," she said.

The B.C. Liberals under Clark had campaigned on public safety and controlling government costs rather than pushing Crown corporations to bring in more revenues, she said.

"The idea was never to try and get revenue at the expense of public safety or public confidence in our casino system. Stopping crime, stopping money laundering, was always a primary concern way over and above the revenue that came from (the B.C. Lottery Corp.)."

Clark is among a number of former cabinet ministers on the commission's witness list this month. Attorney General David Eby has been added to the witness list as well.

Asked whether she knew of any steps the government took to investigate whether housing prices in B.C. could have been influenced by possible illicit money being invested in real estate, Clark said no one in government or law enforcement ever made that suggestion.

The province granted the commission an extension in March to produce its final report, which is now due on Dec. 15.