'No such thing as impossible:' Nunavut MP reflects on time in Parliament

Sitting in her Ottawa apartment on a hot morning, Mumilaaq Qaqqaq thinks about her grandparents, who, like most Nunavut Inuit of their generation, grew up on the land.
Jun 13, 2021 8:00 AM By: Canadian Press 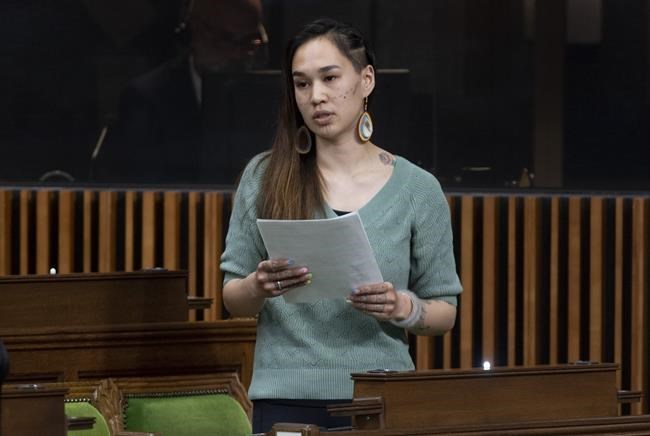 Sitting in her Ottawa apartment on a hot morning, Mumilaaq Qaqqaq thinks about her grandparents, who, like most Nunavut Inuit of their generation, grew up on the land.

She thinks about her father, who was also born there but moved with his family into what's known today as Baker Lake, the only inland community in Nunavut and the closest one to the geographic centre of Canada.

Qaqqaq is the only member of Parliament for, geographically speaking, the largest riding in the country. The 27-year-old represents about 40,000 people spread over three time zones and 25 fly-in-only communities.

She grew up in Baker Lake and worked for the territory's land claim organization and the Nunavut government in Iqaluit before she was elected in 2019.

Becoming a politician wasn't something she planned to do.

Qaqqaq says she was asked to be the NDP's candidate about two months before the vote.

"I came into this not knowing what I was walking into whatsoever. It took me a really long time to even wrap my head around what I did when I got elected."

She "hit the ground running and never really stopped."

“It’s been crazy. I can’t think of another word to describe it. I don’t think life-changing is even strong enough. It’s been a lot of things, but ultimately a huge learning experience."

Nancy Karetak-Lindell, a former Liberal MP for Nunavut, has a similar story. She was asked to run in April 1997 and was elected that June. She served 11 years before deciding she wanted to spend more time with her family.

"You don't fully grasp what the requirements of you are until you get elected," says Karetak-Lindell, who now lives in Rankin Inlet.

Qaqqaq and Karetak-Lindell both say they had to learn quickly that Nunavut's problems, including housing, health care and food security, put heavy burdens on them as the territory's only representative in Ottawa.

"You have challenges that are not felt by any other member of Parliament. The issues here are very different compared to most of the ridings in Canada," Karetak-Lindell says.

Qaqqaq took time away from work after she went on a housing tour of Nunavut last fall. At the time, she said it left her feeling anxious, depressed and overwhelmed.

"I wish I could look back and (say), 'Hey, slow down. Pace yourself. There's time to figure things out,'" she says.

The tour helped bring the territory's housing crisis to light, but there is still more work to do, she says.

"There’s an awareness of the current struggles, but not about how it’s gotten to that point and what that means for an individual and entire families and entire communities.

"I wasn’t taught about my own history about what happened in the North. When you’re around a lot of oppression and turmoil, sometimes you don’t even realize it."

Karetak-Lindell agrees the job was difficult.

"People have gone through so much hardship. You can't not feel for them. You hear things that impact you forever and it's not something you can turn off when you leave your workplace."

Qaqqaq took another leave from work in late April following a social media post she made questioning whether Labrador Liberal MP Yvonne Jones was Inuk. A doctor recommended she take time off.

"I learned my limits. Learned my balance. Learned the importance of self care and counselling and finding that balance in me."

In late May, Qaqqaq announced she won't be seeking re-election, but will be working hard in Ottawa in the meantime "fighting for Nunavummiut to have basic human rights."

Rebecca Kudloo, president of the Pauktuutit Inuit Women of Canada, says Qaqqaq's voice in Parliament has been "courageous and important" for Inuit.

"Anyone would have looked at me, including myself, until October 2019 and laughed and said, 'Yeah, right as if she’s going to get elected,'" Qaqqaq says.

"There's no such thing as impossible. I've been proving that to everybody my entire term."

This report by The Canadian Press was first published June 13, 2021.