Ontario premier in isolation and a mission on Mars: In The News for April 21

In The News is a roundup of stories from The Canadian Press designed to kickstart your day. Here is what's on the radar of our editors for the morning of April 21 ... What we are watching in Canada ...
Apr 21, 2021 2:49 AM By: Canadian Press 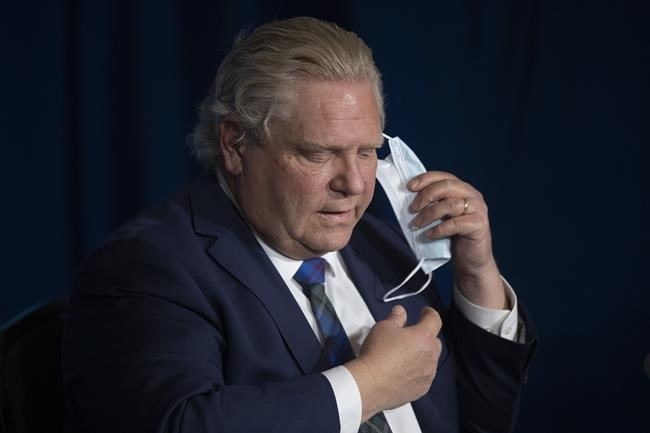 In The News is a roundup of stories from The Canadian Press designed to kickstart your day. Here is what's on the radar of our editors for the morning of April 21 ...

TORONTO — Ontario Premier Doug Ford is isolating in Toronto after a member of his staff who was in close contact with him tested positive for COVID-19.

A statement from Ford's office late Tuesday says the premier has tested negative.

It says Ford will follow all public health advice for close contacts.

The statement says members of the premier's office staff who were close contacts of the individual who tested positive will also isolate.

Ford's office says it is seeking additional guidance from Toronto Public Health on all precautions that the premier and isolating staff must follow.

The statement says Ford will continue leading his government's response to the COVID-19 pandemic while in isolation, including briefings with officials and communicating with the public.

Also, the province's two biggest COVID-19 hot spots are moving to temporarily close businesses with recent outbreaks of the virus in an effort to rein in surging case counts they said were fuelled by workplace spread.

Toronto and Peel Region announced within hours of each other Tuesday that they would issue updated orders requiring businesses that have seen five or more linked cases in the past 14 days to shut down for 10 days.

OTTAWA — The Bank of Canada will say today how it sees the economy faring over the coming months and the path for inflation amid the third wave of the COVID-19 pandemic.

Along with the outlook, the bank will announce what is happening to its key interest rate target that has been set at 0.25 per cent during the pandemic in a bid to lower interest rates on consumers and companies and boost the economy.

Governor Tiff Macklem has said the rate won't move until the economy is ready for higher interest rates and inflation is back at the bank's two per cent target.

The central bank has already said that it expects the economy will grow over the first three months of this year, after its January forecast predicted a slump to start 2021.

That better-than-expected start to the year may see the central bank raise its outlook for the full year just as the federal government did in its budget Monday.

The federal budget, based on an average estimate from private sector economists, predicted real gross domestic product to rise by 5.8 per cent this year after a 5.4 per cent contraction in 2020.

Reaction poured in Tuesday following the conviction of a white former Minneapolis, Minn., police officer in the death of George Floyd last year.

Derek Chauvin, 45, was handcuffed and taken away to prison, where he could stay for decades when he is sentenced in about two months.

The case triggered worldwide protests, violence and a furious re-examination of racism and policing in the United States.

The verdict set off jubilation mixed with sorrow across the city and around the nation. Hundreds of people poured into the streets of Minneapolis, some running through traffic with banners. Drivers blared their horns in celebration.

U.S. President Joe Biden welcomed the verdict, saying Floyd’s death was "a murder in full light of day, and it ripped the blinders off for the whole world" to see systemic racism.

But he warned: “It’s not enough. We can’t stop here. We’re going to deliver real change and reform. We can and we must do more to reduce the likelihood that tragedies like this will ever happen again.”

“What we saw over the course of last year with the sudden awareness by everyone of what racialized Canadians and racialized people around the world had known for far too long that systemic discrimination continues," Trudeau told Edmonton-based online talk show host Ryan Jespersen in an interview.

"The micro-aggressions, the overt racism, the challenges within our institutions and within our daily lives that exist need to be addressed."

MOSCOW — Two close associates of Alexei Navalny were detained today ahead of protests planned to support the imprisoned Russian opposition leader, who has been on a hunger strike since March 31.

Navalny's team called Sunday for nationwide protests after reports about the politician's health deteriorating in prison. Russian authorities have stressed that the demonstrations were not authorized and warned against participating in them.

Vladimir Voronin, a lawyer for top Navalny ally Lyubov Sobol, said on Twitter that people “in uniform” removed Sobol from a taxi near a Moscow metro station this morning and took her to a police station.

Police also detained Navalny spokeswoman Kira Yarmysh, who is currently under house arrest on charges related to January protests in support of the politician. Yarmysh was detained near the entrance of her apartment building when she went out during the one hour she is allowed to leave, her lawyer, Veronika Polyakova, said on Twitter.

Navalny was arrested in January upon his return from Germany, where he had spent five months recovering from a nerve agent poisoning he blames on the Kremlin. Russian officials have rejected the accusation.

His arrest for an alleged violation of a suspended sentence from a 2014 embezzlement conviction triggered protests that represented the biggest show of defiance in Russia in recent years.

Soon after, a court ordered Navalny to serve 2 1/2 years in prison for the embezzlement conviction, which the European Court of Human Rights deemed to be "arbitrary and manifestly unreasonable."

William Lyon Mackenzie King set a record of service as a Commonwealth prime minister — 20 years, 10 months and 10 days. He retired the following November.

The Halifax-raised producer and filmmaker is nominated alongside composer and co-director Kris Bowers for the documentary short "A Concerto Is a Conversation."

He says the nominees are following a "very strict protocol" to attend the ceremony at the Union Station railway hub in Los Angeles.

The show will be held primarily at that venue but some elements will unfold at the Dolby Theatre in Hollywood.

International winners who can't attend will appear by satellite link from their location.

Proudfoot, who is 30, already lives in Los Angeles and, therefore, doesn't have to quarantine to attend the show, which airs on ABC and CTV.

"It's a sign of hope," he said of the Oscars deciding on a physical bash instead of an all-virtual one.

"I think three, four months ago it may not have been possible — even six weeks ago. In Los Angeles now, there's open enrollment for most people for vaccines. So I think it's the first inkling of things getting back to normal. Hopefully it's a great and safe evening. I'm sure it will be."

A Canadian on the team that just landed a probe on Mars and directed the first flight on the Red Planet says she's having the time of her life.

Farah Alibay, who grew up in Quebec, is one of the scientists working NASA's Perseverance Mars probe, which last weekend launched Ingenuity, a remote-controlled helicopter.

Nobody knew if the flight would work in Mar's thin atmosphere, which is one per cent of Earth's.

But Ingenuity stayed aloft for 30 seconds and achieved an altitude of three metres.

Alibay, who was in the control room when the successful flight was confirmed, says the moment was truly exciting and a lot of fun.

She says scientists around the world are now going to be asking themselves how they can use flying drones to learn even more about Earth's closest neighbour.

Alibay, who's 33, admits she's wondering how anything will be able to top the thrill of working on Perseverance.