In The News is a roundup of stories from The Canadian Press designed to kickstart your day. Here is what's on the radar of our editors for the morning of April 8 ... What we are watching in Canada ...
Apr 8, 2021 2:21 AM By: Canadian Press 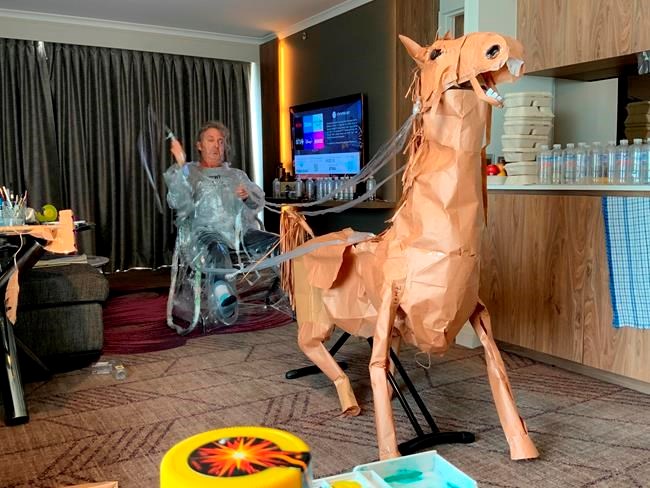 In The News is a roundup of stories from The Canadian Press designed to kickstart your day. Here is what's on the radar of our editors for the morning of April 8 ...

Premier Doug Ford announced the move yesterday, saying it was prompted by a surge in cases driven by more infectious variants.

Stores that sell goods such as groceries, cleaning supplies and pharmacy products can remain open but only to sell essential items.

Non-essential retail can open for curbside pickup or delivery only.

The province is declaring the third state of emergency since the start of the pandemic to invoke the new measures.

The changes come after a month-long shutdown announced last week was criticized as too weak to address the third wave of infections.

A group representing thousands of doctors from across the country is hoping the Liberal government's coming federal budget addresses a long-standing concern about lack of access to family doctors in Canada.

The Canadian Medical Association estimates about five million Canadians don't have a primary care physician, or family health-care team, which has spillover effects into other parts of the health-care system.

Among those trickle-down effects is people going to emergency departments, already stretched by the COVID-19 pandemic, for issues a family doctor could manage.

What the CMA is hoping for in the April 19 budget is $1.2 billion over four years to create more primary care teams for Canadians.

For the moment, the Liberals have sent signals that primary care won't be a primary issue addressed in their upcoming budget.

CMA president Dr. Ann Collins said it should be, particularly in light of the COVID-19 pandemic, and not just because the Liberals have promised to provide every Canadian with access to a family doctor.

He'll also nominate David Chipman, a former federal agent and adviser at the gun control group Giffords, to be director of the Bureau of Alcohol, Tobacco, Firearms and Explosives, according to senior Biden administration officials.

Biden has faced increasing pressure to act on gun control after a spate of mass shootings across the U.S. in recent weeks, but the White House has repeatedly emphasized the need for legislative action on guns. While the House passed a background-check bill last month, gun control measures face slim prospects in an evenly-divided Senate, where Republicans remain near-unified against most proposals.

Biden will be joined by Attorney General Merrick Garland at the event, and most of the actions will come from the Justice Department.

Biden is expected to announce tighter regulations requiring buyers of so-called “ghost guns” to undergo background checks. The homemade firearms — often assembled from parts and milled with a metal-cutting machine — often lack serial numbers used to trace them. It’s legal to build a gun in a home or a workshop and there is no federal requirement for a background check.

The president's plans were previewed by a person familiar with the expected actions who was not authorized to publicly discuss them.

Jordan's King Abdullah II addressed the unprecedented public rift within the royal family for the first time Wednesday, portraying it as an attempted sedition involving his half-brother that had been “nipped in the bud," but caused him anger, pain and shock.

The monarch appeared to be doubling down on the allegations against Prince Hamzah, a former crown prince, while at the same time trying to reassure Jordanians that the nation was returning to business as usual. But even if the current crisis is eventually defused, major challenges loom for the Western-allied monarchy as it confronts growing internal dissent.

Wednesday's statement, presented by a newsreader on Jordan TV, dealt with the internal crisis that erupted over the weekend when Hamzah was confined to his home and accused of being part of a plot to destabilize the kingdom.

Hamzah has denied the allegations, saying he was simply calling out long-running corruption and mismanagement in the kingdom.

The king said Wednesday that he was hurt by the recent events.

“The challenge over the past few days was not the most difficult or dangerous to the stability of our nation, but to me, it was the most painful,” he said. “Sedition came from within and without our one house, and nothing compares to my shock, pain, and anger as a brother and as the head of the Hashemite family, and as a leader of this proud people.”

By Day 3 of being confined to his Australian hotel room for quarantine, David Marriott was getting bored. He'd watched a few seasons of “The Sopranos” and his eyes were getting tired from reading.

Then his lunch arrived in a brown paper bowl and he thought “Aha. That's a hat waiting to happen.”

The paper cowboy was born.

Using the good quality paper bags his food was delivered in each day, Marriott, an art director on TV commercials, began fashioning an outfit. He added a brim to his hat, and then came the waistcoat and chaps. Next? A horse, of course.

He found an ironing board in his cupboard and tied on a desk lamp for the neck and head, creating a skeleton. Coffee pods became the eyes and nostrils. He named the horse Russell after an old dad joke: “Have you heard about the paper cowboys? They were caught and hung for rustling.”

The creative world Marriott made inside his Brisbane hotel room became more intricate by the day as he added plot lines in video clips he posted online. The Clingfilm Kid became the villain, out to steal Russell while he was sleeping.

Like Wilson from the movie “Castaway," Marriott says Russell can also be a sounding board.

“It's an existential conversation, quite philosophical,” he says. “Like, why are we here? What are we doing?”

And he's given the Rydges hotel staff a laugh by asking that Russell be taken for walks.

“It’s been cheering everyone up,” he said. “The hotel staff, they’re in hospitality but they have all these guests that they can’t see or interact with.”

The story behind Marriott's quarantine stay is more sobering. His dad Harry had a fall at his London home and was taken to a hospital, where he had an operation and was starting rehabilitation. But then he caught the coronavirus.

“I was really lucky my mom and sisters were there, and were allowed in to see him,” Marriott said. “I would Zoom with him at 3 a.m. To see him deteriorating was heartbreaking. But I was able to say goodbye and make peace.”

Marriott flew over from Australia for the funeral in what he says was a grim trip. Like other Australians returning home, he was required to quarantine at a hotel for two weeks.

Marriott said he's been making props his whole life. Even when he was a kid he used to get in trouble for breaking his dad's tools.

Because quarantine guests are considered potentially infectious, their food is delivered in disposable containers and plates that are discarded rather than recycled, which Marriott found a bit grating. But he said he's barely thrown anything out since his stay began, and has only needed to order in a few extras like sticky tape and clingfilm.

And when he leaves on Saturday, he's hoping to take Russell and his other creations with him. He said there had been interest from a film centre which wants Russell in an art show.

After all, he can just fold Russell up and pop him in his bag.

The Montreal Expos played their first regular-season game at New York's Shea Stadium. Home runs by relief pitcher Dan McGinn and third baseman Jose ``Coco'' Laboy helped the Expos edge the New York Mets 11-10. The Expos finished the season with a record of 52-and-110. The Mets overcame that opening loss to astound the baseball world by winning the World Series.

The Toronto Blue Jays will play their second straight home opener away from Rogers Centre tonight.

The Blue Jays will call their spring-training facility in Dunedin, Fla., home as they face the Los Angeles Angels.

Toronto will be playing out of 8,500-seat TD Ballpark for at least the first three homestands because of COVID-19 border restrictions.

The Blue Jays made Sahlen Field in Buffalo, N.Y., their home stadium last year. It normally is home for their triple-A affiliate.

The Blue Jays have said a return to Buffalo is possible later this season. The team hopes to return to Toronto at some point.

The Blue Jays are 3-3 on the season after losing two of three against the Texas Rangers in a series completed on Wednesday.

As if the COVID-19 pandemic hadn't produced enough ways to complicate life at the border between Canada and the United States, here comes another: whether or not to require proof of vaccination.

Debate is heating up in the freedom-focused U.S. about whether retailers, businesses and employers can and should require customers, workers and visitors to prove they've had a vaccine.

The discussion is also happening in Canada, a country some observers say is more attuned to the collective good than many of those in the land of life, liberty and the pursuit of happiness.

Where the two meet up, potential snafus abound.

"Some of these discussions could be very challenging," said Jack Jedwab, president of the Association for Canadian Studies and the Canadian Institute for Identities and Migration.

"I don't think that Canadians are going to look kindly on the idea that, you know, you could have significant numbers of people crossing the border that are unvaccinated."

This report by The Canadian Press was first published April 8, 2021