ARLINGTON, Texas — Steven Matz sensed the buzz from fans when warming up before his Toronto debut, then helped the Blue Jays ruin the home opener for the Texas Rangers before the largest MLB crowd since the pandemic.
Apr 5, 2021 7:08 PM By: Canadian Press 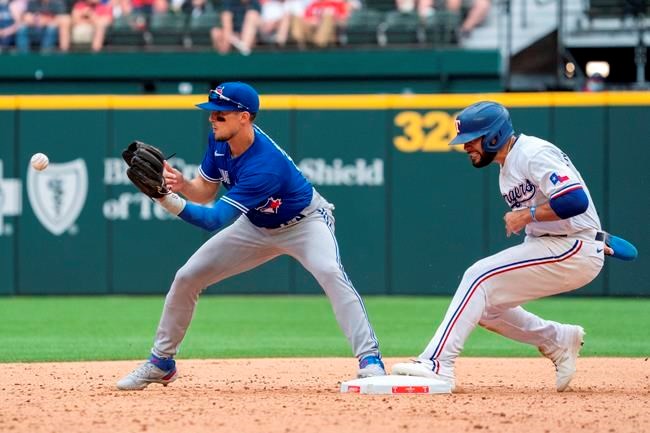 ARLINGTON, Texas — Steven Matz sensed the buzz from fans when warming up before his Toronto debut, then helped the Blue Jays ruin the home opener for the Texas Rangers before the largest MLB crowd since the pandemic.

Rangers fans didn't have much to cheer about, other than just finally getting to see their team play a regular-season game in the retractable-roof stadium that opened last year.

Marcus Semien and Cavan Biggio hit back-to-back homers early for the Blue Jays and Matz struck out nine while allowing only one run over 6 1/3 innings in a 6-2 win Monday.

“It was definitely cool, that extra little adrenaline warming up and getting into the game,” Matz said. “It was fun. It felt really good to have fans in the stands.”

The Rangers announced a sellout crowd of 38,283 for their 50th home opener in Texas, the second in $1.2 billion Globe Life Field that has a listed capacity of 40,518 — the announced attendance doesn't include complimentary tickets. They played all 30 home games in the stadium's debut season without fans last summer.

Major League Baseball allowed about 28% capacity for the National League Championship Series and World Series games that were played there exclusively last October, with the largest crowd being 11,472. The Rangers said last month they would allow full capacity after Texas Gov. Greg Abbott's order that allowed business in the state to operate at 100% capacity.

“It felt like a real game. It felt like back to the old days when we had full capacity,” Rangers manager Chris Woodward said. “Was hoping we’d see how loud our stadium got if we gave them something to cheer about. Unfortunately we didn’t do that.”

Dr. Ilan Schwartz, an infectious disease expert with the University of Alberta, says the large crowd still comes with risk for the fans.

"The fact is people are sitting next to each other, they're turning to each other and yelling in each other's faces, there's going to be (risk) for some infections. The risk for a mass infection occurring or for large numbers to be infected from is certainly much lower than if it was indoors, but even when an event is outdoors, there's still times where people are indoors. Anybody who's been to a toilet during a sporting event or a concert knows that."

"There's a lot of people packed in together in tight spaces and even though the stadium might be outdoors, that particular setting is going to be more of a concern and that would likely be that the sort of situation where I could envision a larger number of infections occurring."

Toronto, 3-1 for the first time since 2015, was ahead 4-0 in the second. Biggio went deep to right after a two-out, two-run shot by Semien off Texas starter Mike Foltynewicz (0-1).

Matz (1-0) allowed only two hits, walked one and hit one batter in an outing longer than any of the lefty's six starts last season while going 0-5 for the New York Mets, who traded him to Toronto in January. He ended his day with four consecutive strikeouts.

“That's the way he pitched in spring training. ... In command the whole time, that's what we need,” Blue Jays manager Charlie Montoyo said. “First start for the Blue Jays, it was awesome.”

Texas got its only run off Matz in the fourth on a single by new first baseman Nate Lowe, whose 10 RBIs in the first four games of a season are a franchise record. The hit scored Isiah Kiner-Falefa, who got a huge ovation when introduced as the Rangers' first starting shortstop in a home opener other than Elvis Andrus since 2008. Andrus was traded to AL West rival Oakland in February.

“It was nerve-wracking. It felt like my debut all over again,” Kiner-Falefa said. “Early in the game was probably the coolest moment of my career to this date."

Foltynewicz struck out seven (of his first eight outs) and walked three while needing 95 pitches to get through four innings. He went to full counts on six of the first eight batters he faced, and eight overall.

An NL All-Star in 2018 with Atlanta, Foltynewicz made only one start for Atlanta last season, allowing six runs in 3 1/3 innings before spending the rest of the season at the Braves’ alternate site. He signed a $2 million, one-year contract with the Rangers just before spring training.

“There was just a lot of things happened very quickly to kind of even get a feel,” Foltynewicz said. “ Just the anxiousness, big emotions, how far I came back from the last year and a half. This was a big moment. I’ve very glad I can get this out of the way, and just kind of get the season going and rolling.”

There were six different batters hit by pitches, four Blue Jays and two Rangers. Texas reliever Kyle Cody hit consecutive batters in the sixth, setting up Randal Grichuk's RBI single. One of the batters hit by Cody was Vladimir Guerrero Jr., on the pinkie, though Montoyo said he was fine. Guerrero had an RBI single in the first that put the Blue Jays ahead to stay.

Blue Jays: Danny Jansen was replaced at catcher in the seventh, an inning after he took a foul tip off the inside of his right knee. Montoyo said Jansen was already feeling better after the game and was day to day.

Right-hander Tanner Roark (2-3, 6.80 ERA in 11 starts last season) makes his season debut for Toronto. The Rangers use their second set of tandem starters when right-hander Dane Dunning, acquired when Lance Lynn was traded to the Chicago White Sox, makes his first Texas start. Lefty Taylor Hearn is expected to follow him.