DAN RALPH — He has a Grey Cup ring for every finger but it's Hugh Campbell's overall coaching success that's unlikely to ever be duplicated.
Mar 15, 2021 2:25 PM By: Canadian Press 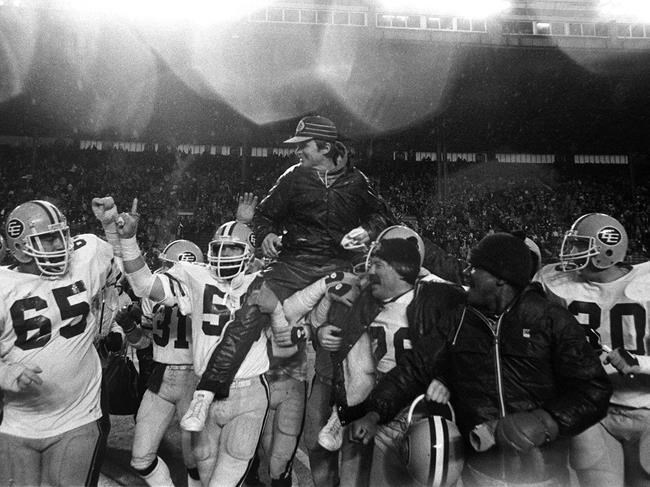 DAN RALPH — He has a Grey Cup ring for every finger but it's Hugh Campbell's overall coaching success that's unlikely to ever be duplicated.

Campbell was the Edmonton Football Team's head coach from 1977 to 1982, compiling a 70-21-5 regular-season record and leading the franchise to a Grey Cup appearance every year. The only blemish on a stellar 11-1 playoff mark is a 41-6 loss to Montreal in the '77 CFL final before an unprecedented five straight titles under Campbell, who later earned four more as a club executive..

Edmonton's final three Grey Cups under Campbell along with its '87 title with him as GM have been made available for viewing on the CFL's Grey Cup portal. Included is its stirring 26-23 come-from-behind '81 win over the upstart Ottawa Rough Riders.

On paper, that contest was a colossal mismatch. Edmonton (14-1-1) finished atop the West Division while Ottawa (5-11-0) was second in an anemic East Division behind Hamilton (11-4-1).

"George Brancato (Ottawa head coach) was a great friend of mine and an excellent coach," Campbell said. "Talking privately in the hotel he said to me, 'We're just so glad to be here, we're not even thinking we have a chance to win.'

"I can't say exactly what I said to him but it had something to do with him being full of something. We were (at the CFL awards banquet) a couple of nights before the game and George was on the stage saying the same thing to the audience. Right then I nudged my wife and said, 'We're in trouble.'"

"I wasn't really proud of our first half but I was proud of how we came back," Campbell said. "At no point did we not feel we didn't have a chance to win but that was part of our problem, probably.

"It (five straight Grey Cups) was exactly as hard as it was for us to win that game."

Edmonton's commitment to teamwork was evident following its walkthrough when the team bus became stuck in snow and ice. Players disembarked en masse to push it out.

"I can remember it happening," Campbell said with a chuckle. "Everything was a team effort with us."

After Edmonton's 32-16 Grey Cup win over Toronto in 1982, Campbell joined the USFL's Los Angeles Express. The following year, he reunited with former Edmonton quarterback Warren Moon as head coach of the NFL's Houston Oilers before returning to Edmonton as GM.

Campbell, 79, retired in 2006, capping a remarkable tenure in Canada that began as a receiver with Saskatchewan in 1963. After seven seasons and two Grey Cup appearances (including the Riders' first title win in 1966), Campbell retired as a player to coach at Whitworth College, in Spokane, Wash.

Surprisingly, Campbell was named the CFL's coach of the year just once (1979), an apparent victim of Edmonton's success.

"I think that's right … but I'd rather be the one with the Grey Cup," Campbell said. "Our slogan at the Grey Cup was we were going for the only award that they don't vote on.

"I don't want to take anything away from any of them (coach-of-the-year winners), my son (Lions head coach/co-GM Rick Campbell) has been voted coach of the year and I thought that year (2015 with Ottawa) they made a great decision. I'm all for whoever gets the award, I think they deserve it, and whoever doesn't, I think they could've won it."

Edmonton had roster consistency during its historic run with such proven stars as Cutler, punter Hank Ilesic, Moon, defensive stalwarts Dave Fennell and Dan Kepley, receiver Tom Scott and offensive linemen Hec Pothier and Bill Stevenson among those who played for all five championship squads. But it also added valuable pieces along the way, like acquiring Canadian running back Neil Lumsden from Hamilton in 1980 for quarterback Bruce Lemmerman.

"I promised Hamilton if they weren't in the Grey Cup against us, I'd give them a first-round draft choice in addition to Bruce Lemmerman," Campbell said. "I said, 'I'm giving you a ticket to the Grey Cup.'

"Neil is going to make us a football team that will be hard for you to beat but Bruce Lemmerman will make you hard for any other East team to beat. We met them in the Grey Cup (Edmonton won 48-10)."

But Edmonton's roster also featured many unheralded performers who were crucial to its success. At or near the top of that list was running back Jim Germany, a three-time 1,000-yard rusher between 1977-83.

"He was kind of our secret best player," Campbell said. "Most people don't remember his name probably unless they were a true fan but he was a great player.

"But there were so many others. Dale Potter, Tom Towns, Bill Manchuk, there's three linebackers who had Dan Kepley around them who got a lot of credit, which he deserved, but he had good support around him. Dave Fennell was a great player … if teams paid special attention to him, which they should've and usually did, then Ron Estay and David Boone were going to get there."

While Edmonton players and coaches were all business on the field, they also knew how to have fun.

"We were allowed to have a laugh or two and have a good time," Campbell said. "To have a rookie's car towed away during practice to make him think it was being confiscated or things like that."

It's hard to to imagine Edmonton's success being duplicated given CFL free agency and many players signing oneyear -deals. But Campbell says never say never.

“I don’t think it was (doable) back then, either," Campbell said. "Nobody had ever done it so everything’s doable.

"There'll be a team some day that wins more games or does better but there won't be one that was more together and more team-oriented. Some guys liked others better on the team but everybody was all one when it came to practice and games and have supported each other through life after football."