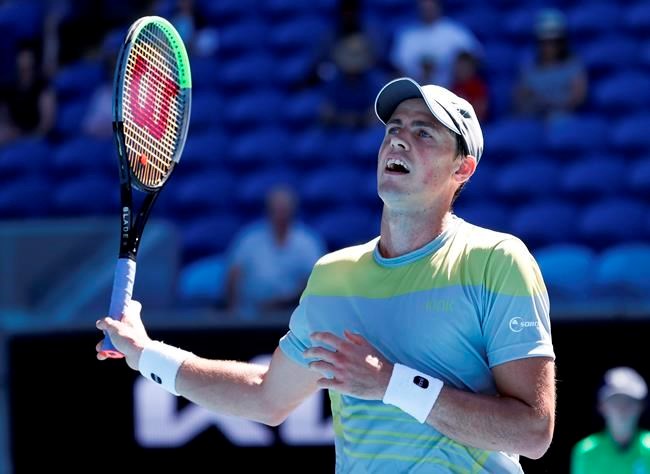 DUBAI, United Arab Emirates — Canada's Vasek Pospisil lost 2-6, 7-5, 6-4 to Hungary's Marton Fucsovics in the first round of the Dubai Tennis Championships on Monday.

Fucsovics, ranked 44th in the world, fought back from a break down in the second set to win.

Pospisil, from Vancouver, saved 10 of 13 break points he faced. The world No. 65 won 69 per cent of points on first serve, nine per cent below Fucsovics' clip.

The Hungarian will face No. 6 seed Pablo Carreno Busta of Spain in the second round of the ATP Tour 500 event.

Third-seeded Denis Shapovalov of Richmond Hill, Ont., got a first-round bye. He will face German Jan-Lennard Struff in the second round on Tuesday.

Meanwhile, Richard Gasquet defeated Marco Cecchinato 6-4, 6-2 in the first round for his 550th career victory on Monday.

The 34-year-old Gasquet saved the only break point he faced and converted three of his own to become just the sixth active player to reach the 550 mark. He will go for his 551st against Hubert Hurkacz for a place in the third round.

French compatriot Jeremy Chardy recovered from a set down to upset the ninth-seeded Alex de Minaur 2-6, 6-3, 6-4.

Struff defeated Mikhail Kukushkin 6-3, 6-2 for a second-round match against Shapovalov.

Bernabe Zapata Miralles of Spain beat John Millman 6-4, 6-4, while there were also wins for Alejandro Davidovich Fokina and Aljaz Bedene.

— With files from The Associated Press.