VANCOUVER — For Travis Green and his Vancouver Canucks, the win they gritted out on Sunday meant more than two points in the standings. The Canucks suffered the NHL's worst COVID-19 outbreak when the P.
Apr 18, 2021 9:42 PM By: Canadian Press 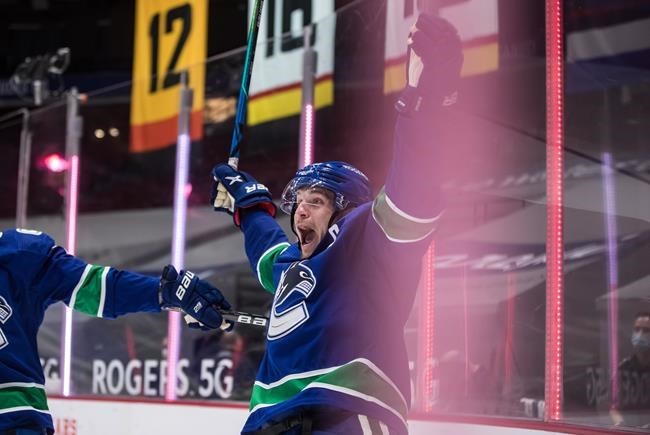 VANCOUVER — For Travis Green and his Vancouver Canucks, the win they gritted out on Sunday meant more than two points in the standings.

The Canucks suffered the NHL's worst COVID-19 outbreak when the P. 1 variant of the virus swept through the team late last month.

Twenty-one players and four coaches tested positive for the virus, one other player was deemed a close contact, and another received a false positive result. Family members — including one player's pregnant wife — also fell ill.

“This isn’t just your regular win during the regular season. It’s a special win," Green said after the Canucks edged the Toronto Maple Leafs 3-2 in overtime.

"We’ve gone through a lot here with our group over the last few weeks. It was a hard game. You’re playing a really good hockey team on the other side. I’m proud of our group and how we stuck with it and won tonight.”

Sunday marked the Canucks' first game since March 24. The matchup was originally scheduled for Saturday but the NHL pushed Vancouver's return back two additional days after forward J.T. Miller spoke out last week, saying players felt unsafe because they hadn't had enough time to recover from the outbreak.

Canucks captain Bo Horvat sealed the victory 1:19 into overtime, snapping a shot past Leafs goalie Jack Campbell. Horvat also had a goal and an assist in regulation.

“He was phenomenal," Green said. "What are you going to say? Two goals and an assist. You want guys to step to the plate and when your captain’s right at the front of the line leading the way, there’s a reason why he’s wearing a C on his jersey.”

The win was big not just for the players on the ice, but for their families and for the entire Canucks organization, Horvat said.

“I couldn’t be prouder of our guys in that room, the way they manned up tonight and stuck with the process and willed their way to that win," he said.

No Canucks players remained on the NHL’s COVID-19 protocol list Sunday. Nineteen were on the list at the height of the outbreak.

But some of Vancouver’s regular starters remained out of the lineup, including netminder Thatcher Demko, defenceman Nate Schmidt, and forwards Tyler Motte and Jake Virtanen.

The Canucks (17-18-3) looked shaky at times on Sunday and the Leafs took an early lead following a bobbled pass in the neutral zone.

The puck ricocheted off the stick of Vancouver right-winger Brock Boeser and was quickly gobbled up by John Tavares for an odd-man rush the other way. Tavares dishes it to William Nylander, who ripped a shot past Canucks goalie Braden Holtby to open the scoring 3:45 into the first.

The goal was Nylander's 14th of the season and the 100th of his NHL career. The 24-year-old right-winger returned to the lineup Sunday after missing five games due to COVID-19 protocols.

"I think I had a little stretch before I went into quarantine where I could have scored that 100th goal so it's nice to get that one early," Nylander said.

A solid performance from Holtby kept Vancouver in the game for much of the night. One of his biggest stops came midway through the second after Canucks defenceman Alex Edler was handed a five-minute major and a game misconduct for a knee-on-knee hit that sent Toronto left-winger Zach Hyman to the dressing room.

The veteran goalie had 37 saves to secure his fifth win of the season.

"I was proud of him tonight, the way he played," Green said. "To beat a team like Toronto with how long we’ve been out, you’re going to need a performance from your goalie. And he gave us an All-Star Holtby performance tonight.”

The victory was due to a "gutsy effort" from the entire group, Holtby said.

“I think it was one where we all just decided to go out there, you give it absolutely all you have, stick together and we believed we were going to have a chance to win," he said. "It was a fun one to be a part of."

Toronto finally beat the netminder with 19 seconds left in the five-minute man advantage. Auston Matthews collected a pass from Nylander as he powered to the net and chipped it up over Holtby's shoulder, hitting the crossbar on the way in.

It was the star centre's league-leading 33rd goal of the season. Nylander and Tavares each registered an assist on the play.

Horvat streaked into the Leafs' zone and unleashed a blast from the right faceoff dot, slashing Toronto's lead to 2-1 with his 15th goal of the year.

Rookie Nils Hoglander tied the game at 2-2 12:03 into the third, taking a crisp pass from defenceman Jalen Chatfield and popping it in past Campbell.

Chatfield's assist on the play was his first NHL point.

Campbell stopped 21-of-24 shots for Toronto on Sunday. The goalie said he feels as if he's been in a "bit of a slump" lately.

"I thought we played a really strong game," he said. "They battled hard. They were obviously in a tough situation and played hard and I thought our guys showed up and played. I felt a little bit better tonight and I just would like to have had a couple more so we got the two points."

The win was an important one for the Canucks in the standings. After more than three weeks without a game, Vancouver lingers at the bottom of the North Division, 10 points back of the Montreal Canadiens who hold the fourth and final playoff spot.

Toronto remains atop the division, four points ahead of the Winnipeg Jets.

The Leafs and Canucks will meet again in Vancouver on Tuesday.

NOTES: Jimmy Vesey and Travis Boyd played their first games against Toronto since being waived by the Leafs last month. … Left-winger Tanner Pearson returned to Vancouver's lineup after suffering a leg injury on March 17. … Before puck drop, the Canucks celebrated head equipment manager Pat O'Neill who was overseeing his 3,000th game. The team played a video with congratulatory messages from his daughters and a number of former Canucks, including Daniel and Henrik Sedin, Markus Naslund, Trevor Linden and Pavel Bure. O'Neill is the fifth trainer in league history to achieve the milestone.

This report by The Canadian Press was first published April 18, 2021.

Note to readers: This is a corrected story. A previous version misstated the record in the season series between the two teams.