TORONTO — Kyle Dubas is looking for a dance partner. And because of pandemic realities, the sooner the better for the general manager of the Toronto Maple Leafs.
Mar 16, 2021 3:51 PM By: Canadian Press 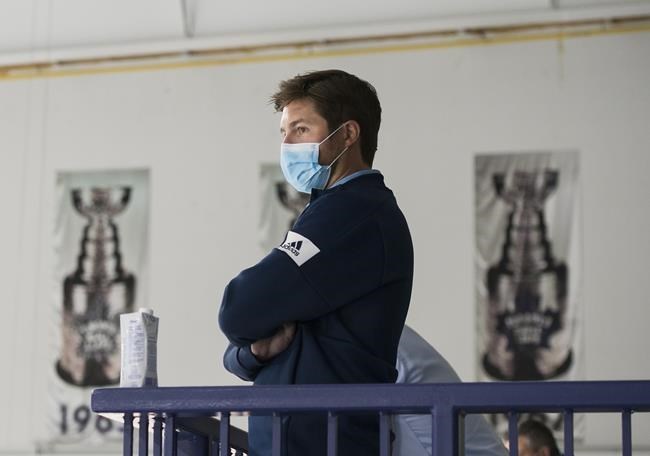 TORONTO — Kyle Dubas is looking for a dance partner.

And because of pandemic realities, the sooner the better for the general manager of the Toronto Maple Leafs.

With the NHL trade deadline less than four weeks away in a season truncated by COVID-19, Dubas said Tuesday he's examining various options with an eye toward improving a roster already loaded with offensive talent.

The Canadian border remains closed to non-essential travel, however, meaning any player acquired from an American-based team would have to observe a 14-day quarantine before stepping on the ice.

"It certainly provides an incentive to make the moves earlier," Dubas said on a video conference call with reporters. "It takes two to make that happen, though."

Dubas also made it clear he's willing to dip into his prospect capital — forwards Nick Robertson and Rodion Amirov, defenceman Rasmus Sandin, and Toronto's 2021 first-round pick likely fall under this umbrella — if a deal makes sense before the April 12 trade cutoff, simply and emphatically answering "Yes."

With the Leafs just past the schedule's midway point, Dubas spoke with reporters for nearly 40 minutes about the positives and negatives he's seen through 30 games.

There's been plenty of good with improved defensive structure, impressive results, and stretches of consistency not previously seen from this group. There's also been some bad — especially over the last week — for a franchise with designs on a long playoff run this spring and, if things go well, early summer.

Toronto sat atop the NHL's overall standings with a 18-4-2 record and a .792 points percentage on March 3 after beating the Edmonton Oilers 6-1 to complete a three-game, 13-1 romp over Connor McDavid and Leon Draisaitl's team.

"It showed what we're capable of," Dubas said. "The key is doing that as often as possible, and not just when you're concerned about an elite, offensive team with two of the best players in the game."

But since then, the Leafs, who still lead the division at 19-9-2 and a points percentage of .667, have lost five of their last six in regulation, including ugly back-to-back losses over the weekend.

"Great teams find a way to stop the bleeding and pull themselves out and use those as an opportunity to grow and improve and get better," Dubas said. "That's what I'm looking at now from our group."

Heading into his third trade deadline in charge, Dubas said he isn't "transfixed" on one area, but indicated adding talent up front to complement NHL goal leader Auston Matthews, Mitch Marner, William Nylander and John Tavares is a priority.

"I'm not precluding anything," Dubas said. "But I'd say most of the conversations are focused on forwards."

There's always a chance two teams in this season's one-time-only Canadian circuit — borne out of those same border restrictions impacting trades — could swing a deal, but that might be tough with at least five of the division's seven clubs still jockeying for playoff spots.

Dubas has historically tended to shoot for players with term remaining on their contract instead of acquiring pure rentals at the deadline, but that isn't necessarily the case this time with the salary cap almost assuredly staying at US$81.5 million for at least the next few seasons as the NHL dusts itself off from the pandemic's economic beating.

"It's a rare time where probably a rental is a better fit," Dubas said. "(But) if there's something we feel can improve our team long-term, we'll find a way to make it work."

One area of concern raised Tuesday was Toronto's goaltending, which has been basically average for the better part of the last two seasons. No. 1 option Frederik Andersen already missed time with a lower-body injury in 2021 — he's returned to the lineup, but still clearly playing through whatever's bothering him — while backup Jack Campbell (leg) has suited up just once since January.

"(Andersen) has a tremendous ability to gather himself when he may not be playing to the standard that he sets for himself," Dubas said. "I have a lot of faith that Fred, over time, has continually shown us that he's been able to find his way out of it, and that he will."

In terms of when to pull a trigger on a trade, especially in a year where a Canadian team is guaranteed a conference final berth and there's no date with the Boston Bruins or Tampa Bay Lightning looming in the first two rounds, Dubas said players usually let their GMs know when the time is right.

"The great teams or the teams that have great seasons and go on great runs, they all deal with these types of stretches, and they deal with them very, very well," Dubas said of Toronto's current slide. "If our group can do that in combination with what they showed at the beginning of the year, I think the onus will be on me to do everything within reason."

The road map Dubas laid out after taking over the Leafs — locking up four high-price forwards in Matthews, Tavares, Marner and Nylander, and playing a fast, puck-possession, four-line game — has been poked, prodded and dissected in hockey's biggest market since the spring of 2018.

Recent results aside, Toronto is in good shape 30 games into this season like no other, but Dubas is a long way from taking even the smallest of victory laps.

"There have been times when I think I haven't done a good enough job whatsoever in helping the team," he said. "The goal for the group is high performance sustained year after year. I only think after that time would I ever feel any sort of vindication. And even still, I'd still be trying to drive to continue that as long as we can.

"Any criticisms are warranted until we reach that point. And I don't take them personally at all."

This report by The Canadian Press was first published March 16, 2021.