Leafs, Habs will face off in long-awaited playoff rematch, Oilers will face Jets

The hype around the first playoff series in 42 years between the Maple Leafs and the Montreal Canadiens doesn't appear to have made its way into Toronto's dressing room.
May 12, 2021 2:59 PM By: Canadian Press 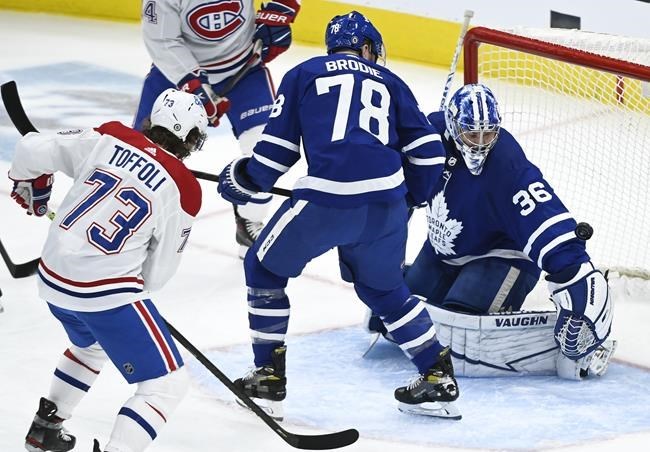 The hype around the first playoff series in 42 years between the Maple Leafs and the Montreal Canadiens doesn't appear to have made its way into Toronto's dressing room.

"We didn't even bring it up or discuss it this morning," Leafs coach Sheldon Keefe said after the Maple Leafs' skate on Wednesday.

The Original Six rivals were confirmed as first-round playoff opponents Tuesday night when the Winnipeg Jets beat the Vancouver Canucks 5-0.

That result locked in the top four teams in the North Division and set up the matchup between the division-leading Leafs and the fourth-pace Habs, as well as the second-seeded Edmonton Oilers and the third-place Jets.

Toronto and Montreal, who built up a rivalry as the only two Canadian teams in the NHL from 1938 until Vancouver's addition in 1970, have met 16 times in the playoffs, with the last showdown coming back in 1979 when Montreal swept Toronto in the quarterfinals en route to winning the Stanley Cup.

While media and hockey fans seem to be buzzing about the upcoming matchup, the response among the Leafs who spoke on Wednesday was, perhaps predictably, far more muted.

"It's Leafs versus Habs. It's everything you want in a playoff series," said defenceman Travis Dermott, before punctuating his endorsement with an "I guess."

"I mean, you could look at all the history and probably leave it at that," added Dermott, who was born 17 years after the last playoff meeting between the clubs.

Maybe it's a case of the coaches and players sticking to the script before a potentially testy post-season showdown. Or maybe the rivalry has simply been diluted over time.

Certainly none of the players were alive when that 1979 series took place, but neither was Keefe. Habs coach Dominique Ducharme, meanwhile, was only six years old.

Also, the playoff détente comes despite the Leafs and Habs playing in the same division since the 1998-99 season, largely owing to one club being in ascendancy while the other was in decline over that span.

Over that time, a shared provincial home plus four testy playoff series made enemies of the Leafs and the Ottawa Senators. Meanwhile, the Canadiens have continued a famous rivalry with the Boston Bruins, facing them 17 times since dispatching the Leafs in '79.

Of course, the much-anticipated Habs-Leafs series will be played in front of zero fans because of COVID-19 restrictions. Bars and restaurants also are closed for in-person activity, preventing what would normally be big nights for downtown establishments in both cities.

Regular-season games between the two teams normally are hot tickets, with plenty of travelling fans typically making the trip down Hwy. 401.

While not outwardly showing a great deal of enthusiasm for the series, Keefe did acknowledge that it was beneficial for the Leafs to know who their first-round opponent would be.

"We just played Montreal four times so we know what to expect there in that sense," he said. "Of course we know their roster will look different and they'll be a much more rested team when we see them again.

"We've got two regular-season games to play this week, and we're just remaining focused on that."

Canadiens goaltender Jake Allen, meanwhile, did seem to think the series carried a sense of occasion.

"To be able to play the Leafs in the first round of the playoffs, even just playing the Leafs in general, is a special feeling," he said. "It's been such a long time since that's happened. We've got to cherish it.

Allen said it would also be an opportunity to balance the books with the Leafs, who won the season series 7-2-1.

"They got our number in the regular season, but this is a new chance and a new chapter," Allen said.

The Jets will be facing the Oilers for the first time since the NHL returned to Manitoba's capital in 2011-12.

The original Winnipeg Jets faced the Oilers six times in the post-season between 1983 and 1990, with Edmonton winning each time.

And once again, the Jets will be facing an Oilers team led by the presumptive best player in the world. In the 80's it was Wayne Gretzky. Now it's Connor McDavid, who needed just 53 games to reach the 100-point mark this season.

Edmonton went 7-2-0 against the Jets this year, with McDavid piling up seven goals and 15 assists over those games.

"It's not as if we don't know them, we've played them nine times this year. We know them well, they know us well, so it'll be a good series."

This report by The Canadian Press was first published May 12, 2021.