ST. JOHN'S, N.L. — There will be rowers gliding across Quidi Vidi Lake in St. John's this summer, but it's not yet known if they'll be able to compete in the city's historic regatta. In a lakeside boathouse shrouded in fog Friday, Royal St.
Apr 9, 2021 8:44 AM By: Canadian Press 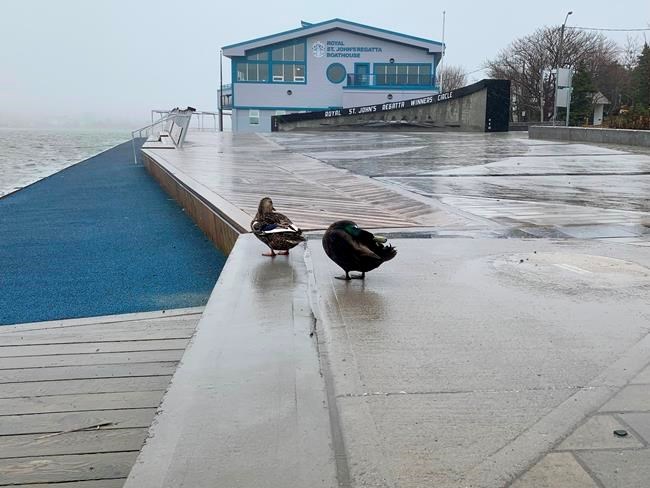 ST. JOHN'S, N.L. — There will be rowers gliding across Quidi Vidi Lake in St. John's this summer, but it's not yet known if they'll be able to compete in the city's historic regatta.

In a lakeside boathouse shrouded in fog Friday, Royal St. John's Regatta committee president Bradley Power said it's a huge step forward to have boats back on the water this summer after the pandemic forced the cancellation of all activity last year. As for whether the famous day of races will go ahead, Power said he's optimistic.

"The last time that we had a regatta cancelled was back during the Second World War," Power told reporters. "When it came back after the war, it was a signal that things had gone back to normal. And while we're not back to normal, I think we're getting there."

Rowing will resume on May 3 and all rowers, coaches and coxswains will be required to follow strict COVID-19 safety protocols, Power said. Rowing times will also be extended so teams are able to sanitize their boats and equipment, he said.

Crews must wear masks until they push their boats off from the docks. The COVID-19 pandemic forced organizers to cancel last summer's entire rowing season as well as the regatta itself.

Power said this year, the committee is looking at a variety of options to help the races go ahead, including a possible postponement of the races until fall, or an event without the so-called "garden party" extras set up along the lake. "I know the public is certainly interested ... and they can rest assured that we're going to do everything we possibly can," Power said. "Right now, with the way things are on the mainland and elsewhere, holding a 30,000 or 40,000-person event just doesn't make sense. It's not safe, there's too much risk."

The Royal St. John's Regatta bills itself as the longest-running continuous sporting event in North America. The first record of the organized rowing races in St. John's was in 1816, and the committee celebrated the event's 200th anniversary in 2018.

The event is traditionally held on the first Wednesday in August. All along the lake, vendors set up booths selling food or running games of chance. The event draws tens of thousands of people, whether they're interested in rowing or not. Regatta Day is now a floating St. John's civic holiday subject to change if adverse weather delays the racing.

This report by The Canadian Press was first published April 9, 2021.