The Old Fort landslide continues to slow, moving just half a metre over the last 24 hours, according to the Ministry of Transportation and Infrastructure. The ministry is currently building a temporary road through the landslide debris.
Oct 26, 2018 11:24 AM By: Alaska Highway News Staff 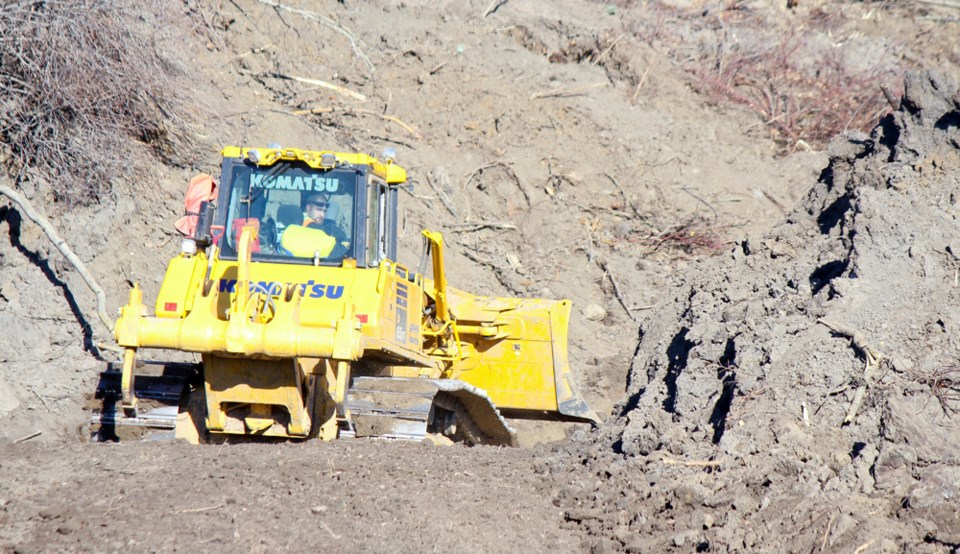 The Old Fort landslide continues to slow, moving just half a metre over the last 24 hours, according to the Ministry of Transportation and Infrastructure.

The ministry is currently building a temporary road through the landslide debris.

"The area surrounding the temporary road that is being built is stable for crews to work. Safe work procedures are in place, including ongoing slide monitoring," the ministry said in an update.

"Even though the road area has stabilized, we need to ensure that the geotechnical report deems the whole area safe for residents to return. The Peace River Regional District expects to receive the report this week and will need to review the findings to determine next steps."

An evacuation order remains in effect for most of the Old Fort community.

Temporary permits were issued Thursday that allowed 20 homes to have their natural gas service restored, the regional district said. Power was restored to the community earlier this week.

Geologists hired by the regional district said this week the landslide started because of failure in the bedrock where a gravel quarry had been operating on the hillside above Old Fort.

The ground underneath the slide had been moving for months before it finally let go in a massive collapse Sept. 30, pushing more than eight million cubic metres of earth down through a gully and destroying the only road access to Old Fort the slide made its way to the Peace River. More than 150 residents were forced to evacuate.

Residents were also told that a draft report assessing the Sept. 30 landslide and identifying ongoing hazards is nearing completion and will then be analyzed by an independent geotechnical firm, which may provide additional recommendations.

The regional district says the draft report on the slide could be ready by late Friday but a delay is possible because provincial agencies recently forwarded "significant additional data" to the company preparing the study.

"When dealing with public safety, it is important to be right, rather than expeditious," the post said.

In addition to assessing ongoing hazards, the regional district says Westrek Geotechnical Services will make recommendations "regarding whether it is safe for residents to return to their properties and under what conditions."

The office says Westrek's entire report, any recommendations from the independent geotechnical firm, plus any comments from provincial agencies will then be sent for a legal review before being returned to the regional district board for careful consideration.

"The report will provide guidance to the residents of Old Fort about the safety of their community with regards to the landslide risk," the post said, although it provides no timeline for completion of the process.

Meanwhile, the Ministry of Energy, Mines and Petroleum Resources told StarMetro Vancouver that the evacuation order has stalled a review of the gravel quarry and its operations.

“The ministry … has classified the slide as a dangerous occurrence under the Health, Safety and Reclamation Code and required a geotechnical assessment by a professional engineer,” the ministry said.

By classifying the slide as a dangerous occurence, the ministry has power to order the owner of the site to undertake a third-party assessment by independent geotechnical engineer under that code, the StarMetro reports.

— with files from Canadian Press